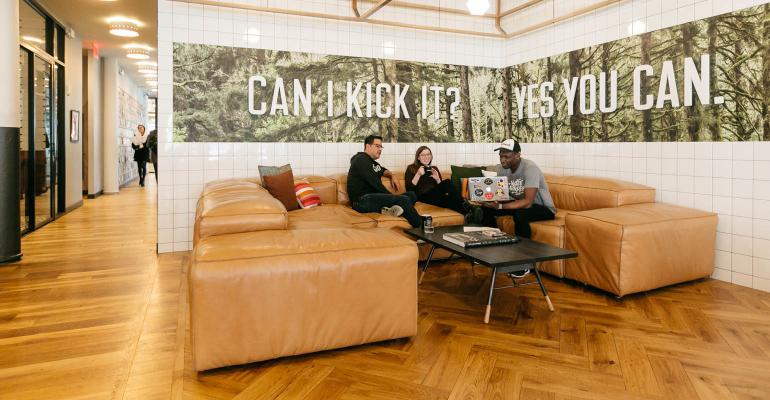 What Does WeWork’s New Service Line Mean for the Brokerage Business?

While WeWork hasn’t openly billed the program as a brokerage service, some in the industry view the move as a way to change the brokerage business.

In September, co-working giant WeWork will be launching a program called WeWork Space Services in New York City to help small- to medium-sized companies find office space—whether they become WeWork members or not.

While WeWork hasn’t openly billed the program as a brokerage service, some in the industry view the move as a way to change the brokerage business—for the better.

“Brokers are going to have to evolve with this disruption in the industry,” says Billy Woodward, a Denver-based vice president with real estate services firm Transwestern who focuses on office agency leasing.

The launch of WeWork’s new business line comes at a time when the office sector, which has seen waning demand as a result of workstyle changes, has become more service-oriented, with co-working companies offering flexible office space and more services for tenants than traditional office leases.

“I’m surprised they haven’t started this a while earlier, because there are brokers in the world that have mined [WeWork’s] community for tenants,” says Jay Caseley, a partner at ABS Partners Real Estate LLC, a New York-based real estate services firm.

In the announcement of WeWork’s new business, company Chief Growth Officer Dave Fano noted that the program would be a “one-stop solution” for end users. The pilot is also supposed to benefit WeWork’s landlord partners by bringing them new tenants. “WeWork Space Services will allow us to retain our relationships with existing members who would otherwise have left a WeWork space by providing them with alternate real estate solutions, while benefiting from continued access to our network and community,” Fano wrote.

And in this late stage of the real estate cycle, betting on the brokerage business may be a way for WeWork to hedge against a downturn. Some companies may shrink back their excess space or pull back on expansion space, the type WeWork provides, notes Peter Muoio, chief economist with online real estate marketplace Ten-X. “It changes the nature of their revenue cyclicality, to be much more contemporaneous with the cycle,” he says.

But the move into brokerage could also test the relationships between the co-working firm and traditional brokers. Brokers from large, traditional firms have big tenant bases that WeWork would likely want to tap into, notes Paul Leonard, managing consultant at real estate research firm CoStar. For their part, the brokers will likely be watching WeWork’s rapid growth, while also figuring out ways to work together. “I don’t think it’s a good idea to make an enemy of the brokerage community,” Leonard says.

“WeWork Space Services is intended only for the small to medium business segment, the overwhelming majority of whom generally approach WeWork directly. Furthermore, it will not represent tenants if they already have a broker,” a WeWork spokesperson wrote in an email. “As such, we are confident that the strong relationships we enjoy with brokers will not be impacted.”

WeWork currently gives commissions to brokers if they connect the company with tenants through its Broker Partnership Program.

Woodward, of Transwestern, says that brokers can no longer rely on touring clients and trying to close deals with asset managers—now, they have to be consultants. “If we want to be competitive, we have to be in front of it,” he says.

In the announcement post, Fano wrote that the move signals WeWork’s strong belief in the brokerage business. “Brokers are critical partners for WeWork, and we will continue to rely on, and partner with, them to bring clients to our community,” he said.

Caseley, of ABS Partners, says he views WeWork as a respected competitor. “I look forward to working with them, and I hope they bring us some tenants,” he says.

WeWork’s expansion has particularly impacted the office sector. For example, Caseley, who focuses on the Midtown South market, has seen administrative tasks shift more to landlords from tenants, and landlords become more service-oriented. This comes with extra costs, and office rents have risen as a result, he says. “It’s hard to keep up with them,” Caseley notes. “Generally, I think it’s for the better and it keeps us more alert.”

WeWork has also started other lines of business recently: it partnered with 2U Inc., an online education provider, to provide students enrolled in online degrees with a place to work; it’s launching a private elementary school inside a New York City WeWork location; and it continues to grow its WeLive business, offering flexible apartment leases to tenants.

Other co-working firms are also growing. Convene, which was started a year earlier than WeWork and focuses on flexible meeting and working space, recently raised $152 million from investors in a Series D round that values the company at more than $500 million, Bloomberg reported.