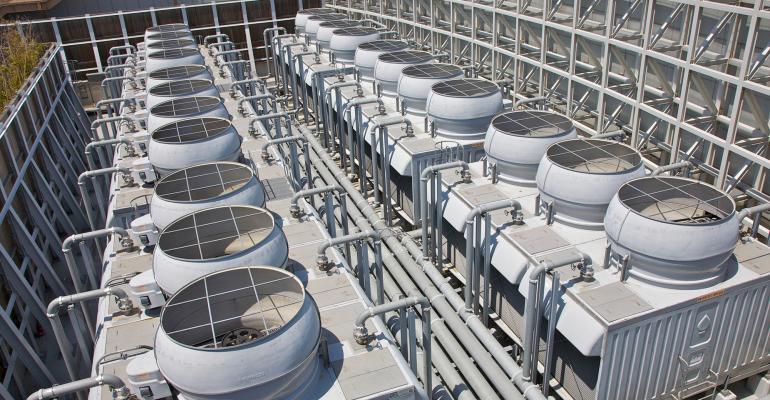 Many of the methods to reduce pathogens have been around for years, such as UV light and bipolar ionization.

(Bloomberg) -- The long-staid world of HVAC is suddenly in the spotlight.

With research showing the coronavirus may spread through shared air, property managers are rushing to upgrade heating, ventilation and air conditioning systems before reopening buildings. That’s leading to costly upgrades for equipment that armies of professionals used to take for granted.

Building specialists are poring over how well heavy-duty filters block microbes and considering whether to install systems that use ultraviolet light or electrically charged particles in the ductwork to kill the virus. Companies including Honeywell International Inc., Carrier Global Corp. and Trane Technologies Plc are benefiting from the surge in demand, offering everything from air-monitoring sensors to portable filter machines to help make up for deficiencies in ventilation.

“Every building is going to have some kind of solution. Is it going to be 100%? No,” said Hani Salama, head of the New York chapter of the Building Owners and Managers Association. “But it’s going to be better than what they have now, and will help mitigate some of these airborne transmission issues that everybody is afraid of.”

Much of the concern for buildings has been centered on whether the virus can spread through surfaces, prompting remedies such as new cleaning procedures, gallons of hand sanitizer and touchless doors and bathroom fixtures. However, more than 200 researchers have urged the World Health Organization to recognize the disease can spread through air currents.

A study this spring led by researchers at the University of Oregon found the presence of the virus in a quarter of HVAC systems in hospitals that treated Covid-19 patients. The findings suggest the potential for transmission from shared air from locations separate from the infected person, the authors said.

Not all experts agree. The virus would be diluted and decayed even if it were to get into the air ducts, making them ineffective conduits, said Edward Nardell, a Harvard University professor who researches airborne transmission. He’s more concerned with people returning to buildings with inadequate air circulation, which can allow the virus to linger in a room.

For building owners, the trade-offs abound. It’s best to let in more fresh air, but that puts a strain on cooling or heating. Dense filters that trap more microbes are coveted, yet can choke off airflow and worsen ventilation if a building’s fans aren’t powerful enough. And most solutions require more energy consumption.

Building-safety products are proving to be a bright spot for sales at companies like Honeywell, which has technology for “frictionless entry,” automatic temperature-taking and sensors that monitor air quality. Carrier, which specializes in HVAC and reports earnings this week, has seen its stock more than double since its separation in March from the former United Technologies Corp.

“We’re seeing a very huge demand,” said Manish Sharma, chief technology officer for Honeywell’s building technologies unit. “Everyone wants to see how you can get back to business.”

Air conditioning upgrades are a top priority for landlords, said Salama of the New York association, even as it’s unclear when office workers will return. His company, Capital Properties, is swapping out 900 air conditioning filters at its two Manhattan office buildings for double the price it would normally pay.

Many of the methods to reduce pathogens have been around for years, such as UV light and bipolar ionization, which releases electrically charged atoms that attach to and neutralize viruses and bacteria. Those technologies were geared more to hospitals than commercial buildings, which put more of an emphasis on saving energy than killing germs. That’s changing now.

Allan Reagan, chief executive officer of Flix Brewhouse, adopted elaborate protocols for sanitizing and creating social distancing at his 10 dine-in movie houses. As the risk of airborne spread drew more attention, he hired Trane Technologies to install bipolar ionization for all 87 of the company’s screening auditoriums, at $1,500 a piece.

A study showing the system kills as much as 99% of pathogens won Reagan over, and Flix Brewhouse opened in San Antonio to the public for two weeks to try the system. He said the venue had about 700 visitors, including 50 employees, and he hasn’t heard of any Covid cases that arose. All of Flix’s theaters are closed for now, mainly because of a lack of new films from Hollywood, he said.

“We tried it out, declared victory, and we’ll come back when we have some good content,” Reagan said. “In the meantime, we’ll be retrofitting our other theaters. So when they reopen we’ll have this technology across the circuit.”

Fredric Lubit, a dentist with two offices in New Jersey, purchased four Carrier OptiClean air scrubbers at $4,500 each. The machine, which looks similar to a tall filing cabinet, sucks air though a high-efficiency particulate air, or HEPA, filter. He also purchased a $10,000 machine for each office that saturates a room with UV light for two minutes to destroy microbes.

Carrier began designing the OptiClean in March by hot-rodding the inside portion of a residential HVAC system with a bigger fan and motor, along with other parts. The product was initially aimed at hospitals, but demand is now coming from schools and small offices, said Chris Nelson, president of Carrier’s HVAC unit, who declined to provide sales numbers.

It’s unclear whether the virus could squeeze through. While studies have shown HEPA filters can block particles as small as 0.1 micron, tiny enough for the coronavirus particles that can float on air, the rating on the heavy-duty filters is only for particles the size of 0.3 microns, according to a July 9 paper by consulting firm McKinsey & Co.

For Lubit, the outlay is still worthwhile.

“You can’t put a price on your health, your staff’s health and, in my case, patients’ health,” he said.

--With assistance from Michelle Fay Cortez.

To contact the reporter on this story:
Thomas Black in Dallas at [email protected]loomberg.net

To contact the editors responsible for this story:
Brendan Case at [email protected]
Kara Wetzel