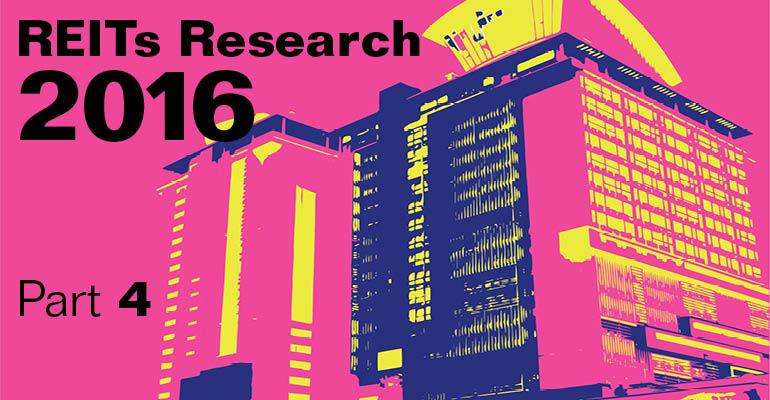 Those REITs that are more actively pursuing joint venture capital are generally in the mall, office or industrial sectors, which are trading at greater discounts to NAV, notes Kaspar. For them, accessing the public equity markets really isn’t the best alternative when they can get lower cost of capital and higher private market pricing on their properties through a joint venture structure, he says.

One of the most notable joint venture announcements this year includes Welltower’s joint venture with the Canada Pension Plan Investment Board. The two entities are teaming up to buy a 97.5 percent stake in six Florida-based seniors housing properties for a combined price of $555 million.

Forest City Realty Trust also announced in early April that it had completed the second of three previously announced regional mall joint ventures with QIC, one of the largest institutional investment managers in Australia. Combined, QIC will invest $90 million in the three Forest City projects. QIC has acquired a 49 percent equity interest in Ballston Quarter, a 578,000-sq.-ft. regional mall in Arlington, Va. that Forest City is redeveloping. The joint venture also includes QIC’s investment in Ridge Hill mall in Westchester, N.Y. and a still pending investment in the Shops at Wiregrass near Tampa, Fla.

There also can be some downside to REITs’ use of joint ventures. Bringing in a joint venture partner does not offer the same opportunity to achieve maximum pricing as compared to a competitive bid situation. Another risk for REITs is that they become too dependent on the joint venture structure, notes Edward Mui, a REIT equity analyst at Morningstar. Such structures can become a problem with transparency in financial reporting. “It makes it tough for an analyst or investor looking at financial statements to be able to extract the relevant information depending on the level of disclosure that each REIT chooses to practice,” he says.

When it comes to deploying capital that REITs have built up, just more than half of respondents (51 percent) said redeveloping or repositioning assets was what REITs should be doing with their cash. Other top responses included paying off debt (44 percent), acquiring assets (32 percent) and investing in core operations (24 percent).

In terms of managing portfolios, there is not much clarity in the market on what REITs will do. About 30 percent of respondents said they expect REIT portfolios to remain stable. And then about a quarter of respondents (26 percent) said REITs would be net acquirers, but an equal number (26 percent) said they would be net sellers. Additionally, 17 percent admitted they weren’t sure what REITs would do with their portfolios.