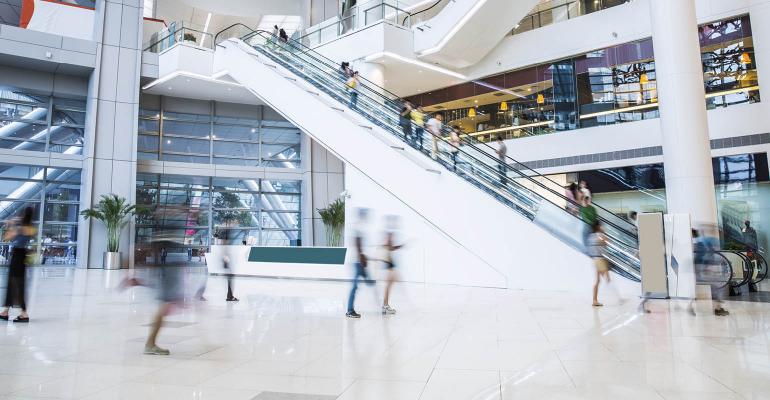 The struggles the sector faces show no sign of abating, according to exclusive NREI research.

Retail real estate’s troubles in recent years have been well-documented. Online sales continue to eat away at brick-and-mortar activity. Many chains are struggling, forced to scale back on stores or go out of business entirely.

The results from NREI’s fourth retail real estate survey reveal that the outlook from retail operators, investors and developers continues to be bleak. Sentiments on cap rates, occupancies and retail rents all declined from past years. And respondents see retail as having the dimmest outlook of any of the major property sectors.

On a scale of one to 10, with 10 being the most attractive, retail scored 5.5 in this year’s survey. The number has dropped for three consecutive years and leaves retail at the bottom of the list compared to office, industrial, multifamily and hotels. And whereas in past years the spread between the top and bottom property types was not that great, retail’s score in this year’s survey is well below the highest-scoring sector (industrial), which rose to 7.6.

In fact, the scores for those sectors are two sides of the same coin, with industrial’s prospects rising directly in concert with retail’s struggles as the ever-growing volume of online sales fuels the lackluster results at many brick-and-mortar outlets.

In an open-ended question, survey respondents were asked what kinds of retail assets currently offer the potential for the highest yields. Many respondents identified single-tenant net lease assets occupied by necessity retail tenants and big-box stores.

“Retailers are right-sizing their stores, creating supply concerns, which provides opportunities for better yield to those able to handle the uncertainty,” one respondent wrote. Another added, “If you’re going to be in retail it should be the standalone store—the owners of those kinds of businesses are still willing to take the risk.”

In a recent report, Moody’s Investors Services found that there were nine retail corporate defaults in the first quarter, marking a record high.

Coresight Research, a retail think tank, found that there have been 3,264 major U.S. store closure announcements year-to-date and 1,699 store openings, with Dollar General leading the way. Last year, there were 7,066 announced store closures—RadioShack shuttered the most locations. There were 3,157 openings, with Dollar General again opening the most stores.

In terms of multi-tenant retail spaces, a number of respondents identified grocery-anchored shopping centers as continuing to be attractive assets, “particularly those anchored by supermarkets, gyms and other ‘internet-proof’ tenants” as one respondent explained.

Some respondents added that the best yields might come from converting existing retail assets into other uses. “For example, big boxes that could be used as distribution warehouse or retail that could be converted into creative office space,” one responder wrote.

Responses to the survey signal that there is both less debt and less equity targeting the retail real estate sector. In all, 33.0 percent of respondents said equity is less available than 12 months ago and 34.2 percent said debt is less available. A plurality in both cases said levels were unchanged (42.3 percent for equity and 42.5 percent for debt). Meanwhile, only 12.7 percent of respondents said equity is more widely available and 13.3 percent said debt is more widely available.

In looking at specific financing aspects, respondent sentiment varied. Overall, 91.8 percent answered that they expected rates to continue to rise. Another 8.2 percent expect them to remain flat. No respondents said they would decrease.

As with cap rates, respondents’ expectations for occupancy rates on a national level were more bearish than on the regional level.

Retail vacancy levels stayed relatively flat for the first quarter of the year, according to preliminary data from real estate research firm Reis. For neighborhood and community shopping centers, the vacancy rate averaged 10.0 percent, the same as the quarter before. Meanwhile, the vacancy rate for regional malls rose 10 basis points from the fourth quarter to 8.4 percent.

This rate has remained relatively unchanged for several quarters, signaling that 2018 is not likely to see a major disruption to retail occupancies, says Barbara Byrne Denham, a senior economist at Reis. Denham points out the particularly rough start the retail sector saw in 2017. “It can’t get that much worse,” she says.

In an open-ended question, respondents were asked to identify their biggest concerns for the sector in the next 12 to 24 months. Among the most common responses were Amazon specifically and e-commerce more broadly; the ongoing string of bankruptcies and store closings; and concerns about what rising interest rates might mean both for consumer spending and industry fundamentals.

The outlook for rents has also steadily declined each year of the survey. For the first time, only a minority of respondents (41.9 percent) said they expect retail rents in their regions to increase in the next 12 months. (The figure peaked at 77.9 percent in the 2015 edition.) Meanwhile, a new high of 31.3 percent said rents will remain stable. And more than one-quarter of respondents (26.8 percent) said they expect rents to fall. In contrast, only 1.6 percent of respondents in our initial survey expected retail rents to fall.

Asking and effective rental rates for neighborhood and community shopping centers increased, but barely, by just 0.4 percent from the fourth to the first quarter, Reis data shows. Net absorption remained positive as well, but also represented the lowest quarterly total in more than five years. For malls, rents rose by 0.5 percent.

A bright spot for the sector remains overall supply. As in past years, respondents indicated that development is in check, with less than one-fifth of industry pros saying there are too many projects on the books.

With additional reporting by Mary Diduch.

Survey methodology: NREI emailed commercial real estate professionals requesting participation in an online survey about retail real estate. Overall, the survey received 391 responses, half of whom identified as Owner/Partner/President/Chairman/CEO/CFO. In addition, 47 percent of respondents operate in the East, 46 percent in the South, 42 percent in the West and 34 percent in the Midwest. (Respondents could select all regions that applied.)