The movie theater operator paid 67.63 percent of its total rent due during the month. While some movie theaters were able to reopen locations earlier in the year, the new surge in virus cases is resulting in repeated shutdowns.

High-end fitness apparel seller Lululemon Athletica has remained popular with shoppers through the pandemic, but the company still paid only 67.35 percent of its November rent. During the second quarter, the most recent period for which numbers are available, net revenue from company-operated stores fell by 51 percent. Overall net revenue, however, rose by 2 percent.

The apparel chain paid 65.52 percent of its rent in November. The Gap’s net comparable sales were up 5 percent in the third quarter of 2020, but that increase was driven largely by its online business, which accounted for 40 percent of its sales during the period. The company’s plan is to have 50 percent of its sales come in from its e-commerce division by 2023.

The upscale gym operator paid 64.97 percent of its rent for the past month. Gyms have been among the retail tenants most adversely impacted by the pandemic, as both enforced closings and customers’ fears of contagion have significantly driven down traffic and membership fees.

The hair salon franchise paid 62.29 percent of its rent in November. Hair salons, like gyms, have been among the retail establishments most impacted by lockdowns and lower customer traffic.

GNC paid 60.99 percent of its total rent due last month. The bankrupt vitamins and health supplements seller narrowly avoided an auction sale in September when it was acquired by Chinese firm Harbin Pharmaceutical Group for $770 million. GNC already announced last year that it planned to close anywhere from 800 to 1,200 of its 7,300 stores.

The boutique women’s apparel chain paid 50.20 percent of its rent for the past month. Francesca’s filed for Chapter 11 bankruptcy at the beginning of December and plans to close 97 of its stores. During the second quarter, the most recent period for which results are available, Francesca’s same-store sales fell by 5 percent. Its net sales were down 29 percent.

Movie theater chains were among retail tenants paying the smallest portion of their rents in November, with Cinepolis, a luxury movie theater operator headquartered in Mexico, paying 7.56 percent of its total rent due.

Regal Cinemas paid 1.68 percent of its November rent. Regal Cinemas’ parent, U.K.-based Cineworld Group, reported that for the first six months of the year, its theater admissions were down 65.1 percent and its revenue was down 66.9 percent. At the time of the filing, 200 of its movie theaters in the U.S. remained closed.

The discount furniture retailer reported a record same-store sales increase for the third quarter at 17.8 percent. The company responded to the pandemic environment by expanding its offerings of essential and “stay-at-home” product categories and building up its e-commerce capabilities, including a ship-from-store program. According to a published statement from Big Lots President and CEO Bruce Thorn, with these initiatives in place, “we believe we are well positioned to navigate through and beyond the current environment. Finally, this year's holiday season is certainly unique, and our strategic decision to plan for early holiday shopping has paid off. Although we expect business to moderate given the elongated season, we are pleased with the strong start we have made to the fourth quarter."

Although the discount department store chain filed for bankruptcy protection in September and plans to close all 13 of its stores and liquidate, it still paid 100 percent of its rent in November. In spite of the bankruptcy filing, the chain’s stores have been attracting healthy food traffic from shoppers looking for bargains, according to ABC’s Eyewitness News.

Like other non-essential retailers, the video game seller was negatively impacted by shutdown orders earlier in the year. But it has taken several successful measures to mitigate the impact from the pandemic. These measures included improving its fulfillment capabilities with curbside pick-up and same-day delivery, closing select stores to “de-densify” its bricks-and-mortar portfolio and reducing its inventory. As a result, in the second quarter, the most recent period for which numbers are available, GameStop reported an 800 percent increase in global e-commerce sales. It was also able to recapture 73 percent of sales made through its stores.

Fast-food restaurants, especially those whose locations include drive-throughs, have been outperforming the rest of the restaurant industry amidst the pandemic, and Kentucky Fried Chicken is no exception. A division of Yum! Brands, it reported a core operating profit of 4 percent in the third quarter of 2020, though its same-store sales declined by 2 percent.

The pizza chain launched a nationwide delivery service through DoorDash just in time for the arrival of COVID-19—in January 2020. In addition, pizza sales overall have gone through the roof during the pandemic, according to Restaurant Business.

In spite of a bankruptcy filing in August, apparel seller Men’s Wearhouse still managed to pay 100 percent of its rent for November. Men’s Wearhouse parent company Tailored Brands reported that in the first quarter its total net sales fell by 60.4 percent, driven largely by pandemic-associated store closures. Tailored Brands completed its financial restructuring at the start of December.

The restaurant chain has been doing well enough in 2020 that it’s been opening new restaurant locations amidst the pandemic. It operates throughout California and Arizona.

The wholesale club division of Walmart reported that its same-store sales rose by 11.1 percent in the third quarter, while its e-commerce sales increased by 41.0 percent. Sam’s Club membership income increased as well, by 10.4 percent.

In an environment in which essential retailers have been vastly outperforming the industry as a whole, the supermarket chain, a division of Wakefern Food Corp., continued to be a dominant grocery player in the Mid-Atlantic region, according to Food Trade News World.

The outdoor specialty retailer’s same-store sales went up by 40.9 percent during the third quarter of the year. According to company CEO Jon Barker, the increase was driven by customers buying more camping, fishing and hunting equipment, as well as by sales of firearms.

The grocery chain saw its same-store sales rise 9.1 percent in the second quarter, the most recent period for which results are available.

Fashion retailer The Buckle rounded up the list of chains that paid 100 percent of their rent in November. The company’s same-store sales increased by 8.4 percent during the month, after a 22.9 percent increase in September. 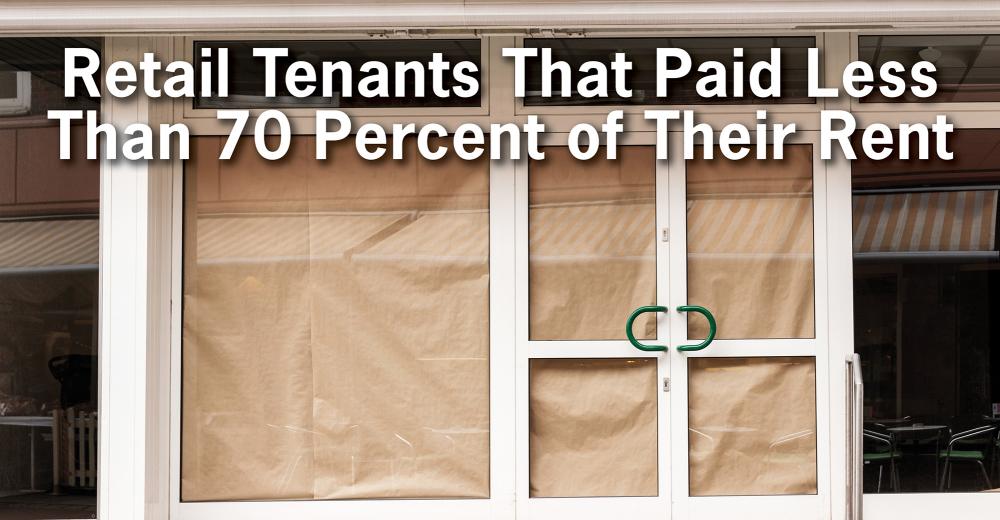 Next Up
UPDATED: COVID-19 Bankruptcies That Could Hurt the CRE Industry
Start Slideshow ›