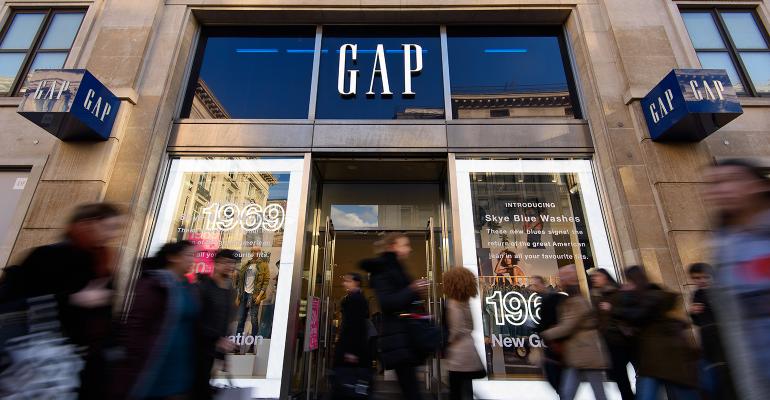 The company plans to close about 350 Gap and Banana Republic stores in North America by the end of 2023.

(Bloomberg Opinion)—Gap Inc. is getting real about real estate.

In an investor presentation Thursday, the apparel retailer outlined a three-year slimdown that suggests its leadership finally understands what a brick-and-mortar store portfolio should look like in the digital era. The company plans to shutter some 350 Gap and Banana Republic stores in North America, about 30% of its base, by the end of 2023. Once that’s done, executives expect 80% of revenue for those brands will come either from e-commerce or stores outside of malls.

For years, Gap has been too timid about trimming its store count, seemingly hesitant to dismantle an empire built for the 90s that no longer makes sense. While it doesn’t take strategic genius to figure out this was a necessary step, it’s a good sign that Sonia Syngal, who only became CEO in March, took the action in relatively short order.

At Old Navy, Gap’s largest chain, new brand leader Nancy Green said she is planning 30 to 40 store openings per year, a slowdown from the 75 annual openings the company said it was targeting last year. Old Navy already has about 1,200 locations. By comparison, off-price giants T.J. Maxx and Marshalls have about 1,300 and 1,100 U.S. stores, respectively. Unlike Old Navy, they don’t rely much on e-commerce, though. That’s a signal that Old Navy might be approaching a saturation point for brick-and-mortar outposts. The chain, at least, is being careful to expand in mostly small markets with populations of 200,000 people or less so as not to cannibalize existing stores. Pumping the brakes on openings is prudent, especially when the pandemic leaves so much uncertainty about long-term shopping patterns.

As for Athleta — the active-wear chain that it is counting on as a cornerstone of growth — Gap offered a target of 300 stores. That is a highly reasonable, perhaps even slightly conservative, target for a fast-growing concept that is in an in-demand corner of the apparel business. These moves, along with plans to stick to a regular-price model in Athleta instead of cranking up the promotion machine, gave me some confidence that executives are applying lessons from their more mature, challenged brands.

Scaling back its real estate footprint will Gap keep a lid on its fixed costs, an important component of its plan to return to profitable growth next year. That financial target, along with a plan to return to low- to mid-single-digit sales growth in 2022, sent its shares up more than 16% in afternoon trading. With the cash freed up from exiting stores, Gap should have a greater ability to invest in technology and supply-chain initiatives, essential if it is to succeed in its goals of drastically expanding its e-commerce business.

With this vision for store additions and closings, along with marketing and merchandising initiatives, Gap plans to derive 70% of sales from Old Navy and Athleta by 2023, up from 55% in 2019. Current trends toward casual and workout attire should be a tailwind in that effort. Still, Gap, by its own admission, has recently suffered from poor execution, often failing to have the right clothes in the right place at the right time. Its real estate choices, at least, help executives get “the right place” part under control.