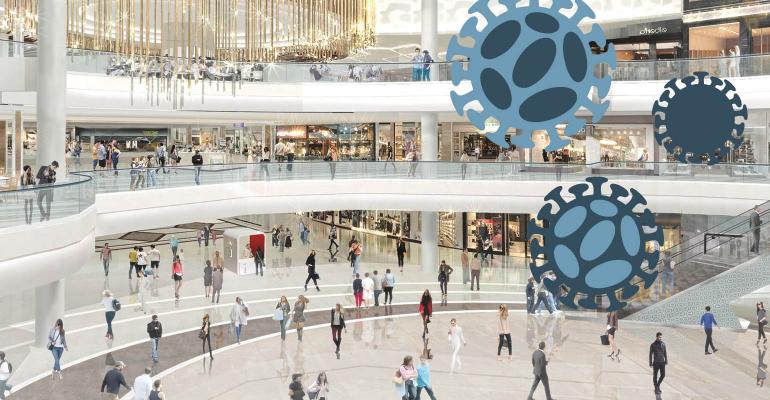 American Dream Mall’s Next Hurdle Is Opening During Coronavirus

The American Dream Mall’s long-awaited opening was set for March 19. Then coronavirus struck.

After two decades of false starts and setbacks, the grand opening of the New Jersey mall’s hundreds of retail stores, restaurants and DreamWorks water park is set to take place March 19.

But the ribbon cutting comes as the deadly coronavirus spreads through the U.S., causing New Jersey’s first fatality, and a growing number of Americans are avoiding crowded spaces.

The outbreak is the latest hurdle for the $5 billion complex next to MetLife Stadium in East Rutherford. These have included developers pulling out, a partially collapsed roof, funding shortfalls, delayed opening dates and the loss of two high-profile tenants to bankruptcy months before it was slated to debut.

On Tuesday, New Jersey announced its first death from coronavirus -- in the same county where the mall is located. Across the Hudson River in New Rochelle, New York, the National Guard is being sent to close large public gathering spaces in an effort to slow the spread of the outbreak. And the Centers for Disease Control and Prevention is warning at-risk populations to avoid crowds.

Still, American Dream is moving forward with its plan to open the water park and retail portion.

“It’s just bad timing,” Gabriella Santaniello, founder of retail consulting firm A Line Partners, said. “They are really in a predicament. There are just things beyond their control.”

In response to the outbreak, the complex has ramped up its safety procedures, adding more hand-sanitizing stations and putting up educational messages about preventative actions.

Spokesperson Dana McHugh said the company is reminding its thousands of employees to properly wash their hands, stay home if they are ill, cover their noses and mouths when coughing and sneezing and frequently clean work areas.

“Our safety philosophy focuses first on prevention, and that guides our existing protocols for cleaning and sanitizing public areas, as well as educating our team members, tenants and guests on safe, sanitary practices,” McHugh said in an emailed statement. She said the complex will monitor guidelines from the CDC and Prevention and will follow its lead.

The mall’s developer, Triple Five Group, cut the ribbon on the amusement park, indoor ski slope and ice rink late last year. Triple Five expects to eventually lure 40 million people to the mall each year, more than the developer’s massive West Edmonton Mall in Alberta, Canada, and on par with its Mall of America in Minnesota.

Doubling Down on Entertainment

American Dream was envisioned as a mall of the future that would entice both local residents and tourists to shop and play at the 3-million-square-foot center. It doubled down on interactive features as consumers migrated toward online shopping. Malls have been looking for new ways to draw people to their shops and convince them to linger around fashion boutiques and department stores. Yet the focus on adding entertainment like theme parks might actually be to American Dream’s detriment in the age of coronavirus, according to Santaniello.

“It’s kind of a breeding ground for a lot of everyone’s biggest nightmares,” Santaniello said. “When you’ve got a water park, you’re really close to people. It’s not like a regular mall where you’re touching a T-shirt that someone else touched at the Gap. This is lots of kids. There’s a water park. Good God.”

Even before the virus hit, American Dream was facing challenges. Bergen County, where it’s situated, doesn’t permit retailers to open on Sundays, shortening the weekend shopping window for customers. It’s the last county in America with that rule.

The mall was supposed to get a Barneys New York, the Manhattan department store that once represented a pinnacle of high fashion in the U.S., as an anchor tenant, occupying 50,000 square feet. That plan fell apart when Barneys went bankrupt last year.

Another key store, fast-fashion retailer Forever 21, also filed for bankruptcy last year and was bought by ABG and two of American Dream’s rival mall operators, Simon Property Group and Brookfield Property Partners. Now it won’t open in American Dream either, according to a person familiar.

Meanwhile stores across North America are struggling to attract shoppers now, with the number of visitors down for the fifth straight week. Foot traffic to retailers fell 9.1% in the first week of March, according to location-data provider Prodco Analytics.

Even if American Dream wanted to postpone its launch, it wouldn’t be easy since hundreds of tenants have committed to opening dates, Santaniello said. “The fact of the matter is, they’re going to open, and it’s probably going to open to not such great results.”

To contact the editors responsible for this story: Anne Cronin at [email protected]
Jonathan Roeder