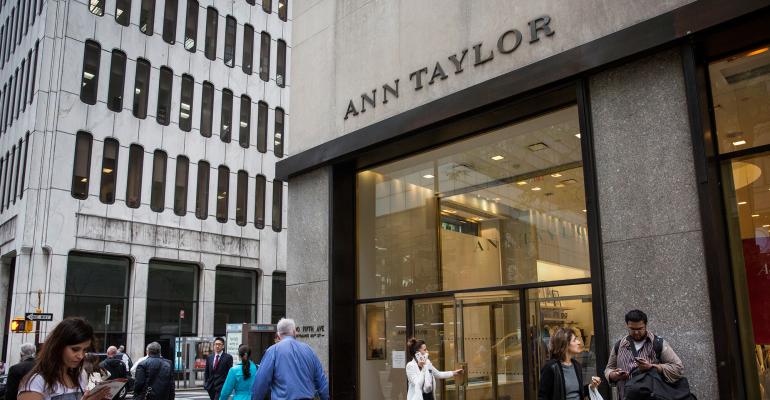 As part of its bankruptcy reorganization, Ascena Retail Group plans to close more than a half of its stores.

(Bloomberg)—Ascena Retail Group Inc., owner of the Ann Taylor and Lane Bryant clothing chains, will close more than half its stores and hand control to its lenders after the Covid-19 pandemic tipped the debt-laden retailer into bankruptcy.

The court filing on Thursday is the latest among U.S. retailers that have been pushed over the edge by shutdowns tied to the outbreak. The Chapter 11 action allows Ascena to avoid a permanent shutdown, cut its borrowings and close weak stores to minimize costs.

Ascena has about 40,000 employees, according to court papers, and some of them are bound to lose their jobs. The company plans to shut select locations in the U.S., all its stores in Canada, Puerto Rico and Mexico, and the entire Catherines chain. Ascena’s other brands include Loft, Justice and Lou & Grey stores.

Ultimately, Ascena expects to cut its 2,800 stores down to just 1,200, and current shareholders will be wiped out, according to court papers filed in U.S. Bankruptcy Court in the Eastern District of Virginia.

The company listed about $12.5 billion of liabilities, including $1.6 billion of funded debt. More than two-thirds of its secured term lenders support its restructuring plan, and they’ll wind up owning most of the new equity, Ascena said in a statement and court papers.

Almost $1 billion in debt will be erased, and Ascena will get $150 million in fresh funds from existing lenders.

Craig Johnson, president of Customer Growth Partners, said Ascena was weighed down by acquisitions it made from 2005 to 2015 that came as the women’s clothing market started to plateau.

“Even closing hundreds of stores was not enough to rebalance supply and demand -- ASNA was continually behind the curve,” Johnson said, referring to Ascena by its stock ticker. “To exit the thousands of leases it was burdened with after the decade-long buying binge, Chapter 11 was inevitable, only a matter of when, not whether.”

Ascena had been exploring rescue options for months, according to a court declaration by Carrie Teffner, Ascena’s interim executive chair person, but the company “ultimately determined that there were no financing or other out-of-court alternatives that provided a viable path forward.”

Court records show the new owners will include Bain Capital and Monarch Alternative Capital, which each get to appoint a director, while a consortium also including those firms, Eaton Vance Management and Lion Point Capital will choose another.

As for operations, the company will wind down the brick-and-mortar stores of Lou & Grey, which will operate within the Loft locations, and the Justice brand will be primarily online.

Ascena has already lined up a suitor for what will remain of Catherines, one of its plus-size brands. Australia’s City Chic Collective Ltd. agreed to be the lead bidder in an expected auction for the intellectual property and e-commerce business of Catherines. The sale is subject to court approval and higher bids could still emerge.

Retailers, many already struggling with competition from online shopping, have been among the hardest hit by Covid-19. Lockdowns drained revenue, helping to tip companies including J.C. Penney Co., J. Crew Group Inc. and Neiman Marcus Group Inc. into bankruptcy.

Chief Executive Officer Gary Muto temporarily shut Ascena’s stores in mid-March due to the outbreak. The Mahwah, New Jersey-based company has since re-opened 95% of them, Ascena said in its statement. But foot traffic remained lower than normal, with store sales falling between 30% and 80% in the last three weeks of May, according to a June lender presentation that was made public Thursday.

Management forecasts revenue will fall 21% in the financial year ending August, with more losses in the months ahead.

Even before the pandemic, Ascena was having financial troubles of its own making, with sales sliding and borrowings that ballooned to more than $1 billion. The retailer was trying to sell two of its chains amid mounting losses and signs that creditors were losing confidence in its prospects, Bloomberg reported.

Ascena shares fell 25% to 59 cents at 12:55 p.m. in New York. The stock had already plunged 90% this year through yesterday’s close. Its secured loans were quoted at about 37 cents on the dollar.

The case is Ascena Retail Group, 20-33113, U.S. Bankruptcy Court in the Eastern District of Virginia.

To contact the reporter on this story: Katherine Doherty in New York at [email protected]