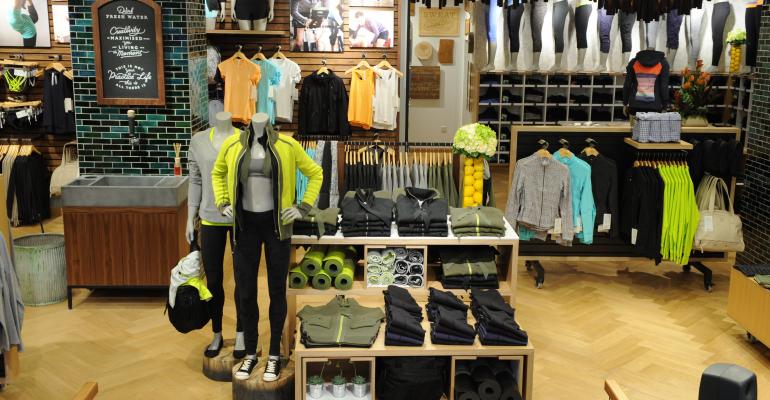 Lululemon and H&M are the latest chains to play with letting shoppers wear clothes before fully committing to buying them.

While the apparel sector overall has taken a hit in the past few years, some retailers aren’t taking it lying down and fighting back with new strategies.

It’s been rough sailing for retailers like Gap Inc., Canada Goose, Abercrombie & Fitch, American Eagle, Foot Locker, J. Crew and others that are reporting poor sales. Victoria’s Secret and Charlotte Russe are among companies shuttering stores. Dressbarn is closing all 650 locations. In fact, when looked at as a group, apparel retail earnings fell 24 percent in the first quarter of 2019. Up until now, the group had been growing earnings since the third quarter of 2017.

Apparel retail earnings haven’t sunk this low since the Great Recession, when they dropped 40 percent in the first quarter of 2008, according to CNBC. Many apparel retailers are located in regional malls, and they blamed sluggish mall traffic, the weather and unsuccessful promotions for the dismal first quarter.

“At the end of the day, clothing is a need. Everyone’s going to keep on buying it,” says Ricardo Rubi, retail marketing specialist and partner at New York consulting firm Simon-Kucher & Partners. “And it’s not like we’re in a time when budgets are constrained, looking at the economy right now. I think what’s happening is basically what everyone knew was going to happen one day or another. People are using more and more e-commerce to buy their clothes.”

Not all retailers are struggling. Target and Walmart, which are both investing in apparel offerings and succeeding at omni-channel retailing, posted solid first-quarter earnings.

In fact, Lululemon Athletica Inc.’s stock is soaring. On July 23, the company’s stock price increased to $189.07 per share, and the retailer is expanding.

The chain, which has led the athleisure fashion movement, opened its biggest-ever, 20,000 sq.-ft. experiential store this month in Chicago’s Lincoln Park neighborhood. The two-level store boasts yoga/fitness studios, a meditation area, a full locker room and a café called Fuel. The retailer is also adding skincare and athletic shoes to its line of workout gear.

Lululemon is working to offer shoppers experiences that they can’t get online, meaning that the store becomes more than just a place to do transactions.

Shoppers can sweat in gear before purchasing it

Lululemon is offering a new perk at the flagship store, which allows customers to take a workout class in the gear that they’re considering buying so they can test it out first. The pilot program is free of charge for select Lululemon merchandise.

The move will likely help increase sales, particularly sales of higher-priced items as consumers move away from fast fashion and are increasingly looking to purchase better quality—often more expensive—items that will last longer, according to Taylor.

“It makes sense that consumers would want to try before they buy and confirm whether it is the right purchase for them,” Taylor notes.

Brands like eyeglass company Warby Parker pioneered this approach in offering customers the opportunity to try five frames at home before committing to a purchase online, Taylor says. Further, the growth of Rent the Runway demonstrates that consumers are less interested in purchasing items that could potentially be for single use.

“This kind of strategy also encourages consumers to try lesser-known brands as it reduces the risk of them being disappointed with their purchase,” Taylor says.

However, he also points out that this strategy requires that consumers be already interested in purchasing the products from the brand in the first place.

If Lululemon’s new experiential model works, company executives said that by 2023, roughly 10 percent of its stores could replicate the Chicago experiential store. The flagship still offers traditional retail with women’s merchandise on the first floor and men’s products on the second floor.

Experiential is a smart move

Lululemon’s new store is right on trend, providing an exceptional brand experience that gives consumers a broad range of reasons to visit the store, Taylor notes.

“It also provides a great testing ground should Lululemon want to broaden their offering into new categories,” he adds.

This is a great example of experiential retail, Rubi agrees. “I think most of these retailers are scratching their heads in order to be able to understand what can they do different that Amazon cannot give shoppers,” he says.

“At the end of the day, it’s going to be the guys that have a higher margin that can help fund some of these different activities that are going to be the most creative.”

But even then, it doesn’t necessarily mean that that these new retail initiatives are going to completely change the way people will shop. “It’s going to be around the entire experience that they’re offering,” Rubi notes.

H&M is the latest retailer to launch a buy-now, pay-later payment program that it hopes will persuade customers to spend more money at its stores. The program starts this fall in the United States.

Consumers will be able to keep an item for 30 days before deciding if they want to keep it long term. Then they can choose to split payments into four interest-free installments over two months. There are no fees to use the service. H&M joins Urban Outfitters and Abercrombie & Fitch, which launched similar programs.

Retail experts say it could be a way to attract younger shoppers who have less buying power.

“Buy now pay later” can help increase revenue as it reduces the barrier to purchase for consumers, allowing them to pay in interest-free installments, according to Taylor. It can also drive conversion and reduce the need for discount sales, he adds. “Improved sales figures reduce inventory, and therefore, the need to discount, which improves gross margin,” he notes.

However, it’s not all rosy.

“It’s unlikely to increase the share of wallet spent on apparel in the longer term. In fact, paying installments will reduce buyer power in the longer term. For example, paying off over multiple months means that you have less to spend on clothes the following month.”

Rubi describes the buy-now-pay-later concept as a “good try.”

“Its’ kind of like, ‘Hey, let’s see if it actually works,’” he says. “I don’t expect that any of these initiatives are going to have an immediate impact, but it’s going to be quite important that retailers start chasing their brand identity moving forward. A lot of these guys are trying to corner that consumer that’s really looking for the different experience.”

Apparel retailers are looking to the brand next door to see what it’s doing and whether it’s working, according to Rubi. “And if there’s a little bit of success, it’s then ‘Okay. How can we take that to the next level?’ Retail is just completely reinventing itself.”