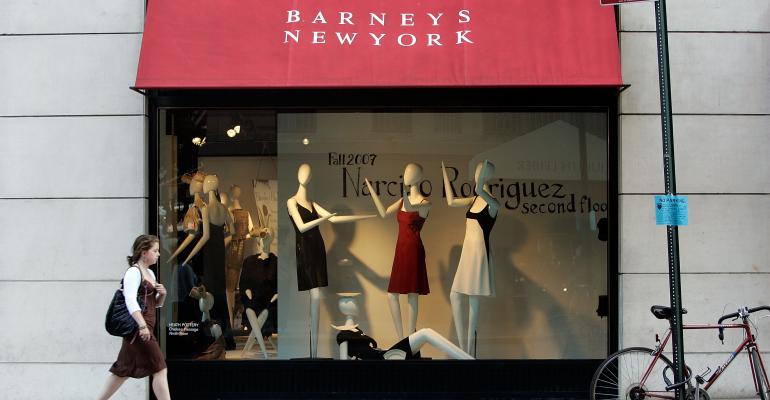 Barney’s claims to have a clear vision of what it wants to look like post-restructuring.

(Bloomberg)—Barneys New York Inc., the upscale clothing retailer that filed for bankruptcy earlier this month, says it has a “clear, crystallized vision” for what it will look like post-restructuring. The challenge, an executive says, is pulling it off.

“We have a very tight timeline to come out of this chapter,” said Katherine Bahamonde Monasebian, chief digital and technology officer at the department store. “Our intention that we’re setting is to come out of this with a very strong digitally focused partner and emerge on the other side and really be able to -- with a healthier balance sheet and operating structure -- implement the vision of the company.”

That vision includes a more intentional push into food, entertainment and experiences, Monasebian said in an on-stage interview with Bloomberg News at the eTail East conference in Boston. It also means “becoming more operationally efficient, service oriented and shifting from a product culture to a people culture, which involves a retooling from the top of the organization to the bottom. For those that are part of large legacy corporations, it’s easier said” than done, she said.

“We’ve got a very committed leadership team who is completely committed to decisive action to really radically transform. But the actual execution piece is a big challenge,” she added. “How do you move without alienating your core customer?”

Barneys, which recently laid out plans to shutter most of its stores after getting squeezed by rising rents and fewer visitors, seeks to sell a slimmed-down business and negotiate with its landlords. Barneys said when it filed that it had secured $218 million in financing and will continue to operate until it finds a buyer.

One of the locations it will keep open is its Madison Avenue flagship, which Monasebian said has “a very loyal and devoted following.” That store debuted in 1993 and was the city’s largest store opening since the Great Depression. Celebrity fans would talk up the store’s glitz and glam, attracting shoppers over the years from Britney Spears and Kim Kardashian to Sarah Jessica Parker.

“The flagship is actually the DNA of the brand that New Yorkers know. It’s a New York institution,” she said. “It actually is a profitable -- despite the rent increase -- and productive store for us.”

--With assistance from Jordyn Holman and Katherine Doherty.

To contact the reporter on this story: Kim Bhasin in New York at [email protected].