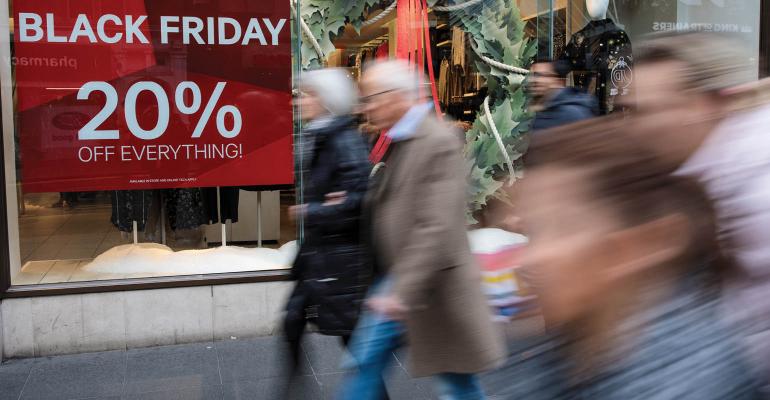 People still shop at physical stores on Black Friday, but it’s a far cry from the frenzy that once spawned stampedes.

(Bloomberg)—Becky Strickland really wanted her teenage daughter to experience the madness of Black Friday, so she brought her to Manhattan’s Herald Square -- typically one of New York’s busiest shopping districts.

But stores failed to produce the hectic scene she expected to encounter, even though discounts -- like sweaters marked down 60% to $14.99 at J.C. Penney Co. -- remained abundant.

“The thrill of the hunt is gone,” said Strickland, a 50-year-old teacher visiting from Rock Hill, South Carolina.

Many Americans are having the same feeling. Thanks to online shopping and deep discounting that started weeks ago, the day after America’s Thanksgiving should probably be rebranded Blasé Friday. Yes, people still shop at physical stores on this day, but it’s a far cry from the frenzy that once spawned human stampedes, anxiety and carnival-like atmospheres inside shopping malls.

“It’s a calmer Black Friday,” said Oliver Chen, an analyst at Cowen & Co. Consumers are doing more shopping earlier in the month, but the day remains “a big part of the American psyche,” he said.

Analysts reported softness in visits to stores -- partly hurt by wintry weather in the Midwest and Western regions of the U.S. JLL, a commercial real estate firm, said 40% of stores had fewer visits this year. Meanwhile, e-commerce produced another year of robust growth. Salesforce, a digital services provider, projects that e-commerce spending will reach $7.4 billion in the U.S. on Black Friday -- 16% higher than a year earlier. A fuller picture of how this weekend went won’t be known until retail chains report quarterly results next year.

“This is a more civilized holiday than in the past,” said Jill Standish, senior managing director and head of Accenture Plc’s global retail practice. “I don’t see the gangbuster, knock-’em-down, get-in-early rush that I saw in previous years.”

In Chicago, 30-year-old Mandy Hines epitomized the way more and more Americans experience Black Friday. She picked up a few gifts, including unicorn straws and coffee cups, at a Marshalls location with a half-full parking lot. But she considered the event more of a tradition than a necessity, and planned to do the bulk of her holiday shopping online.

“You’re seeing a generational shift with the approach to Black Friday,” said Bloomberg Intelligence analyst Jennifer Bartashus. Twenty- and 30-somethings are more surgical, using the event to buy just a couple of items that they’ve already researched online. That contrasts with how older generations had done more browsing and stocking up, she said.

Black Friday also continues to show the increasing divide among legacy retailers. With so much competition from the likes of Amazon.com Inc. and direct-to-consumer digital brands, the growing U.S. economy and rising wages aren’t benefiting everyone.

“The mere existence of very positive macroeconomic conditions does not in and of itself guarantee that every company in every category is going to perform better than average,” Matthew Shay, president and chief executive officer of the National Retail Federation, said in a phone interview. “There are still winners and losers.”

What a fading Black Friday means for the industry remains to be seen. In recent years, sales growth for the holiday season spanning November to December remained strong. Retailers made up for a sluggish Black Friday with more purchases earlier and later, and shoppers now expect discounts throughout the season. In their rush to one-up each other, chains might have killed off Black Friday as it was once known, but that’s not necessarily a bad thing.

Take Tom and Denise Doyle. They aren’t perennial Black Friday shoppers, but were lured to a recently remodeled Target location in White Plains, New York, after their 16-year-old daughter agreed to watch their younger kids. The store wasn’t too crowded, and Tom checked items off an old-fashioned paper shopping list: a remote-control car, Legos and video games.

The couple will also shop online -- they’re planning to buy a Chromebook on Monday -- but viewed this trip as a getaway of sorts.

“We snuck out,” Denise said. “We never get to do anything together, so this is a date.”