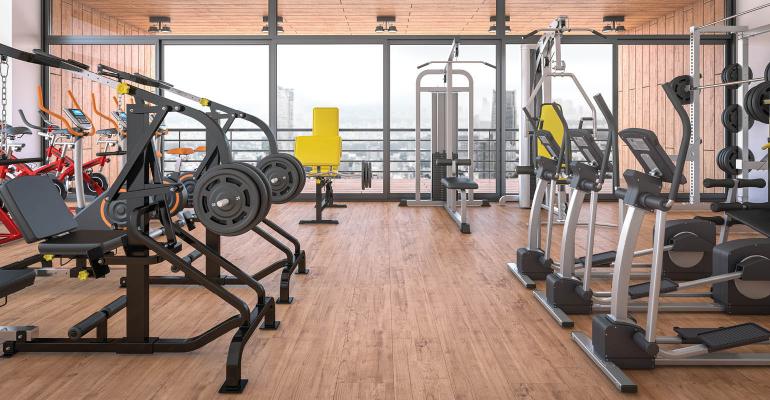 There are already signs of a few ‘cracks’ in the highly competitive, high-end boutique sector.

More than 71.5 million consumers used health clubs in 2018, which hit an all-time high, according to the International Health, Racquet & Sportsclub Association (IHRSA). The number of individual members totaled 62.5 million, up 2.6 percent over 2017.

The boutique fitness sector, in particular, has been thriving, including cross-fit, indoor cycling, rowing, yoga, and boxing studios. Boutique brands are often located in lifestyle centers and urban cores, and fitness enthusiasts have been clamoring to take these high-end classes despite the premium prices—typically $20 to $40 per class.

In fact, between 2012 and 2015, membership at traditional, big-box gyms increased by 5 percent, while membership at boutique studios jumped by 70 percent, IHRSA reported.

Boutique fitness centers’ footprint on a square footage basis has doubled since 2013 and quadrupled since 2008, according to research firm CoStar Group.

Hot concepts include Orangetheory Fitness, which opened its 1,000th location in 2018 and continues to open 250 to 300 new studios per year. ClubPilates has 588 current studios and more than 650 slated to open by the end of 2019. CycleBar has 200-plus indoor cycling studios, with hundreds more slated to open in 2019 and beyond.

What’s been the big draw?

Experts say boutique brands offer consumers an experience and social interaction and are more than simply places to work out. That social, group fitness trend has caught on. Twenty-seven percent of the U.S. population—or 54.3 million adults—participate in a group fitness class at least once per week, according to the MINDBODY Wellness Trends report.

“Research has shown that millennials are spending money on experiences and travel rather than material things or car/homeownership,” says Kristen Geil, editor-in-chief of ASweatLife, a wellness digital media and technology company.

Seventy-four percent of Americans value experiences over products and things, according to a study by Expedia and the Center for Generational Kinetics.

“These boutique fitness brands are all experts at making a workout more than just a chore on your to-do list,” Geil notes. “They know how to make it an experience that consumers want to take part in and share with their friends. You go to SoulCycle for a workout, yes, but you also go for the candlelit room, the instructor you follow on Instagram, and to share your yearly ‘birthday ride’ with friends. I think by creating a full experience, from booking your class to engaging with the brand on social media, specialty fitness studios are building loyal followings.”

They’re all trying to provide an experience for people that they feel is worth the extra value—that premium price, adds David Downing, managing director of leasing and retail strategy at Boston-based Graffito SP. The company specializes in ground-floor leasing of urban projects.

But what happens if a recession hits?

Some economic bellwethers suggest that a downturn is looming, and Geil thinks that boutique fitness brands would be impacted the most, due to their hefty prices. Plus, there are so many boutique fitness options and consumers can be fickle about wanting to try the newest workout fad.

“There are new concepts that come along and get people excited and then they get tired and stale just like anything else,” Downing notes. “So, a lot of these [boutique] guys have to be thinking about what’s next.”

Boutique fitness now looks like it might be “on the edge of a bubble,” according to Geil.

Brands like Orangetheory Fitness, Pure Barre and others are franchising—some even internationally—and consumers have more choices than ever when it comes to where they can work out.

The boutique boom has been taking place, in large part, in major metropolitan cities including Los Angeles, Chicago and New York, where real estate is at a premium, Geil notes. If the studios aren't filling classes or selling memberships, they might not be able to afford their leases.

“I think that fact makes it probable that a recession could impact boutique fitness,” she says. “As consumers are impacted by a recession, they will still spend on fitness, but their behaviors may change slightly to accommodate for lower disposable income.”

Will big-box gyms feel the pinch?

Geil believes that the bigger gyms—both upscale and inexpensive brands—are positioned pretty well for a recession. Many have been backfilling spaces in malls across the country.

Luxury gyms like Equinox have the advantage of "one-stop wellness," where they can offer members more than just fitness classes and gym equipment, she notes. They can also offer a spa, a co-working space, a cafe, a convenience store, physical therapy, and more.

“Members would lose a lot by cutting those all-inclusive benefits from their budget, and in fact, they might look to utilize those amenities more during a recession to bring their cost-per-use down,” Geil notes.

ASweatLife had a discussion with David Weston about high-volume, low-priced gyms like Crunch Fitness or Planet Fitness. Weston is principal at North Castle Partners, a private equity firm focused on investments in consumer and healthcare businesses. Weston pointed out that boutique studio clients might "trade down" to these cheaper alternatives during a recession.

“I’m inclined to agree, especially if consumers combine digital fitness programs with cheaper gym memberships to still get a variety of workouts within the same multi-use space,” Geil says.

Impact of digital fitness and streaming

Workout classes can now be streamed live to people’s living rooms. Examples include Peloton, the Mirror, Daily Burn, Gaia, Fitness Blender and Beachbody on Demand. Instructor-led studio classes mean people can work out anytime and anywhere. These high-tech home fitness products are putting pressure on the boutique sector by adding even more competition.

Peloton is seeking to raise as much as  $1.16 billion in its IPO. The fitness company sells stationary bikes and treadmills, and users pay $39 a month to stream Peloton’s classes.

“You have to look at where fitness it heading,” Downing notes.

For example, spinning continues to be big, but the “challenge for a lot of these guys is Peloton introduced getting a similar experience at home and that has really hurt that segment,” he says.

There has already been some fallout. Indoor cycling studio Flywheel Sports Inc. is closing 11 of its 42 locations. “We decided to take a look at our national footprint and close studios that were under-performing,” a spokesperson told Bloomberg.

Also, SoulCycle pulled its plans for an IPO due to “market conditions.”

“A lot of those guys in the [indoor cycle] space are starting to diversify their class offerings around strength and training or yoga, or add different elements to make it relevant and give more choices and offerings,” he notes.

Downing believes the major risk for developers and landlords is whether a boutique concept is going to still have legs five or 10 years from now. “A lot of these deals end up being long-term deals,” he notes. “I think that becomes more of an inherent risk than heading into a recession.”

And build-out of the space isn’t cheap, he adds.

“It’s expensive and it‘s definitely shifting toward landlords having to put in more capital than previously to get the best operators, for sure.”