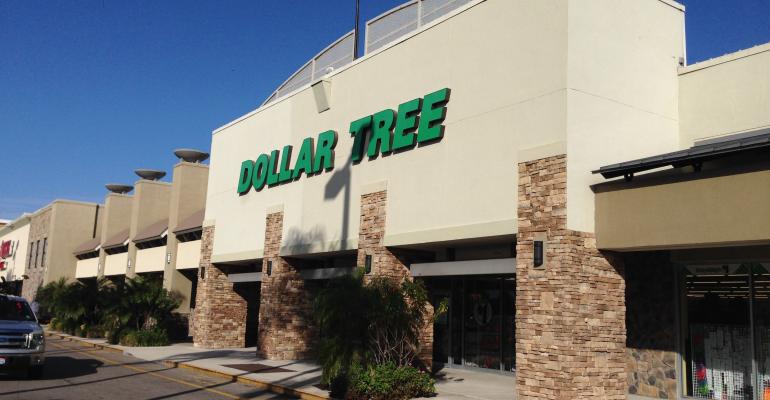 Dollar Tree Dives Most Since 2012 as Tariffs Erode Outlook

The discount retailer trimmed its outlook on this year’s profit due to tariffs on Chinese imports.

(Bloomberg)—Dollar Tree Inc. shares fell the most intraday since 2012 after the budget retailer trimmed its outlook on 2019 profit, saying tariffs on Chinese imports are driving up costs.

The company now projects full-year earnings per share of $4.66 to $4.76, down from its previous range of $4.90 to $5.11. While tariffs drove the forecast reduction, Dollar Tree also cited higher wages in its distribution centers, a global helium shortage and more sales of lower-margin items, among other issues.

The company’s shares fell as much as 17% to $93.25. The decline wipes out a big portion of the company’s 24% gain so far this year through Monday’s close.

Dollar Tree’s downward revision shows the risk that the ongoing U.S.-China trade war poses for retailers -- especially value-based chains that target lower-income consumers. The company has been carrying a new multi-price strategy instead of simply charging $1 for all of its goods and is renovating stores it operates under the Family Dollar brand.

“They’ve done a very good job thus far of absorbing some of that impact from tariffs, but as tariffs continue to pile up, they’ll probably have to push through some price increases,” said Jennifer Bartashus, a senior analyst at Bloomberg Intelligence.

Dollar Tree’s same-store sales, a closely watched retail metric, were largely in line with expectations, including for its Family Dollar brand. However, positive comparable-store sales there were “cold comfort to us, given the fact the division’s gross and operating margins declined significantly,” Loop Capital analyst Anthony Chukumba wrote in a research note.

Company-wide gross margin of 29.7% -- down from 30.2% a year earlier -- was due to higher freight and distribution costs and a rise in the sales of less profitable consumable items, primarily at Family Dollar, the company said.

Family Dollar, which was acquired for almost $9 billion by Dollar Tree in 2015, has been an ongoing point of contention for shareholders. Activist investor Starboard Value built up a stake in Dollar Tree in 2018 and urged the company to offload the Family Dollar business, but recently sold its shares.

With Starboard’s exit, Dollar Tree management “no longer has anyone willing to hold them accountable,” Chukumba said.

Dollar Tree Chief Executive Officer Gary Philbin said the addition of frozen food areas to Family Dollar hurt margins. The renovation program, which has been carried out already at about 1,000 locations and will be expanded to the same number next year, has the potential to improve profitability going forward, he said.

He said that Dollar Tree is also working to move production of some of its merchandise out of China while pushing some vendors to lower costs. The company is also working to offset a helium shortage, which has crimped sales of balloons, with other party items.

The dimmer profit forecast contrasts with rival Dollar General Corp., which earlier this year raised its earnings per share outlook for the full year. Dollar Tree’s results also affected Dollar General on Tuesday, however, pulling its shares down as much as 2.8%, the most intraday in more than two months.

--With assistance from Janet Freund.

To contact the reporters on this story: Jonathan Roeder in Chicago at [email protected];