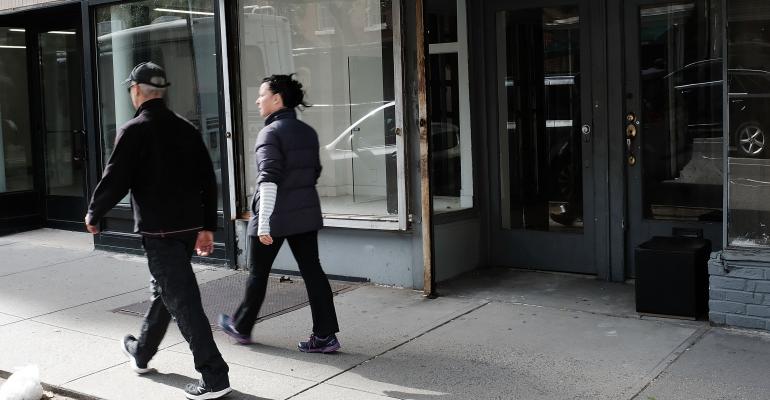 Vacancy for mom-and-pop stores ranges from 5 percent to 20 percent, depending on the neighborhood.

(Bloomberg)—In New York City, big businesses like Amazon and Google are adding space. It’s the small ones local politicians are worried about, with vacant storefronts taking up as much as 20% of some retail areas of Manhattan and Brooklyn.The City Council passed a law last month requiring landlords to register the status of their retail space, with updates when businesses come and go. The council said it enacted the law after having seen “a slew of beloved local establishments across the city closed amid skyrocketing costs.”

“We see property owners waiting on their vacant spaces to see how much they can get,” said Shrima Pandey, small business program manager for Chhaya Community Development Corp., which works with South Asians in the Queens borough.

Beyond a neighborhood’s need for lively street life, a retail downturn could reverse a decade’s economic gains. The industry is one of the city’s major employment generators, particularly for immigrants, accounting for 357,000 jobs, increasing more than 2% in the 12 months ending in June, according to the state Labor Department. Restaurants and bars had the most growth, followed by clothing stores, according to brokerage company Cushman & Wakefield.

“The city’s retail universe isn’t shrinking. It’s expanding into new neighborhoods in Brooklyn and Queens with retail corridors that didn’t exist 10 years ago,” said Jamie McShane, spokesman for the Real Estate Board of New York. “Yes there are changes -- part of a national phenomenon that has brought dislocation as people’s tastes and habits change.”

Just last week, a city Planning Department report questioned whether the closing of mom-and-pop stores is as widespread as council members fear. It found a 5% vacancy rate in Pandey’s Jackson Heights, Queens, the lowest of 24 neighborhoods studied. Still, it found vacancy rates as high as 20% on Manhattan’s West 14th Street and in Brooklyn’s Bedford-Stuyvesant.

“Although the study did identify neighborhoods challenged by high vacancy rates, this condition was not universal,” the planning department said in the report. “Vacancy is concentrated only in certain neighborhoods and is influence by local and citywide market forces and spending patterns.”

Manhattan Borough President Gale Brewer said the storefront-database law will “provide us with a greater understanding of how and where vacancies change year over year, and a method to track the effectiveness of any government assistance programs or policy changes aimed towards solving this issue.”

Councilwoman Helen Rosenthal, who sponsored the bill, said her office conducted a 2017 survey of the Upper West Side and found a 14% vacancy rate on Broadway and Amsterdam Avenue, close to the planning department’s estimate.

City Council researchers reported that average Manhattan rents rose 44%, to $156 per square foot, between 2006 and 2016. In Brooklyn, retail rents averaged at least $100 per square foot in 15 neighborhoods as of 2017, up from three in 2007, according to CPEX, a commercial real estate company.

“Landlords still have to pay for maintenance, property tax, the mortgage,” Soutendijk said. “There’s almost no reason why any owner would want a space without income.”Yet at 94th Street and Broadway on Manhattan’s Upper West Side, 4,000 square feet have gone unrented since its last tenant, Blockbuster Video, went bankrupt in 2010. Doug Kleiman of RIPCO Real Estate, which handles the property, declined to discuss it.

Meanwhile, at Sweetgreen, a fast-food salad chain, a steady stream of customers lined up at the counter. On the other side of Broadway at Gotham Wine and Liquors, longtime manager Charles Serra said business, too, has been good in his 30 years at the shop. The key to retail success, he said, is to “offer customers what they want at a price they can afford.”

A few blocks south, at West Side Judaica, a seller of books and religious articles since 1934, there’s a store-wide clearance sale, as it’s challenged by what a local news Website reported was $24,000-a-month rent. A large window sign proclaims, “Everything Must Go!”

To contact the reporter on this story: Henry Goldman in New York at [email protected].