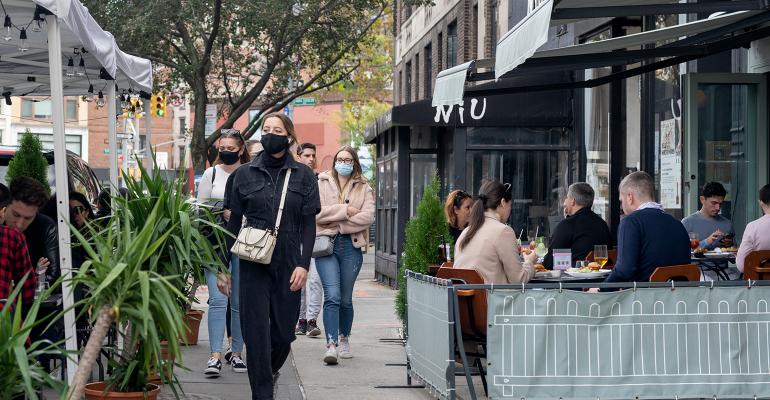 That might still not be enough to save many smaller operators.

A recent survey by the NYC Hospitality Alliance helps illustrate the dire straits of America’s restaurants.

The survey found that 87 percent of New York City’s restaurants, bars and nightlife venues couldn’t pay their full rent in August. The culprit, of course, is pandemic restrictions imposed on these businesses.

Further complicating the situation, 60 percent of the businesses surveyed said their landlords hadn’t waived any of their rent in response to the coronavirus pandemic. But in New York City and across the country, a number of landlords are offering concessions for restaurants and other hospitality businesses in the form of percentage-only rent.

Some restaurant landlords are temporarily switching from fixed-rate rents to rents based only on a share of the tenant’s gross sales or revenue, in an effort to help these businesses survive, says Ken Lamy, founder, president and CEO of The Lamy Group, a Mandeville, La.-based financial management consulting firm. Landlords are then leaving the door open to revisiting the rent structure at a later date, perhaps 12 to 18 months down the road, he notes.

“Rent is a function of revenue, and with restaurant revenue getting decimated in certain types of trade areas, one way to protect the financial stability of a restaurant—and provide a cushion before we recover from COVID-19—is to structure a percentage-only rent deal and fix the restaurant’s rental expense with an acceptable percentage of gross sales,” says Jason Kastner, managing director of the national advisory group at Washington, D.C.-based Dochter & Alexander Retail Advisors, which represents restaurant and retail tenants.

Percentage-only rents are especially helpful in an industry with notoriously thin profit margins of around 3 percent to 6 percent and, now, with slumping sales. In September, sales at U.S. eating and drinking establishments totaled $55.6 billion, compared with the pre-pandemic tally of $65.4 billion in February, according to the National Restaurant Association, an industry trade group.

The percentage applied to a restaurant’s rent in a pandemic-era agreement typically ranges from 5 percent to 15 percent, according to Lamy. The figure sometimes includes common-area expenses like property taxes and insurance, but sometimes excludes them, he says. In some cases, the percentage-only rents come on the heels of rent deferrals that went into effect earlier in the pandemic.

Not every restaurant can take advantage of percentage-only rent, though. For instance, some landlords are limiting percentage-only deals to tenants that operate multiple restaurants rather than just a single “mom- and-pop” location.

At the other end of the spectrum, some landlords are being quite generous. For instance, San Francisco-based Presidio Bay Ventures, a commercial real estate investor and developer, has let Merkado, a Mexican restaurant and open-air market in San Francisco’s SOMA neighborhood, operate rent-free since March.

A prime example of the percentage-only approach to rent is New York City’s Grand Central Terminal. The Metropolitan Transportation Authority, which operates the terminals, has proposed percentage-only rents for restaurants at the famed train station that are run by small businesses. The percentage, to be based on gross revenue, hasn’t been revealed. The rents would likely return to fixed rates once business reaches pre-pandemic levels.

“A store that’s empty is not a good situation anytime. It’s even more damaging to the landlord today,” Lamy says. “So, is it better to have some dollars flowing with a store that’s open? Or would you rather have an empty store because you think you can re-lease it at a better rent? But when is that going to happen?”

Some restaurant landlords might even benefit from percentage-only rent if a tenant’s sales numbers happen to rise above the average, says Allan Perales, chief operating officer of Chicago-based Gold Street Partners, which represents commercial real estate landlords and tenants. Still, the most important consideration for a landlord agreeing to percentage-only rent is to simply keep a restaurant space occupied, Perales says.

The National Restaurant Association reports that in the first six months after pandemic shutdowns took effect, nearly 100,000 restaurants closed either permanently or for a long-term period. Thousands more could be on the chopping block.

For the percentage-only rent structure to work from the landlord’s perspective, a restaurant must supply up-to-date sales and revenue data, according to Lamy. This puts landlords in a “trust but verify” position, he says.

“What’s your average sale today? What was it pre-pandemic? Those metrics are critical to understanding what was happening before, what is happening now and what has happened during this time,” he notes.

“For already open and operating restaurants, given the enormous impact to sales because of COVID-19, we will continue to see what feels like daily announcements of permanent closures,” he says.