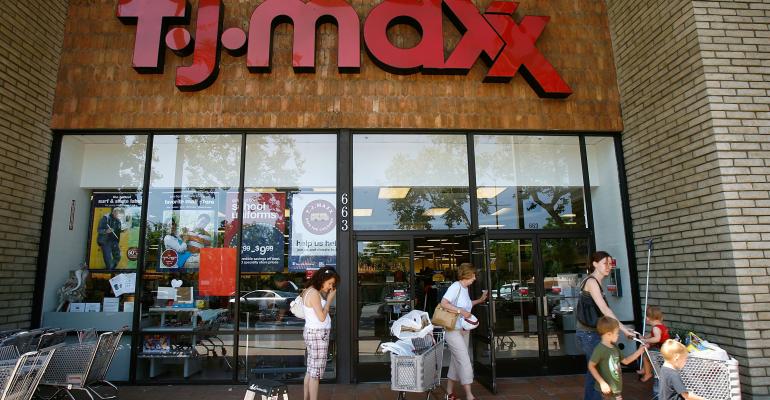 How Long Can Off-Price Retailers Continue to Outperform?

The time horizon might be as long as five to seven years, according to one industry source.

The U.S. off-price retail sector remains a bright spot in the turbulent retail environment plagued with bankruptcies and store closings.

Off-price chains continue to buck the trend that’s negatively impacting many flailing bricks-and-mortar retailers. They boast rising same-store sales and growing physical footprints, and many are even looking to grow online. While department stores are suffering from waning foot traffic and reduced store counts, off-price retail is thriving.

The basic idea behind the off-price retail model is to provide over-produced items at a discounted price, which means scale of the company can play a significant role and make it easier to compete and operate with lower costs, Hudgins notes.

“Off-price is the shining star of the physical retail industry right now, and it looks like it’s set to continue for the next five to seven years in terms of new store openings and consumers shifting to it,” says Michael Brown, a partner in the consumer practice of global strategy and management consultant Kearney (previously A.T. Kearney).

The sector remains strong and there’s no indication that will change over the midterm and probably the long term, agrees Ray Hartjen, director of marketing at RetailNext, which measures store traffic.

“Off-price has a very compelling message for consumers,” Hartjen notes, adding that it’s a different message from the past. Today, discounted merchandise becomes available even before the weather changes.

The three largest off-price chains are TJX Cos. (parent company of TJ Maxx, Marshalls and HomeGoods), Burlington and Ross Stores, all of which are reporting robust sales and aggressive store expansions.

Same-store sales for all three companies surpassed analysts’ expectations in recent quarters as more consumers sought value and the “thrill of the hunt.”

Framingham, Mass.-based TJX Cos. opened 107 stores in fiscal third quarter 2020, taking the total to 4,519. Further, the retailer is continuing to expand its fleet with plans to be at roughly 6,100 stores long term.

“TJ Maxx has been teaching retailers how to do retail for the better part of a decade now,” Hartjen notes.

Burlington, based in Burlington, N.J., reported same-stores sales increased by 2.7 percent in the third quarter of 2019, which ended Nov. 2. That’s on top of last year’s 4.4 –percent increase. This was the 27th consecutive quarter of same-store sales growth for the retailer. The company announced it would open 50 new stores in 2019 and now operates 726 stores.

Dublin, Calif.-based Ross Stores reported same-store sales were up 5.0 percent in the quarter ending Nov. 2, easily beating analysts’ expectations and on top of last year’s increase of 3 percent. The retailer added 98 stores to its bricks-and-mortar footprint in 2019 and now has 1,550 locations.

Consumers continue to be “trained” to seek deals, according to the NPD Group, a global industry analysis and advisory services company. Apparel sales at off-price retailers increased by 3.0 percent, while total apparel sales fell by 3.0 percent in the 12 months ending in November 2019, NPD reported.

Discounter sellers have replaced the off-price department store because they have mastered the art of the “treasure hunt,” says David Weiss, a partner at Chicago-based consulting firm McMillan Doolittle.

“Customers are surprised by what they find, they like the deal, and they are interested in coming back to see what is new,” Weis points out. “Doorbusters used to have that appeal, but merchandise at the department store is boring, predictable and available at potentially a lower price when [a consumer] finds an item at the off-price retailer.”

There’s also the location factor, according to Weiss. “Off-price stores are in centers and strip malls with easy access, near grocery and other high-frequency transactions, and the retailer is the top-of-mind destination for a great surprising ‘steal,’” he says.

Meanwhile, Moody’s expects another dismal year for department stores in 2020. Moody’s said operating income is projected to be down about 20 percent for 2019 and about 5 percent in 2020.

“Department stores are kind of stuck in a business model from 1980 for the most part,” Hartjen says. “They’re pre-Internet and a have a lot of space and a lot of locations, and it’s just not necessarily the way that consumers shop today.

“They need smaller footprints and they learned the hard way over the last five or 10 years,” Hartjen adds.

Several department stores have launched their own off-price concepts to compete in the off-price market, Hudgins notes. These include Macy's Backstage, Bloomingdale’s The Outlet, Nordstrom Rack, Saks Off 5th and Neiman Marcus’ Last Call.

In Macy's three-year revitalization plan released in early February, the retailer said off-price offerings were one of the better-performing segments of the company, and Macy's plans to expand this segment in 2020. The company plans to roll out an additional 50 Backstage stores this year.

What challenges does off-price face?

With so many stores opening, at some point retail experts say there could be some oversaturation in the sector.

In addition, the decline of the department stores could bring new challenges when it comes to the supply side. “The only concern that I can see as off-price grows and grows and grows is when does the supply of merchandise that somebody made a mistake when they initially ordered it run out?” Brown asks.

“They rely on others’ mistakes,” he notes.

When other retailers either no longer exist because off-price operators have taken all of their customers or they finally get good at forecasting their inventory needs, that’s when the supply could be impacted for off-price retailers, Brown notes. But that’s not likely to happen any time soon.

“Certainly, everyone needs to have an online presence since that’s the way so many consumers in North America discover product and brands,” Hartjen says.

Following TJ Maxx’s lead, Marshalls is the latest off-price chain to launch an e-commerce platform. “We see e-commerce as an important complement to our stores and another way to drive traffic and expand our customer base,” TJX Cos. said in a release.

While Burlington also sells online, Ross does not.

However, off-price retailers need to “try the e-commerce route because that is where the shopping journey starts,” says Weiss. “The challenge will be maintaining a low-cost business model.”

Shipping can be a challenge, as can adding in-store labor to collect online orders for BOPIS (buy online pick-up in store) options. But there may be ways to navigate those issues, such as a limited assortment online and minimum order sizes, Weiss notes.