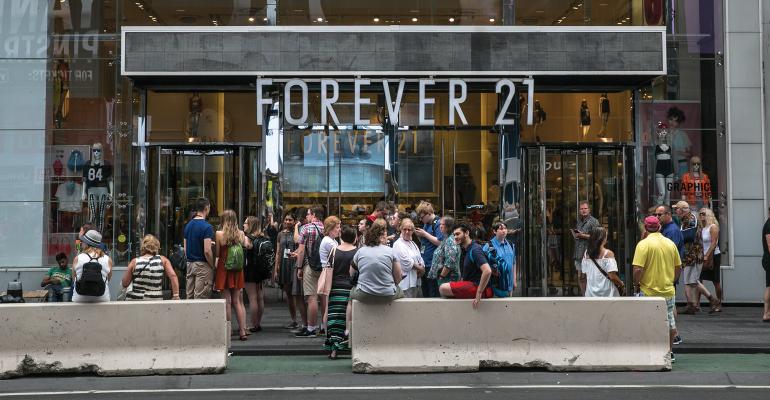 How Prevalent are Rent Renegotiations for Ailing Retailers?

With store closings piling up, retail landlords are finding it easier to agree reduced rents to keep tenants operating.

Fast-fashion retail giant Forever 21 will keep open 60 of its U.S. stores that previously were slated to be shuttered after the company filed for bankruptcy in September. That’s thanks to the struggling retailer securing rent cuts from its largest landlords, according to Bloomberg.

In September, Forever 21 said it would close up to 178 U.S. stores as part of its restructuring, as well as shutter most of its European and Asian locations. Now with the rent reductions, the retailer is looking at closing roughly 111 U.S. stores.

Forever 21’s status means many mall operators are willing to offer deals on rent to keep the mega-teen retailer operating at their malls, according to Sullivan. “What we understand with talking with the major landlords is that Forever 21—prior to when they filed Chapter 11—went around to the market and explained what was going on and what they were thinking of doing,” he says.

Additionally, the retailer is working to right-size its footprint and “give back the square footage where they just had too big of an appetite and were not hitting the productivity numbers,” he adds.

“And finally, they went to the landlords to try to negotiate some kind of rent relief.”

One of those landlords is Vornado Realty Trust, which has three Forever 21 locations at its properties in New York City. They’re located at 4 Union Square, 435 Seventh Avenue and 1540 Broadway.

The Forever 21 lease at 4 Union Square expires this month. That store is closing and part of the space has been leased to Whole Foods. The other two stores will operate at least for a while, and their rental rates were chopped in half.

“While the bankruptcy process is fluid and is still in its early stages, we have reached a tenant agreement with Forever 21 to shorten their leases and retain them in those two locations for a little less than half of their current rent,” said Vornado President Michael Franco during the company’s third-quarter earnings call. Vornado will have the right to “recapture the spaces at any time after the first year, enabling us to secure long-term tenants for these spaces.”

“That’s an extreme example [of rent reduction],” Sullivan notes. “The reason for that is the rents for street retail in New York City have been coming down anyway. “

Another mall operator offering rent reductions to Forever 21 is Macerich Co., which has 28 Forever 21 stores in its malls.

“We've been in weekly conversations and negotiations with them,” said Macerich CEO Tom O’Hern, during the company’s third-quarter earnings call. “Four of the stores will close later this year or early next year and one of those stores is not owned by us. There will be rent concessions on many of the other stores.”

In many cases, the rent concessions that landlords are providing Forever 21 are short-term, according to Sullivan. The mall owner has to figure out if Forever 21 is viable long-term. “What’s their footprint? What’s the productivity that they should expect? And as a result, what kind of occupancy costs should they be paying? That will take some time to figure out,” Sullivan says.

Mall operators can either reduce rents and offer concessions to flailing retailers or face vacancies—unless they have other tenants ready to move into the space.

“There’s no question that many lease renegotiations are taking place as the retail and shopping center industries adjust to the new reality of a mature industry paring obsolete and redundant retailers and shopping centers,” says Nick Egelanian, founder and president of SiteWorks Retail Real Estate Services, a retail real estate consultant firm based in Annapolis, Md.

The part of the industry that’s seeing the biggest adjustments is the regional mall sector, where former department store chains including J.C. Penney and Macy’s are fighting nearly 40 years of sales declines, Egelanian says.

That has left mall owners in an unfamiliar position of weakness.

“With retail failures in this sector increasing and department stores closing, except for the best A malls in the country, landlords are having to cut deals to retain tenants when malls fall out of compliance with co-tenancy requirements, and when retailers’ sales are simply insufficient to sustain the higher rents of earlier years,” Egelanian notes.

However, rent renegotiations are not confined to regional malls. So-called “high-street” rents in sub-markets like 5th Avenue in New York and Union Square in San Francisco have fallen up to 50 percent or more for larger spaces in recent years, he says.

The strip center portion of the business has also seen more rent reductions with the bankruptcy of retailers like Toys ‘R’ Us and downsizing of chains like Staples, Egelanian adds.

As always in this sector, however, there are wide variations in how this occurs depending on local supply and demand conditions.

What’s a landlord to do?

“And of course, the fact that we’re going to see 12,000 stores close this year” makes rent renegotiations even more prevalent, he notes. Coresight Research predicts announced U.S. store closures could reach 12,000 by year-end.

Retail vacancies look bad to consumers, Kniffen notes. “It looks horrible. It looks like this place is going out of business,” he says. He points to Aeropostale, which was saved by its landlords to prevent vacancies at their properties. “They basically stepped in and bought them out of bankruptcy, so they could keep them running in their malls.”

“The other thing you can do, of course, is when the [retailer] says, ‘I’m going to have to close that store because I’m not making any money,’ is say, ‘How about if I give you a better deal on the rent?’ That is, unless you have a better idea of what to do with that hole that’s going to be coming in your mall.”

It really doesn’t add much risk for the landlord, Kniffen notes. If there’s cash flow coming through the store—enough to pay whatever the reduced rent is—it’s certainly better than it not being there.

“To bring the next guy in, they’re going to have to pay some sort of buildout and that’s higher than ever,” he says.

Plus, it’s uncertain whether the landlord will be able to get the new tenant to pay a higher rental rate than the reduced rate offered to the existing tenant. As a result, Kniffen notes it’s getting easier and easier for landlords to make the decision to agree to rent cuts unless they are lucky enough to own one of the best properties in their market.