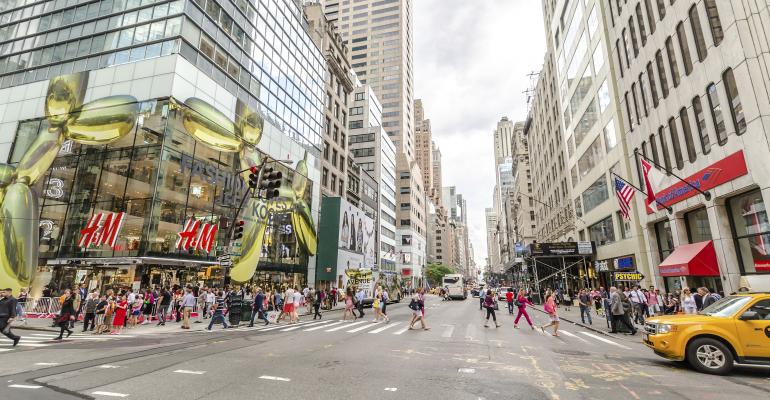 The area on Fifth Avenue between 42nd and 49th streets saw a 25 percent decline in retail rents since 2018.

(Bloomberg)—A few blocks makes all the difference when it comes to rent on Manhattan’s Fifth Avenue.

Lower Fifth Avenue, an area between 42nd and 49th streets, saw the biggest asking rent decline among Manhattan’s prominent retail corridors in the third quarter, falling 25% from the same period last year, according to a report by Jones Lang LaSalle Inc. In contrast, rents along upper Fifth Avenue, a swanky shopping district that runs from 49th Street north to Central Park, slipped just 0.7% over the same period.

Manhattan-wide, rents fell an average of 8.1%. The Meatpacking District, which has benefited from tourist traffic on the High Line, was the only submarket where rents climbed.

Rents on upper Fifth Avenue had surged in recent years, pushing out many of the street’s luxury retailers whose sales hadn’t kept pace. The cost increases have leveled out a bit, Smith said. On lower Fifth, some landlords who created oversized spaces in a bid to attract major chains are now struggling to fill those stores.

Vornado Realty Trust lamented the challenging environment for retailers on a recent earnings call. Topshop, the struggling British clothing chain, had a store in a Vornado building on lower Fifth that closed earlier this year.

“Tenants’ performances are not what they were a few years ago,” said Michael Franco, the company’s president.