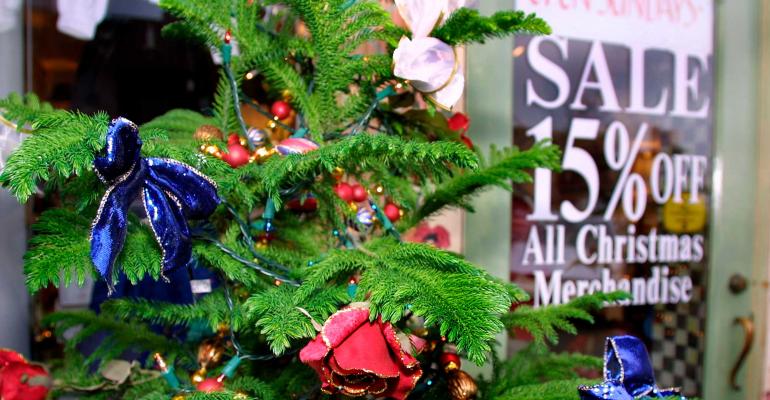 Retailers, Mall Landlords Prepare for Holiday Shopping Season Like No Other

The pandemic has pushed the start of the holiday sales season earlier than ever.

Due to the COVID-19 pandemic and economic anxiety, will it be “bah humbug” when it comes to U.S. holiday retail spending in 2020?

For retailers, he says this holiday season will likely push the boundaries on the importance of online sales, convenience, the role of physical stores, and safe, speedy fulfillment.

Deloitte projects U.S. holiday retail sales to increase by 1.0 percent to 1.5 percent, resulting in $1.147 trillion to $1.152 trillion from November to January. That’s down from growth of 4.1 percent during the 2019 holiday shopping season.

“For higher-income households of $100,000 and up, we see sales probably able to grow by 2 to 3 percent overall,” he says. “But those households making $50,000 and below have seen a tremendous impact related to COVID with the shutdown and high unemployment.” Sides estimates sales growth for lower-income households at zero to 1.0 percent.

“We think we’ll see the classic K-shaped recovery,” he notes.

He also points out that if Congress passes another stimulus bill, holiday sales might increase slightly over the current projection.

“We think that would help folks feel that they can spend a few extra dollars and still be able to pay rent and cover their other responsibilities,” Sides adds. “That could help bolster the recovery in the holidays.”

Consensus in the retail industry is that e-commerce sales will boom. Deloitte projects e-commerce sales to grow by 25 percent to 35 percent year-over-year during the holiday season compared to 14.7 percent in 2019. E-commerce holiday sales are expected to generate between $182 billion and $196 billion.

“It’s all about digital. It’s all about making it safe,” Sides says. “The big question is can supply chains keep up? I think most of that demand will be able to be soaked up somewhere. There are an awful lot of third-party delivery services that are available and trying to fill the gap.”

Commercial real estate services firm CBRE predicts a record growth rate in e-commerce sales of more than 40 percent in November and December, according to its 2020 U.S. Retail Holiday Trends Guide.

“We’re already forecasting that traffic and sales will be down in the physical stores, and retailers are adapting to prepare for that second surge of big e-commerce volume [following the first surge earlier in the pandemic],” says CBRE Global Head of Retail Research Meghann Martindale. “They know that because of a lot of safety concerns, consumers are going to do a lot more ordering online this year than ever before. We’re going to shatter all previous records.”

CBRE anticipates holiday retail sales to increase by less than 2.0 percent year-over-year, compared with the 4.1 percent average sales growth rate in the U.S. market since 2010.

Meanwhile, ICSC projects e-commerce sales will jump by 25 percent and anticipates a 1.9 percent rise in holiday spending. The average adult plans to spend $655 on holiday-related items in 2020, according to its annual holiday survey.

Additionally, due in part to COVID-19, the survey found 53 percent of consumers plan to use services like click-and-collect and curbside pickup. Also, 77 percent expect to start shopping earlier than they normally would.

It’s only October and holiday retail promotions are well under way, marking the earliest-ever launch of holiday shopping.

Retailers including Walmart, Best Buy, Target and Macy’s have already kicked off the holiday season in an effort to prevent shoppers from crowding their stores (with limited in-store capacity due to social distancing during the pandemic) and avoid shipping backups in November and December. COVID-19 has forced retailers and retail owners to rethink holiday plans.

In addition to an early start to holiday shopping, omnichannel services such as BOPIS (buy online, pick up in store) will change the nature of holiday shopping in 2020 as consumers seek safe alternatives to crowds in physical stores and malls this fall, says Deborah Weinswig, CEO/founder of retail and technology firm Coresight Research.

“The 2020 holiday retail shopping season is not going to be business as usual,” she says. Consumers have become cautious about in-store shopping, instead preferring to avoid public places and crowds and take advantage of contact-light fulfillment options, Weinswig notes.

A recent Coresight weekly survey of U.S. consumers shows that nearly 60 percent of consumers remain reluctant to enter stores and malls. “Some changed behaviors are likely to continue, with major implications for the holiday shopping season,” Weinswig adds.

Are consumers ready to shop early?

The big question is whether the consumer will follow the early shopping trends, Sides notes. “It will be interesting to see what happens with Prime Day and some of the other responses to see if there’s demand for it. Sometimes it’s hard to condition the consumer to move faster when they’re maybe not in the holiday spirit.”

Amazon held Prime Day in mid-October after cancelling it in July, and Walmart, Target and Best Buy soon followed with their own announced promotions.

Holiday shopping had already extended past the traditional five days from Thanksgiving to Cyber Monday, and now it will be spread out even more, says Martindale.

She notes that retailers and retail center owners are preparing to manage, operate and promote physical stores during the challenging pandemic.

“There’s just so much uncertainty tied to that,” she says. “There are some hot spots with the virus, and there’s having the ability to stay open barring any major unforeseen closures between now and December. They’re doing everything they can to make consumers feel safe coming back into shop.”

While safety, social distancing and crowd control are direct results of the virus, the retail sector is still trying to find ways to preserve traditions of the season.

“It’s been a long, hard year for consumers, so they still want to capture a piece of that,” Martindale says.

“It’s obviously going to look very different this year, since we’re not traveling and gathering and doing all of the things we usually do, but one key element is the effort to go above and beyond and try and preserve some of that holiday spirit that translates into shopping.”

For example, the Santa tradition will continue at Time Equities’ retail centers as they’re keeping as many of the events they did pre-COVID-19 that can be carried out with social-distancing measures and appropriate personal protective equipment (PPE), notes Ami Ziff, the company’s director of national retail. For example, Santa will be either behind a plexiglass or sitting at a table with children sitting on the opposite side to maintain social distancing and avoid plexiglass in photos.

With the K-shaped recovery, some experts expect luxury retailers to benefit the most during this year’s holiday season. “Shoppers appear to be trading up to more premium products. Moreover, with the savings rate up, there are tens of billions of dollars in pent-up spending that could flow into retail,” Weinswig says.

Sides also believes high-end retailers will hold their own. “I would rather be at opposite sides of the spectrum than the middle,” he says.

Deloitte has always included travel in its holiday sales forecast. “People aren’t going to travel home to see grandma this year, because of the safety element, so I think we’re going to find things like home furnishings have a chance to grow at the expense of travel,” Sides notes.

“If I’m going to be home for the holidays, I may get that extra decoration. I may do more with my tree.  I may entertain a handful of folks in the home. That [home goods] category has a chance to explode.”

In terms of products/gifts, there’s an “absolute continuation of everything related to the homebody lifestyle” that everyone has been living, according to Martindale. That includes home décor, furnishings, athleisure wear and beauty.

Anything DYI-related, like home projects as well as home entertainment, fitness and gaming, should thrive as well, she adds.

And of course essential retailers and discounters are expected to outperform, Ziff notes. “The merchants that reinvent their businesses and embrace BOPIS will surely have an edge,” he says.