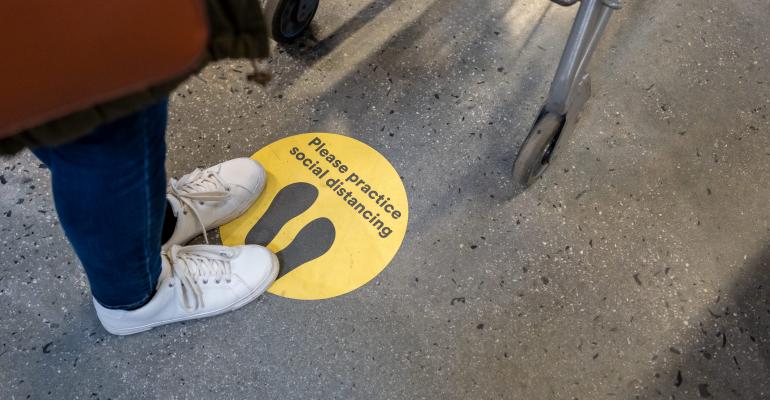 Scarred and Scared, the Reshaping of American Consumers Begins

“The psychological impact of risk aversion setting in cannot be understated,” HSBC’s James Pomeroy and Fabio Balboni wrote in a May 1 note.

(Bloomberg)—David Wright, 62, stood at the door of his Replay Arcade last week, trying to look at the bright side of things. The sole owner, he’s a tenant at the Mall of Georgia, which shut for a month but re-opened on May 4.

“Traffic is about 10% of normal, but that’s 10% better than zero,” he chuckled in a phone interview from his business just outside Atlanta.

Even with the rosy assumption that the Covid-19 virus will be contained in the coming weeks, the U.S. economy is in for a slow and painful struggle back from this devastating public health crisis.

Consumers drive 70% of U.S. gross domestic product and they’ve been dealt multiple blows. For some it’s a direct hit to their bank account. For others it’s a shot to their psyches as earners, spenders and social animals.

“We can’t just flip the switch,” said Claudia Sahm, director of macroeconomic policy at the Washington Center for Equitable Growth. “Just because you can go to the store and buy things again, doesn’t mean you will.”

There will doubtlessly be cheerleading from elected officials and business leaders as restrictions are slowly lifted. Already there’s talk of pent-up demand as consumers dream about getting out of the house for more than groceries and prescriptions.

That may be true in some areas, like health care services, where important but non-urgent physician visits and medical procedures were postponed. More broadly, the reality is likely to be disappointing.

For starters, more than 33 million Americans have lost their jobs in the seven weeks since wide swaths of the U.S. economy shuttered to stem the outbreak. Many may end up being out of work for the long-term, outlasting unemployment benefits that will typically end after 39 weeks, and far past the federal government’s $600 weekly supplement that’s set to expire on July 31.

“There’s willingness to spend and there’s ability to spend,” said Jack Kleinhenz, chief economist for the National Federation of Retailers. “For many people, their ability to spend has been negated.”

Severe economic shocks can even scar those who hang on to their jobs but are rattled watching friends, neighbors or relatives lose their work. Economists said it’s also worth noting this is the second recession in the space of 12 years that Americans have been told is the worst since the Great Depression.

Richard Curtin, director of the University of Michigan’s Survey of Consumers, worries the cumulative effect, especially on younger generations, could compare to the devastating impact in the 1930s had on the psychology of Americans.

“The Great Depression affected people their whole lives, and that could be true now for millennials,” he said.

There’s also an additional layer this time. This crash was triggered by a virus that, itself, can kill. How that will affect consumption is unclear. Early signs from economies that are already re-opening, and from surveys of consumer attitudes, don’t look promising.

Data from China, where the virus appeared first and where many restrictions have been relaxed, point to a slow recovery of consumer spending, according to a note from economists at HSBC Bank in London. And in Sweden, though bars and restaurants have remained open throughout the contagion, patrons have largely stayed away.

Polling by YouGov showed 57% of Americans were “very” or “somewhat” scared they might contract the virus. Among 26 countries surveyed since April 24, the average was 62%, with only Finland below 40%.

“The psychological impact of risk aversion setting in cannot be understated,” HSBC’s James Pomeroy and Fabio Balboni wrote in their May 1 note. “Until people feel safe returning to places where large crowds are prevalent -- such as public transport, bars, restaurants and many recreational venues -- consumer spending in this part of the economy is likely to remain subdued.”

In the U.S., industry groups are making a big effort to help boost confidence. Groups like the National Restaurant Association are offering extensive guidelines, often in conjunction with government agencies like the Centers for Disease Control and Prevention, on how businesses should go about re-opening.

At Wright’s arcade in the Atlanta-area mall, he’s made every effort to keep his operation safe and reassure customers. The pinball machines and other games are spaced farther apart. Staff wear masks and gloves and add their own constant cleaning efforts. But he’s resigned to a slow return of his clientele.

“This might take a long, long time for people to feel comfortable again,” he laments.

Curtin, who conducts monthly surveys on consumer behavior, expects companies will have a hard time reassuring people because risks trigger an emotional response.

“However much you enjoyed flying, or going on vacation or to a restaurant, you’ll be a little more hesitant,” he said. “The cognitive system we can turn on and off almost immediately, but emotions we can’t turn on and off.”

To contact the reporter on this story: Christopher Condon in Washington at [email protected].

To contact the editors responsible for this story: Margaret Collins at [email protected]