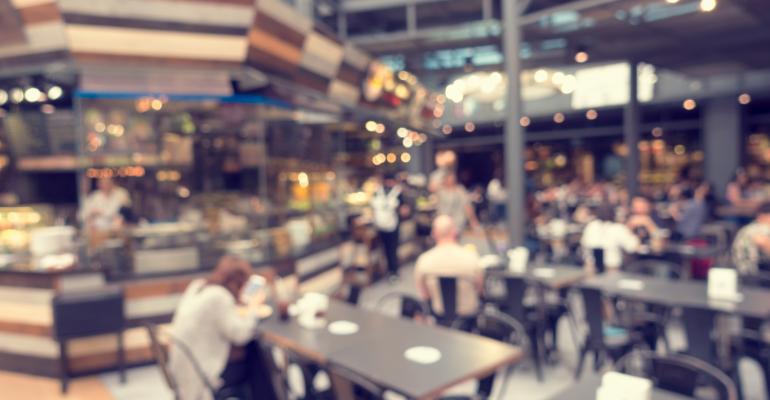 The Shopping Mall’s Savior Is Starting to Eat Itself

Restaurants, one of the supposed saviors of regional malls, have been hurt in the past 12 months by too much expansion and a slowdown in consumer spending.

(Bloomberg)—Stephen Wall’s restaurant chain Pho is the kind of tenant that mall landlords would love to attract. The Vietnamese menu is right on trend, the business is expanding and, even better, it has a track record of success in shopping centers.

Yet he thinks that even restaurants like his won’t be the savior of malls suffering from the rise of internet retailing and mobile phone addiction.

“Food is not the solution for most landlords. Saturation has occurred because too many restaurants are being put into shopping centers,” said Wall, who founded the U.K. chain with his wife, Jules, in 2005. “Operators are becoming wary.”

As competition from the likes of Amazon.com Inc. and Asos Plc intensified, British mall owners looked to food as a way to stay relevant. People would come to the restaurants to eat, buy some clothes in the shops while there, and the extra spending would allow the landlord to boost the rents. A simple, virtuous circle.

Instead, food and beverage operators have been hurt over the past 12 months by a combination of rapid expansion and a consumer-spending slowdown. An influx of private-equity investment into restaurants led some chains to open too many outlets that aren’t breaking even. Popular names like Gourmet Burger Kitchen, pasta place Carluccio’s and the Jamie Oliver chain — often found at big malls like Westfield and Bluewater around London or Manchester’s Trafford Centre — have been among those suffering. Nationwide, the number of restaurants going insolvent rose 24 percent last year, compared with 2017.

A combination of increased competition, rising food costs because of the pound’s weakness after the Brexit vote and a government apprenticeship levy have hurt operators. Many of the brands are also very similar, and consumers can’t differentiate between them in any way other than price, according to James Child, a retail analyst with EG.

Three years ago, Intu Properties Plc, the owner of 17 U.K. malls including two of the nation’s largest, pointed analysts to research from a broker estimating food and beverage operators would eventually occupy about 25 percent of space in malls. New brands would be launched that would help drive revenue for owners, the analysis said. When the beleaguered landlord, left at the altar by two potential buyers last year, announced a turnaround plan in July, food didn’t merit a mention. Instead, Intu’s new hope is that salvation lies in building hotels and apartments at its malls. The stock is down 56 percent in the past year.

Any landlord still waiting for food operators to help them out will likely be disappointed. Food and drink operators took 13 percent of newly leased space in shopping malls in 2018, the lowest level in at least six years, according to Radius Data Exchange. A year earlier, it was 20 percent. That’s a much wider decline than in the overall retail market, where food and beverage businesses took 23 percent of newly rented space in 2018, about three percentage points less than in 2017.

One of the main problems is that the malls are competing for diners with downtown areas, which offer many more attractions. In London’s West End you are feeding people who are in the area for work, the theater, shopping or just wandering around, said Brian Bickell, chief executive officer at Shaftesbury Plc, which recently leased a former retail center in the Covent Garden neighborhood as a food hall.

Malls, by contrast, offer far more capacity than there is demand, according to Ewan Venters, CEO at Fortnum & Mason, the upmarket retailer which recently opened a dining area in the Royal Exchange, a small luxury mall opposite the Bank of England.

“The whole thing of the experience economy came in. You’re not just trying to sell to people. You are trying to entertain them,” Venters said. “It all happened very quickly in malls, and suddenly there was too much capacity and not enough people to eat breakfast, lunch and dinner in these vast places. I’m not surprised they are cutting back now.”

Mall landlords may do well to take a step back and draw inspiration from other types of locations, said Sue Munden, an analyst at Bloomberg Intelligence.

“One of the problems is that landlords have not taken enough care in the curation of the space,” Munden said. “Mixing locally inspired offers with some known brands might be a more successful strategy.”

Shopping centers aren’t getting much relief from their traditional tenants either after a year of struggle, and it may only get worse. Brands such as Debenhams Plc, Marks & Spencer Group Plc and New Look have already vowed to close stores. A dismal Christmas performance could accelerate the trend and add more vacancies for landlords.

To succeed, malls will need to add hotels, apartments and leisure attractions, helping to create mixed-use neighborhoods, said Des Gunewardena, chairman and chief executive officer at the restaurant group D&D London. “That’s the future in my view,” he said. “Shopping malls are not going to be saved by casual dining chains.”

As anchor tenants continue to decline, restaurants that want to expand will think twice about renting space in malls, according to Paul Goodale, restaurateur and founder of consultancy Epicurean Holdings.

“It’s not going to get easier in the next 12 months in shopping centers,” Goodale said. “You can’t rely on the footfall going to shops to peel off to restaurants because people aren’t going to shops anymore.”

With more doom and gloom on the horizon in the form of Brexit, landlords may need to accept that a boom in food businesses can’t simply replace the bust of retail shops.

“The economy has changed. Operators and retail developers have to be more sensible,” Wall of Pho said. “We just need a large dose of common sense.”