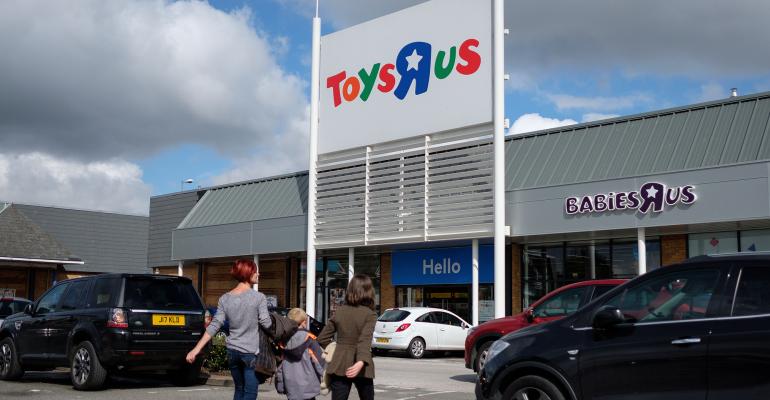 In a bankruptcy court filing, the retailer’s lenders said they are seeking to reorganize assets into a new company that can invest in new retail operating businesses.

(Bloomberg)—Geoffrey the Giraffe may be coming back to life.

The Toys “R” Us Inc. lenders that took control of the retailer during its liquidation -- and have faced criticism for their role in the shutdown -- are now working on resuscitating the brand, according to new court documents.

In a bankruptcy court filing Monday, the funds said they had canceled a plan to auction off the company’s intellectual property. Instead, they are seeking to reorganize the assets into a new company that will maintain the current license agreements and can invest in new retail operating businesses.

Maintaining the brands under a new independent U.S. business is the best option for the Toys “R” Us estate and for other indirect and direct stakeholders, according to the filing, which says bids from outside investors for the assets “were not reasonably likely to yield a superior alternative.”

A group of funds that financed Toys “R” Us lenders during the bankruptcy now control rights to the company’s name and that of Babies “R” Us, because the intellectual property served as collateral on their loans. The group includes Solus Alternative Asset Management and Angelo Gordon, which have been the focus of a worker advocacy campaign seeking contributions to a hardship fund for former employees.

As owners of the new entity, the funds will have discretion over trademarks -- such as the Geoffrey the Giraffe mascot -- and receive royalty payments from their use internationally. But it may prove difficult to ramp up U.S. operations again given the fallout from the protracted bankruptcy process. Major suppliers including Mattel Inc. and Hasbro Inc. have found new distributors, and customers have largely moved on.

“The company did generate operating profits -- and without debt, its profitability would be easier to maintain,” said Seth R. Freeman, senior managing director at GlassRatner Advisory & Capital Group in its San Francisco office. “Still, the timing of this move means the new company misses the critical holiday season, in which 34 percent of Toys ‘R’ Us merchandise is typically sold, giving it a tough three quarters of 2019 to slog through till holiday 2019.”

Toys has sold all of its stores and distribution centers, with some of the most valuable retail space going to a separate group of secured creditors. Other stores were either taken over by landlords or the leases sold to other retailers.

Solus and Oaktree have been battling a group of lenders, including Cerberus Capital Management and Cyrus Capital Partners who are trying to take over Toys’ Asia operations. The two groups of lenders have fought over how much the Asia stores should pay to use the Toys “R” Us name and other intellectual property.