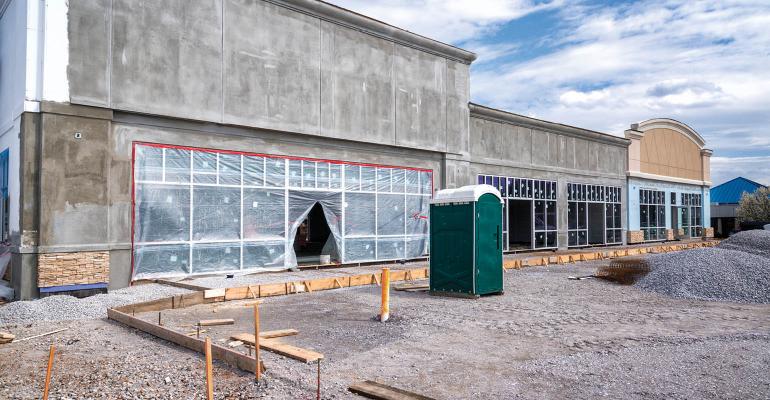 Few new retail centers are under construction. Those that are involve either neighborhood shopping centers or mixed-use projects.

With the continued barrage of retail bankruptcies, stores closures, repositionings and rightsizings of store fleets—and the fact that many experts say the U.S. is over-retailed—it probably comes as no surprise that retail construction levels remain well below pre-recession levels.

“Another factor is with some of these larger shopping centers, the development is focused more on building complementary property types,” notes Alexander Levy, a consultant at research firm CoStar Group Inc. “You might see a mall and they will add on apartments or offices or hotels nearby and then it becomes more of a  mixed-use property. That’s been growing coming out of the recession.”

That number fell during the recession and has continued to drop during the expansion phase of this cycle. From 2010 to 2012, an average of just under 60 million sq. ft. of retail space a year was under construction, CoStar reports. Since 2013, retail construction has rebounded: 2013 to 2018 saw an average of 90 million sq. ft., a high for this cycle.

This year, however, looks to be a dip from previous years’ performance.

What was delivered in the past compared to now?

In terms of the number of retail buildings being built, 2007 saw 18,000 deliveries, CoStar data shows. In 2010, that number dropped below 6,000 deliveries. While the market has seen an uptick in delivered buildings over the past several years, that trend is tapering off for 2018 and 2019 as well. This year, 6,500 new retail buildings are expected to be delivered across the United States.

Type of retail being built is changing

“Neighborhood centers have performed relatively well this cycle fundamentally,” says Robin Trantham, a consultant at CoStar. “Vacancies have come way down, and that’s largely due to the grocery sector performance.”

Grocers often anchor neighborhood shopping centers, and they’ve generally been able to “avoid the threats that e-commerce has presented to a large portion of the retail market,” he notes.

Meanwhile, power centers have experienced a significant decline and have been superseded by community centers. “Power centers rely heavily upon anchor tenants that have struggled with coping with the threat of e-commerce this cycle,” Trantham notes.

According to Moody’s Analytics Reis, which tracks neighborhood and community shopping centers, both new completions and net absorption slowed in the third quarter of 2019 as fewer developers are building “traditional” neighborhood and community shopping centers. However, a recent report from the firm noted that “tenants are leasing stores in what’s getting built as shoppers prefer the new over the old in any market.”

New retail construction is generally following demographic growth—whether it’s population growth or income growth—and as a result, markets in the Southeast U.S. are seeing the most significant amount of activity, according to Trantham. He points to Jacksonville, Tampa and Orlando in Florida and Charlotte and Raleigh in North Carolina as examples.

“In general, retail construction is down and has been since the recession, which is not really a bad thing considering how much retail we have in the U.S.,” says Taylor Coyne, research manager, U.S. retail, for commercial real estate services firm JLL. “We’re over-retailed compared to any other comparable country.”

For example, 46 percent of gross leasable area throughout U.S. retail centers is devoted to department stores, compared to only 27 percent in the U.K., the region with the next largest percentage, according to a 2017 JLL report. That has become an issue as department stores have struggled in recent years.

But while retail construction across the board has slowed in response to market conditions, the one area experiencing significant activity is what JLL terms “general retail” or essentially “mixed-use.”

“Much of the retail that’s being constructed and delivered has to do with these larger, mixed-use projects with residential and hotels and office space,” Coyne says. Developers are becoming “smarter about creating places where we all want to go.”

JLL reports that approximately 78.4 million sq. ft. of retail space is under construction in the United States. However, the company projects a big bump in activity in 2020 when including all of the mixed-use development in the works. Proposed future retail development is more than four times the volume of current construction, totaling more than 345 million sq. ft., with more than 40 percent of that space anticipated to be delivered by year-end 2020, JLL notes in its Retail Outlook Q2 2019 report.

Developers remain focused on mixed-use, experiential projects that combine retail with residential, hotel and/or office space, and most of these spaces are pre-leased, JLL reports. These projects typically feature multiple food and beverage tenants, entertainment concepts and community elements like public plazas and art museums. Many of these construction projects are in high-density urban areas.

Meanwhile, the Realm is a master-planned, 324-acre, mixed-use community with retail, office and upscale living in Lewisville, Texas. And there is the SoNo Collection, a 700,000-sq.-ft. mall in Norwalk, Conn. that will include public plazas and a rooftop garden.

Future projects include American Dream Miami, a 3.5-million-sq.-ft. retail/entertainment complex in Miami. In addition, 100 V Street SW is a 2-million-sq.-ft., mixed-use development in Washington, D.C., that will include retail, residential, hotel and office. And The Railyards is a 244-acre, mixed-use urban development in Sacramento, Calif. that will feature retail, office, residential and a hotel.