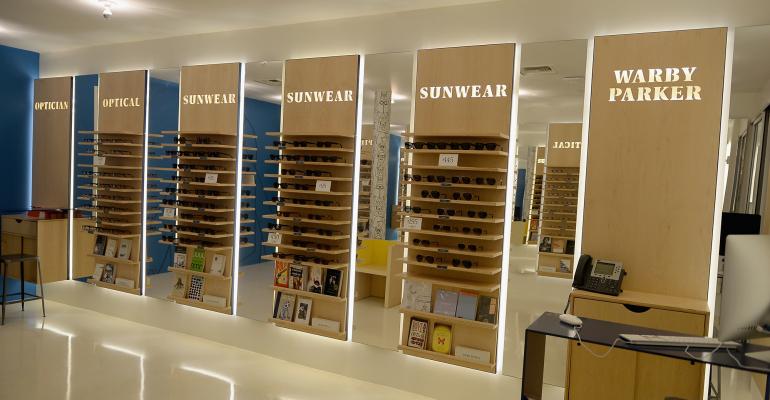 Warby Parker Is Coming to a Suburban Mall Near You

Last month, Warby Parker opened a store in a former GameStop next to a Chick-fil-A in Raleigh, North Carolina. In April, the eyewear brand debuted in Alabama.

(Bloomberg)—Stores are so 20th century.

At least that’s what many online brands believed. Companies like Warby Parker, Bonobos and Casper didn’t need physical locations to win over millennials and steal market share; a well-designed website was more than enough. And who could fault their logic? Given the brick-and-mortar carnage across America, the evidence seemed overwhelming.

Then a funny thing happened on the way to the retail apocalypse. Stiffening competition, surging online advertising costs and cheap mall space have prompted these so-called digital natives to embrace what they call “offline” in a big way. In their push to become retail’s next household names they’re venturing beyond the coasts and major cities into suburban America. It’s also an acknowledgement that 90 cents of every retail dollar in the U.S. is still spent at a physical location, and industry watchers don’t expect it to fall below 75 cents until the middle of next decade.

The “clicks-to-bricks” phenomenon encompasses big names like Amazon Books and Casper as well as less-known startups such as men’s shorts purveyor Chubbies and hair color brand Madison Reed. All told, these digital natives now operate more than 600 stores across the country, according to Green Street Advisors, a real estate research firm.

“What some brands are starting to figure out is, ‘Oh wait, perhaps these retailers who have been around for 100 years were onto something,’” says Jared Blank, a senior vice president at Bluecore, an ad consulting firm. “You will definitely see more of these insurgents coming into brick and mortar.” Micky Onvural, who runs Bonobos, says mall operators increasingly see the menswear company as an anchor tenant. “They want us there,” she says.

If physical outposts were initially exercises in branding and publicity, they’re now core to long-term growth. Retail startups are even starting to include a store opening plan in pitches to venture firms. Many cite the success of a pop-up location to show that they can leverage their online customers and stand out from their online-only competitors.

Everlane founder Michael Preysman, who once proclaimed he’d rather shut down his clothing brand than sign a lease, operates two stores and is considering more. Casper, which popularized the “bed-in-a-box,” has about 20 stores and plans open 10 times as many in the next three years. Warby Parker expects to have 100 stores by the end of this year—giving the optical chain the biggest store fleet among these upstarts.

The stores are popping up in places you’d least expect. Last month, Warby Parker opened a store in a former GameStop next to a Chick-fil-A in Raleigh, North Carolina. In April, the eyewear brand debuted in Alabama. Bonobos, acquired last year by Walmart Inc., recently opened in Lexington, Kentucky, and will soon have more than 60 locations.

Real estate firm CBL Properties says one digital native is looking at a property in Laredo, Texas,  along the border with Mexico. UntuckIt—which has been selling shirts since 2011—tested a pop-up at the end of 2015 in Manhattan and now has almost four dozen permanent locations, including one in the Mall of America, adjacent to a Crocs store. It wants to hit 150 by the end of 2020.

“A lot of people ask, ‘Why are you opening stores so fast?’” says Chris Riccobono, UntuckIt’s founder. “Well, all of our stores are performing well.”

Here’s another reason: Online advertising is no longer the growth accelerant it was. Buying ads on Google, Facebook and Instagram once made a lot of sense because nascent brands could narrowly target shoppers and grow fast, pleasing their venture capital backers. Now social feeds are jammed with posts from obscure brands hawking everything from sneakers to generic Viagra. The competition for eyeballs has pushed up the cost of ads even as those ads become less effective because there are so many of them clamoring for attention. Much the same thing is happening offline too with subway ads, direct mail, podcasts and television.

Meanwhile, opening a physical location has become cheaper as retailers shed stores or died, creating millions of square feet of prime space all over the country. Spurred by the woes at department-store chain Sears, mall vacancy rates hit 9.1 percent last quarter—the highest since the depths of the recession. The digital natives realized it made more sense opening stores than relying on pricey Google and Facebook ads.

Retail landlords understand that these upstarts typically require less space than traditional retailers because many of them don’t carry inventory. But that hasn’t prevented battered mall owners from seizing the opportunity with both fists. Many have created recruiting teams focused on digital natives and are using sweetheart deals and perks once reserved for established brands like Apple Inc. or Barnes & Noble Inc.

“It’s extremely competitive,” says Jim Ward, who in February was appointed to a newly created position to head up recruiting digital natives for CBL. “Every landlord out there is looking for these new, exciting concepts.”

To land them, landlords aren’t demanding the long-term commitments once considered standard and are instead offering leases as short as a year with extension options. That flexibility extends to temporary locations, too, with spaces dedicated to rotating pop-ups so the tenants can easily test concepts. To further reduce risk, they’re offering to help pay for store remodeling and taking a small percentage of sales instead of monthly rent.

Some shopping centers are becoming venture capitalists, investing in promising retail startups that could become future tenants. Simon Ventures, sponsored by Simon Property Group, the largest U.S. mall owner, has a stake in Dirty Lemon, a beverage startup that opened its first store last month. The downtown Manhattan location doesn't have any staff, and shoppers pay via text message.

Now that they’ve gotten brick-and-mortar religion, the brands are starting to understand why Macy’s has 850 locations. A physical store uses the power of instant gratification, merchandising, employee service and dressing rooms to get shoppers to buy more and return fewer items, which boosts profits. Alexa Buckley, who co-founded women’s shoe purveyor Margaux, figured out the merits of having a store when she rented a loft space in Philadelphia. Despite heavy rains and wind from the remnants of a hurricane, 200 women showed up and generated almost a month’s worth of sales.

“It was the craziest three hours of my life,” Buckley recalls. “It was like nothing we could have anticipated, in terms of the appetite for this offline experience.”

Margaux tested temporary stores in cities like Atlanta, Boston and Dallas and got the same results. Some customers needed to try on the shoes in person before committing to that first purchase, and offline shoppers spent more (today the spread is 13 percent) and returned less. In July, Margaux opened a permanent store in Manhattan’s Greenwich Village. She’s planning more. “It is a customer acquisition necessity for us,” Buckley says. “We’re finding that continually in city after city.”

Going offline marked the moment UntuckIt took off. By late 2015, the company had already become an aggressive advertiser online and by traditional means such as print and radio, but when it opened a pop-up store in Manhattan the effect of all that marketing multiplied.

Profit margins were better, too, without paying for shipping or as many returns. Plus, offline customers bought more and after the store’s debut, there was a noticeable lift in the surrounding area’s online sales. On the heels of that brick-and-mortar success, Kleiner Perkins Caufield & Byers, an early Amazon backer, invested $30 million in UntuckIt so it could open more stores.

“Stores took us to a different level,” says Riccobono, the UnutckIt founder. “Customers who didn’t want to buy a $98 shirt because they weren’t sure if we’re just another fly-by-night e-comm company started taking us very seriously.”

Bonobos’s “guide shops” are set up for customers to try on and order clothes (there’s no inventory) and have become as important to the marketing mix as glossy catalogs and TV commercials.  Bonobos focuses not on sales-per-square-foot—a traditional industry metric—but on how much the stores drive sales online and off in a particular market. Bonobos has discovered that new customers who visit its stores typically spend 20 percent more than they would if starting their experience online.

Bonobos CEO Onvural likens each store to a “ginormous billboard.”

In embracing the offline world, the digital natives have absorbed many of the lessons honed by retailers for the past century: that people like to feel the fabric, try on glasses, get face-to-face shopping tips. The question is whether Bonobos, Warby Parker and the rest have also learned the painful lessons—how over-expanding can cannibalize existing stores—that laid low so many specialty retailers in recent years.

The digital natives say they’re smarter. That they have better data about their customers. That they won’t make the same mistakes. Of course, they also said physical stores were a relic of the past.

To contact the author of this story: Matthew Townsend in New York at [email protected]