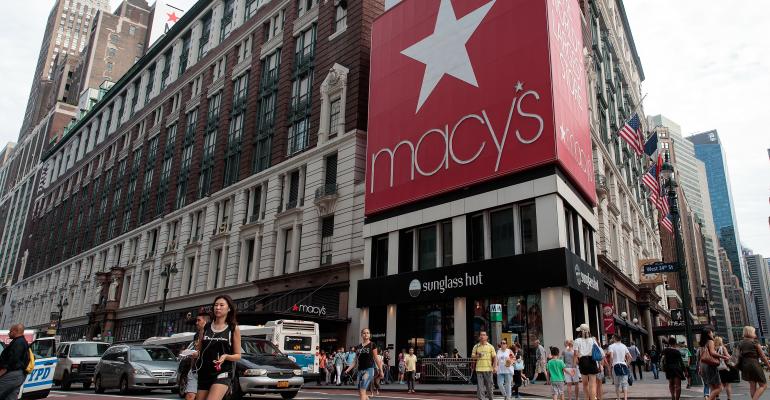 What Can Building a Tower on Top of its Herald Square Store Do for Macy’s?

Seeking to cash in on its most valuable real estate asset, Macy Inc.’s CEO Jeff Gennette confirmed that the department store retailer is considering plans to build a 1.2-million-sq.-ft. skyscraper on top of its Herald Square flagship store in Manhattan, Bloomberg reported last week.

The tower would be leased to other office tenants, and Gennette said he hopes to have a plan in place by year-end.

During Macy’s earnings call in February, Gennette said, “In any strategy, to unlock additional real estate value will be on a long-term horizon,” and that Macy’s would “certainly preserve the store and enhance the customer experience.”

Gennette added that over the last year and a half, Macy’s has been working closely with a team of land use, development and design experts to produce a “menu of economically viable redevelopment alternatives.”

While a Macy’s spokesperson had no comment on the most recent announcement, she said in an emailed statement to NREI that Macy’s has met with city, government and community leaders as they deliberate on the right opportunity for Macy’s and the surrounding neighborhood.

“Based on these discussions, we believe the best way to unlock the store’s underlying real estate value and promote economic activity in the area is to build a commercial office tower, while continuing to operate this iconic store as our national flagship,” she said. The company is still early in this process and there are a “number of hurdles we need to cross before we can share more concrete details.”

Macy’s would likely push for rezoning that would allow for greater density on the site. Reports are that the proposed office tower could bring in some 6,000 additional people to the area.

The iconic Macy’s building was built in 1901 and covers nearly an entire city block from Broadway to Seventh Avenue and 34th to 35th streets. The 2.2-million-sq.-ft. building contains about 1.1 million sq. ft. of retail space, with Macy’s offices occupying a large chunk of the building’s upper floors. The store is one of the biggest department stores in the world.

“I think if it can be done, it’s brilliant. It’s a great utilization of the space,”’ says Jeffrey Roseman, vice chairman and founding partner at commercial real estate services firms Newmark Grubb Knight Frank in New York City. “It’s arguably one of the best corners on the planet.”

Everybody loves Macy’s, Roseman adds, pointing to the Macy’s Thanksgiving Day Parade and the Christmas movie Miracle on 34 Street. “It’s such an iconic store that people will certainly be interested in it. It’s a neat story.”

One concern, he notes, is the logistics of constructing a tower on top of a department store. “What does that look like from a construction standpoint, from a scaffolding standpoint? And what length of time is the store going to be put out [by the construction]?”

However, Roseman points to developer SL Green, which is developing One Vanderbilt, a 1.7-million-sq.-ft. skyscraper on the corner of 42nd Street and Vanderbilt Avenue in Midtown Manhattan. It’s being built near Grand Central Terminal, and to the developer’s credit, Roseman says they’ve “done it very uneventfully.” The tower is slated to open in 2020.

The difference, however, there was no billion-dollar department store beneath that construction project. “Would it change your shopping pattern if you had to walk around barriers to get into the store? I don’t know.”

“Long term, this is a great real estate play,” says Jerry Hoffman, a partner with the Hoffman Strategy Group, a Lincoln, Neb.-based national commercial real estate advisory firm specializing in retail and mixed use. “It’s very valuable real estate. You can’t really go out and buy property anymore, particularly in Manhattan, and so being able to get the kind of economic value out of the real estate that building vertically will bring is a huge opportunity for Macy’s.”

The tower would be a significant traffic driver for the area. Hoffman has heard that there would be between 6,000 and 8,000 new employees at the proposed building.

“I think the potential spending on retail, food and beverage from the 6,000 to 8,000 workers is going to be around $30 million on an annual basis,” he says. “That goes into department stores, drugstores, supermarkets, the Equinox memberships and it also interacts with the rents and the housing in the area. It drives demand for more apartment units.”

Selling off real estate to cash in on value

In the past few years, Macy’s has been selling real estate to generate additional capital as malls and department stores suffer from weaker traffic and more online competition, which impacts sales and profitability.

“We had another quarter of double-digit growth in our digital business, and mobile continues to be our fastest-growing channel,” Gennette said in a statement.

However, Macy’s like all department store retailers, continue to face challenges in drawing shoppers. For the full year, the company predicts same-store sales will be flat to up 1 percent.