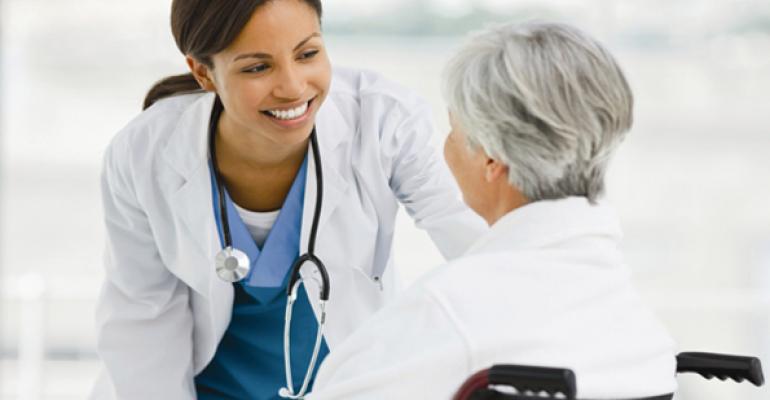 Just when Americans were getting used to the coming wave of older Americans retiring and needing services—the silver tsunami, as some call it—the conversation has taken on a much different tone.

Occupancy levels at nursing homes around the country have hit 82.2 percent, a five-year low for the skilled nursing profession, according the National Investment Center for Seniors Housing & Care (NIC). A notable drop in skilled mix, the industry term referring to the level of nursing and other patient care administered in nursing homes, was the main driver of the overall dip in nursing home occupancy, according to NIC’s report.

That metric was 13.5 percent, a 107 basis-point dip from the previous quarter.

Occupancy levels sometimes fall seasonally. The five-year low suggested that fundamental changes in the seniors housing industry, including government-mandated payment processes, are happening, according to officials at the NIC.

“There is a lot going on in the skilled nursing industry,” says Bill Kauffman, a senior principal at NIC. “This has a lot more nuances than just the retirement community.”

True enough, changes in Medicaid and Medicare reimbursements are helping to shorten patient stays and contribute to nursing home occupancy levels. The Centers for Medicare & Medicaid Services has been calling for reforms in the way that medical service providers, including nursing homes, receive reimbursement for their work.

Changes include shortened patient stays and consolidating or bundling reimbursements for the myriad services that patients receive during a medical incident, Kauffman says. Bundling refers to the Bundled Payments for Care Improvement initiatives. Under it, participating organizations agree to payment arrangements with Medicare and Medicaid. The aim is to improve care under the models to attain higher quality care, and more coordinated care at lower costs.

The concept was initiated in the United States through the passage of the Affordable Care Act. In the long run, the changes could have implications for the number of seniors housing properties available to future residents and investors.

A noticeable amount of contraction

Already the profession is beginning to undergo tangible changes. The Centers for Disease Control found that in 2014 there were 15,600 nursing homes delivering long-term care in the United States. That was down from the 15,700 nursing homes that delivered care in 2012.

“There is a huge push to drive the length of stay lower,” Kauffman says. “When you have a lower length of stay, you can expect to have pressure on occupancy, too.”

The NIC found that the managed care portion of nursing home revenues, also referred to as managed Medicare because of that agency provides reimbursement, declined in the second quarter. The managed care revenue per patient day dropped to $437.85 per day, although the dip was less severe than in previous quarters.

Private revenue per patient day, however, which indicates from insurance and out-of-pocket proceeds, have kept up with inflation and not dipped. That payment rate was about $250 per day.

The whittling of nursing homes is bound to affect cap rates.

In some cases, nursing homes with unsustainably low occupancies simply close, much like the Marshall Lane Manor in Derby, Conn., which closed in June 2015. Home health care had absorbed some of the clientele from nursing home vacancies.

But that doesn’t mean opportunities in seniors housing are simply going away. While noting the decline in nursing homes, the CDC also found an increase in occupants at residential care communities. In 2012, about 713,300 elder Americans were in residential care communities, and by 2014 the number had increased to 835,200. Also, the number of adult day care service centers remained steady from 2012 to 2014, at 4,800. 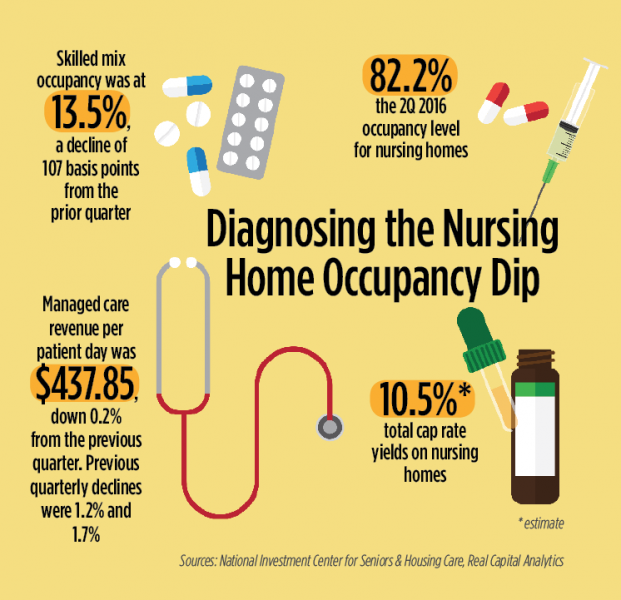