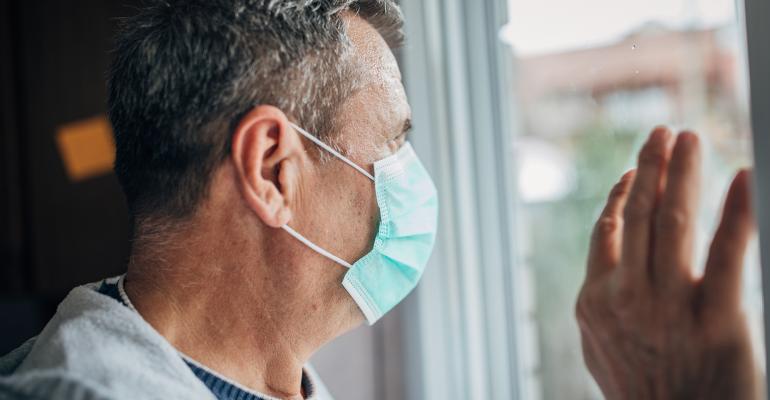 Retirement Communities Financed by Munis Pushed to Edge by Virus

Since early March, at least five retirement communities have missed a debt payment, draw on reserves or violated bond covenants.

(Bloomberg)—The coronavirus, especially lethal to the elderly, is pushing a growing number of retirement communities into financial turmoil and fueling distress in the municipal bonds that financed them.

Henry Ford Village, a 1,040-bed community in Dearborn, Michigan, has incurred “extraordinary expenses,” to contain an outbreak of the new coronavirus, which has killed at least 26 residents. Unable to accept new occupants, the operator is using a stimulus loan to make payroll and drew on a debt service reserve to make a May 15 interest payment.

StoryPoint Senior Living has canceled tours at four new facilities in Indiana and Ohio and reported it doesn’t expect occupancy to increase through July. StoryPoint, projecting a $5 million operating loss this year, wants bondholders to forgo interest payments for the next 12 months.

“We believe the senior housing industry has a very bright future,” said Brian Stoy, an executive with Common Sail Investment Group and StoryPoint Investments, said in a May 12 call with bondholders. “Short term, however, we are playing defense and for the next 18 months we are in the fight of our lives until there’s a vaccine for Covid-19.”

Since the beginning of March, at least five retirement communities have missed a debt payment, drawn on reserves or violated bond covenants, according to data compiled by Bloomberg. At least one assisted living facility and one nursing home operator have missed debt payments.

More than 80% of the $42 billion municipal bonds issued for senior housing have financed continuing care retirement communities, which offer independent housing, assisted living and skilled nursing on one campus. Most units at CCRC’s are for seniors who live by themselves and need less care, so the facilities have largely avoided the tens of thousands of deaths at nursing homes and assisted living facilities.

But they’re grappling with higher costs to protect patients and unable to generate revenue through new admissions. The facilities rely on a constant flow of entrance fees from new seniors who move into independent units after residents move on to higher levels of care or die.

Spending on masks, gowns, overtime and additional screening for staff has soared. Moratoriums on elective surgeries mean patients aren’t coming in from hospitals for rehab after hip or knee replacements. Seniors who want to move in can’t because the facilities are locked down to protect current residents, while fear is causing some prospects to put plans on hold.

“There’s been a lot of quote unquote headline risk in this space, obviously, given the market’s susceptibility and the relatively high mortality rate,” said Matthew Stephan, head of muni credit research at Columbia Management. “The post-Covid senior living demand picture of the next year is murky at best.”

To stay afloat, many operators have sought loans through the Payroll Protection Program under the CARES Act. The Trousdale Foundation, which borrowed $165 million in 2018 in part to acquire four communities in Ohio, Florida and Tennessee, received a $7.6 million loan, according to a bond filing. Occupancy has declined to 69% as of May 12 from 72% at the end of March.

“Our assisted and independent living census has been disrupted as many potential residents are in fear of moving into any facility in light of the spread of the virus,” Trousdale said in an April 2 bond filing. Trousdale drew $4.3 million from debt service reserve funds to make an April 1 bond payment.

These facilities in the U.S. number about 1,900, according to the National Investment Center for Seniors Housing & Care, and about 75% are operated by non-profits. By contrast, assisted living facilities and nursing homes are typically owned by for-profit companies.

The pace of municipal bond offerings for CCRC’s ramped up in the last four years as, operators, betting on a tidal wave of retiring baby boomers took advantage of record demand for higher-yielding securities to finance projects.

Even before coronavirus, the CCRC sector was among riskiest in the state and local debt market. Since incoming residents frequently need to sell their homes to move in, the projects are vulnerable to real estate downturns. Two-thirds of the facilities charge entrance fees, which averaged $335,000, according to a 2018 report by commercial real estate services firm CBRE Group Inc. Residents also pay service fees of $3,250 per month on average.

Since 2010, 80 borrowers in the municipal retirement sector have defaulted, used reserves to cover payments or violated covenants, more than any other sector according to Municipal Market Analytics. Almost half of the $35 billion in CCRC debt outstanding is unrated and almost $3 billion is distressed or in default, according to data compiled by Bloomberg.

Invesco Ltd is among the biggest investors in municipal bonds issued for retirement communities, which can carry tax-exempt coupons as high as 10%. At the end of March, almost $1.2 billion of Invesco’s $9.4 billion high-yield municipal fund was invested in the sector.

Bonds with a face of value of $385 million in the Invesco fund were classified as distressed as of March 31, including securities issued by Henry Ford Village, StoryPoint and Trousdale, according to data compiled by Bloomberg. Not all of those borrowers missed debt payments. Some violated bond covenants, such as falling short of having a certain number of days cash on hand. Most were struggling before the pandemic.

“This is a high yield sector and there are going to be communities that struggle from time to time as in all sectors,” said Mary Jane Minier, head of opportunistic credit strategy at Invesco. “You need to look at each individual community.”

Borrowers in Invesco’s portfolio have shown “incredible resilience,” in protecting residents and employees, said Minier. Some continue to accept new residents, she said.

By itself, the impact of the coronavirus is unlikely to trigger a wave of defaults among CCRC’s, said Louis Robichaux, a senior managing director at Ankura Consulting Group, who has worked on several dozen CCRC restructurings.

However, those struggling before the virus will almost certainly face additional financial stress that could result in additional defaults and restructurings. Older facilities facing more competition, and those with a larger percentage of assisted living, memory care and skilled nursing units are most at risk, he said.

“It’s not my sense there are hundreds of communities on the bubble, but there are some,” Robichaux said. “Bondholders may find themselves without many attractive options other than to negotiate the best forbearance arrangements possible, and ride this out.”