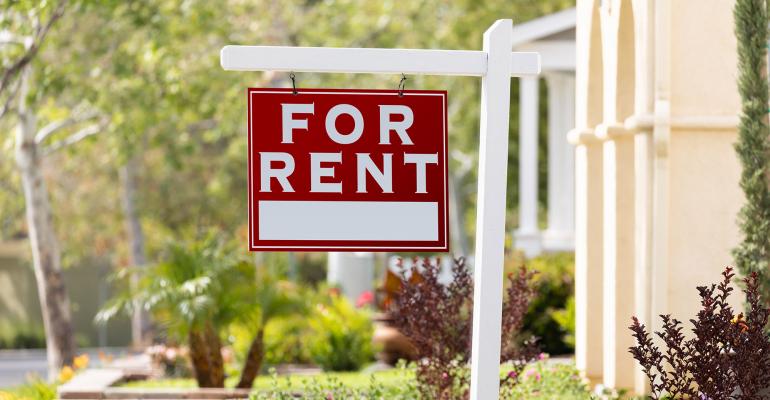 In many markets median SFR rents have risen by at least 3.0 percent this year.

"We continue to see tremendous opportunity,” said Dallas Tanner, president and CEO of Invitation Homes, an SFR REIT, in announcing the company’s results for the second quarter of 2019. “Rent growth exceeded our expectations.”

Prices on existing home are also rising, however. The S&P CoreLogic Case-Shiller U.S. National Home Price NSA Index showed annual growth of 3.4 percent in May, the most recent period for which data is available. That is making it difficult for SFR investors, including institutional buyers, to purchase new properties.

“The vast majority of single-family rentals are still owned by people who own just one or two homes,” say Don Walker, managing principal with John Burns Real Estate Consulting, which provides investors with analysis of the housing market.

Despite tumult in the stock market, the U.S. economy performed relatively well so far in 2019. That has helped keep rental houses occupied.

Properties operated by Invitation Homes were 96.5 percent occupied in the second quarter, slightly higher than the year before, according to Tanner. The rents are also rising. Same-property rents grew by 5.3 percent compared to the second quarter of 2018—a rate of growth 60 basis points higher than last year.

Rents rose the most in markets where the typical cost of a rental house was close to or slightly above the national average.

“The numbers point to upwardly mobile people looking to rent more than own,” according to Todd Teta, chief product officer with Irvine, Calif.-based data provider ATTOM Data Solutions. “The amounts they are paying in rent could easily cover the cost of owning a home in many areas of the country.”

In the meantime, institutional investors continue to make few acquisitions.

Institutional investors (entities buying at least 10 properties in a calendar year) bought just 2.2 percent of the houses and condominiums sold in the second quarter of 2019. That down from 2.4 percent a year ago, according to ATTOM. It’s also a fraction of the share of the market that institutional investors had in the peak years of 2012 and 2013, when they accounted for more than 7.0 percent of all home purchases.

For example, Invitation Homes spent $211 million to buy new rental homes in the second quarter of this year, just slightly more than the $205 million it sold. ”The company continued to execute its capital recycling plan to further enhance portfolio quality,” according to a spokesperson.

Institutional investors were more active in the Southeast, according to ATTOM’s second quarter data of metro areas with more than a million people. The markets where they accounted for the biggest share of home and condo sales included Atlanta (7.9 percent); Charlotte, N.C. (6.7 percent); Memphis, Tenn., (6.4 percent); Birmingham, Ala., (5.6 percent) and Raleigh, N.C., (5.5 percent).