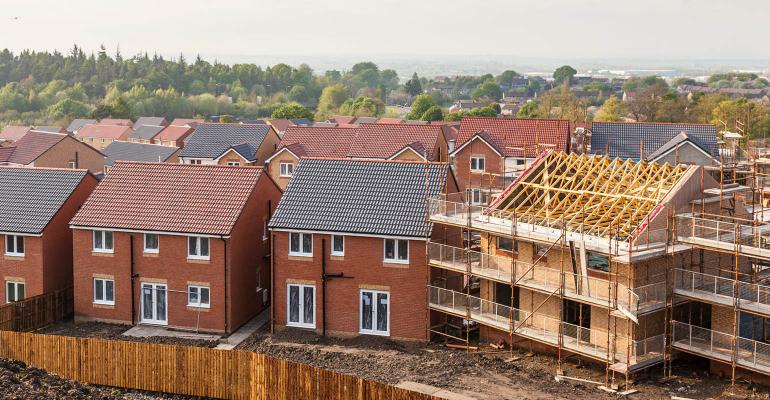 U.S. Housing Starts Increased Along with Permits in October

New single-family construction starts rose by 3.8 percent during the month.

U.S. new-home construction rose in October as single-family starts registered the strongest pace since the beginning of the year. The highest level of permits since 2007 shows healthy homebuilding ahead.

Residential starts advanced 3.8% to a 1.31 million annualized rate, in line with the median estimate in a Bloomberg survey of economists, after a revised 1.27 million pace in the prior month, according to Commerce Department figures released Tuesday. Permits, a proxy for future construction, rose 5% to a 1.46 million pace, the most since May 2007.

The starts data are in line with recent reports that indicate the housing market is improving. Lower mortgage rates are luring homebuyers who may have been on the fence, boosting optimism among developers and contributing to more construction.

Single-family home starts increased 2% to 936,000 in October, the strongest reading since January, while permits for new construction of those dwellings climbed 3.2% to a 909,000 pace that was the fastest since August 2007.

U.S. homebuilder sentiment ticked down in November after four consecutive months of gains, private data showed Monday as the outlook of builders in the South soured. The gauge remains elevated and optimism for sales over the next six months rose to the highest since May 2018.

Groundbreakings for the multifamily category, which tends to be volatile and includes apartment buildings and condominiums, increased 8.6% while permits rose 8.2%.

Data out later this week is forecast to show existing home sales, which make up the vast majority of home transactions in the U.S., increased in October from the prior month in a sign that the housing market continues apace. Also, new-home sales, which comprise about 10% of sales but are a timelier indicator, remained close to an almost 12-year high.

Three of four regions posted an increase in starts last month, led by a 17.6% surge in the West to the fastest pace since March 2018. Starts also rose in the Midwest and South.

About 181,000 homes were authorized but not yet started, the most since March and indicating a growing backlog for builders.

The report, produced jointly by the U.S. Census Bureau and the Department of Housing and Urban Development, has a wide margin of error.

To contact the reporter on this story: Katia Dmitrieva in Washington at [email protected]