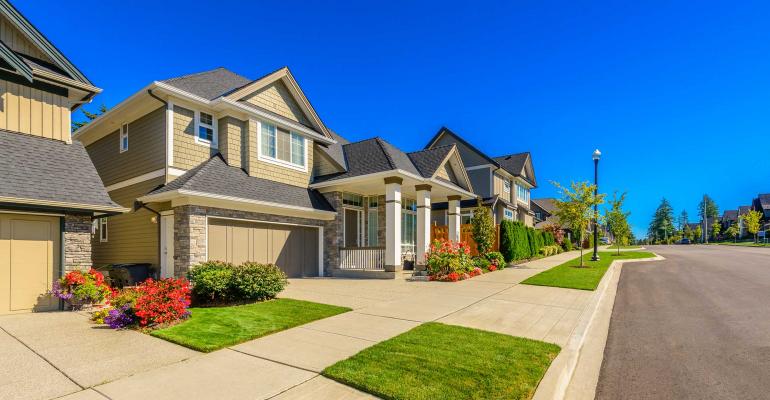 (Bloomberg)—Wall Street won big buying up homes during the foreclosure crisis and renting them out. Now, it’s headed back to the suburbs in hopes of scoring again.

With the pandemic driving demand for larger living spaces, institutional investors are pouring money into single-family rentals. In addition to buying houses on the open market, they’re bankrolling subdivisions -- inventing a new kind of suburban living that’s easier to afford, but where the financial benefits of homeownership go to Wall Street firms.

“It’s been a combination of the sector coming of age as well as the performance during the pandemic,” said Dana Hamilton, head of real estate at Pretium, whose Progress Residential manages roughly 40,000 rental homes. “Single-family rentals have been an island of strength during the storm.”

For decades, Americans have flocked to the suburbs in search of more space, better schools and a respite from the grind of city life. Those qualities have become more relevant in the era of Covid-19 and unrest in U.S. cities that has President Donald Trump promising to defend the suburban lifestyle.

Whether landlords are shopping for existing homes or building them from the ground up, they want the same things that families have always favored. That means spare bedrooms, big garages and good neighborhoods.

On a September morning, several work crews were busy at one of American Homes 4 Rent’s new communities in Lake Stevens, Washington, about 35 miles (56 kilometers) northeast of Seattle. Rent is about $2,700 a month for a four-bedroom home with a fenced-in backyard in the 27-house development, which snakes down a street that ends in a roundabout backing up to a wooded area and an elementary school.

There’s little to distinguish the neighborhood from several others nearby developed by traditional homebuilders, and tenants are moving in just about as fast as the houses can be finished.

American Homes, founded in 2012 by the self-storage billionaire B. Wayne Hughes, spent its early years building property-management systems to operate homes acquired in the aftermath of the foreclosure crisis.

After rising home prices made it harder for the company to score bargains, it decided to start building rental houses for itself. These days, it’s opening new communities at a pace of roughly one per week, chief executive officer David Singelyn said in an interview.

Christopher Bernard, 34, signed a lease on a new American Homes property in Eagle Mountain, Utah, about 40 miles south of Salt Lake City, after he and his wife couldn’t close on a newly built home in the area. The rental house has nicer finishes, and costs less per month than what they would have paid on a mortgage.

“Someone who owns their house isn’t any different from someone who’s renting,” said Bernard, who teaches at a nearby university. “I’m proud because I can let my child run around on the lawn.”

American Homes, which raised $625 million through a joint-venture with JPMorgan’s asset-management arm, isn’t the only company betting on purpose-built rentals. Amherst Group, another early industry player, hired a former construction executive as chief operating officer this summer with an eye to buying land and building its own homes. A former Colony Capital Inc. executive is raising $1.2 billion in equity and debt to build 5,000 rental homes.

It won’t be easy for institutional landlords to remake the suburbs. Competition for construction workers, building materials and land could hold back rental developers, while low mortgage rates are helping boost home prices, making it harder to buy properties to convert for tenants.

Mom-and-pop landlords still own the vast majority of single-family rentals, with large investors controlling roughly 2% of all rental homes, according to John Burns Real Estate Consulting.

Still, the industry has become a popular way for Wall Street to capitalize on the surging demand for housing, particularly as millennials look for more space and struggle to find homes they can afford to buy.

“If you take a step back, there’s not enough homes, and not enough affordable housing,” said Drew Flahive, who leads Amherst’s single-family rental business. “Our main focus with this business is creating supply that’s in such high demand.”