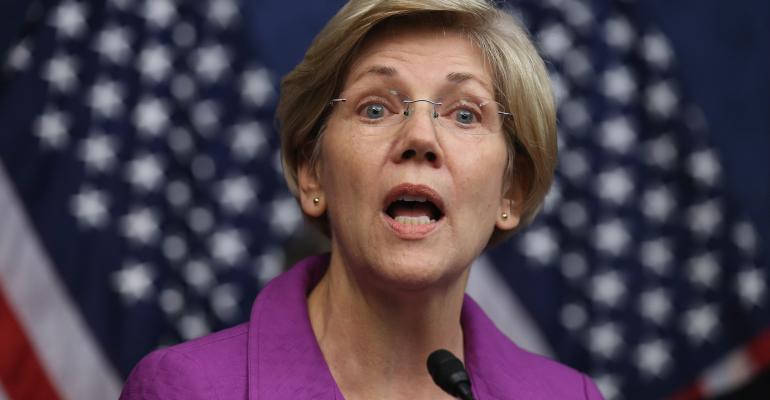 Warren Calls Out Blackstone for ‘Shameless’ Profits from Housing

(Bloomberg)—Elizabeth Warren called out Blackstone Group Inc. for its real estate practices as she laid out her tenants’ rights plan, accusing the company of “shamelessly” profiting from the 2008 housing crisis.

Her criticism on Monday was the latest instance of the Democratic 2020 presidential candidate singling out Wall Street companies and investors by name for actions she says contribute to inequality.

In a Medium post where she laid out proposals to strengthen tenants’ rights, Warren assailed Blackstone for going on a “shopping spree” in the wake of the 2008 crisis and buying apartments and single-family homes that had been foreclosed. She also took aim at Colony Capital Inc. and Cerberus Capital Management.

“Some of the same Wall Street firms that tanked the dream of home ownership for millions of American families are now the country’s biggest landlords - profiting off the destruction they caused,” Warren wrote in her post.

“Though we are only a tiny percentage of the housing market, we are proud of our investments, which are helping address the housing shortage by adding high-quality, professionally managed rental housing, while contributing to local economies and creating jobs—all on behalf of our investors, which include retirement systems for millions of teachers, nurses, firefighters and other pensioners,” said Jen Friedman, senior vice president for global public affairs at Blackstone.

Blackstone is one of the world’s largest real-estate investors, and has about $554 billion in total assets under management. The business is so profitable it has made both founder Stephen Schwarzman and president Jonathan Gray, who oversaw Blackstone’s massive real estate growth, billionaires several times over.

In 2012, the firm was racing to acquire single-family homes, spending as much as $150 million a week.

Warren has singled out some of the largest U.S. corporations, including Facebook Inc., Exxon Mobil Corp., Walmart Inc., and Wells Fargo & Co., as she campaigns for the Democratic nomination by championing working- and middle-class families. She’s promised to break up big corporations, crack down on their political influence and enforce strict regulations on Wall Street.

She has also engaged in fights with such Wall Street figures as Lloyd Blankfein and Leon Cooperman.

Warren’s latest attack comes in a policy proposal to withhold federal funding from corporate landlords with a history of “harassing” tenants. Corporate landlords would be required to publicly disclose data like median rent, the number of tenants they’ve evicted and building code violations, as well as the names of any individuals with an ownership interest of 25% or more.

Warren also pointed to Blackstone’s $5.3 billion deal to buy New York’s Stuyvesant Town, an 80-acre Manhattan development with more than 11,000 apartments. Under the terms of the deal, about 5,000 of those apartments would remain “affordable” for 20 years, according to an announcement by New York City Mayor Bill De Blasio.

Warren has proposed spending $500 billion to build about 3 million housing units in the U.S., and also said her administration would provide a nationwide right-to-counsel and establish a federal grant program aimed at benefiting low-income tenants facing eviction. She said she’d create a federal Tenant Protection Bureau, modeled after the Consumer Financial Protection Bureau, a key component of the 2010 Wall Street overhaul legislation that she advocated.

To contact the editors responsible for this story: Wendy Benjaminson at wbenjaminson@bloomberg.net