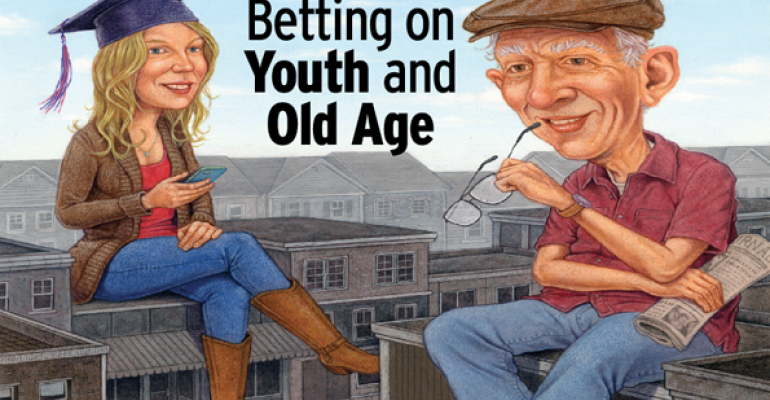 At a time when real estate investors still have concerns about the future performance of many traditional property types, including office, retail and multifamily, some have started to set aside capital for alternative assets. Such assets, including student housing, seniors housing and medical office buildings, among others, have broad demographic trends supporting their success, proved immune to the recession and offer higher yields than comparable properties in other sectors. As a result, interest in these types of assets is expected to keep growing.

Immediately after the downturn, active investors stuck primarily with the five core property types because they were wary of taking on any level of risk, notes Spencer Levy, executive managing director with CBRE Capital Markets. Yet the cap rates on the best multifamily, office and retail buildings have fallen so low lately that it has become difficult to achieve decent yields. At the same time, investors ranging from REITs to pension fund advisors to private equity groups still have to fulfill their capital allocations to commercial real estate, which is why they are increasingly eager to acquire more specialized properties.

In the week before Spencer Levy was interviewed for this article, for example, he had conversations with multiple clients, including some pension fund advisors, who were in the process of putting together investment vehicles targeting alternative real estate assets. Similarly, Richard Putnam, managing director with the capital markets group at Colliers International, reports meeting with various foreign investors, primarily from Asia and Europe, who are very bullish on the U.S. student housing sector.

Over the past 24 months, Tokyo-based Mitsubishi and Frankfurt-based RECAP ranked among the top five buyers of student apartments in the U.S., according to data from Real Capital Analytics (RCA), a New York City–based research firm.

“There is a significant amount of interest in some of those niche property sectors,” says Dan Fasulo, managing director with RCA. “[They] are considered very safe and anything that gets to market gets scooped up.”

There are reports that Kayne Anderson Real Estate Advisors, the real estate arm of private equity firm Kayne Anderson Capital Advisors, has launched an opportunistic fund aimed at raising $700 million for investments in off-campus student housing properties in the United States. The fund is expected to close in May.

And this is only the beginning, according to Putnam.

“Over the past 10 years, as all real estate has become more institutionally accepted, strategies have been developed to essentially gain alpha—outperformance on the fund side or REIT performance side from the standpoint of both current income and long-term growth,” he notes. “We are seeing strategies being developed on the institutional level that specifically target medical office, seniors housing and student housing. It’s a very solid, very long-term trend that’s still in the early innings.”

Demographics are playing a huge part in investors’ decisions to pursue such specialized properties as seniors housing, student housing and medical offices. The market is being driven by the 78 million baby boomers who are nearing retirement age and the 80 million “echo boomers,” many of whom are entering their college years.

The lackluster jobs market makes it only more likely that these young people will opt to stay on for graduate school, creating further demand for student housing, according to David Gilbert, chief investment officer with Clarion Partners, a real estate investment management firm. And at the current moment, at least, there is a definite shortage of supply in the sector.

For example, Michael Gallis & Associates, a Charlotte, N.C.–based strategic planning firm, estimates that even as developers deliver new space to the market, over the next 10 years there will likely remain a 1.5 million to 2.15 million shortage in student housing beds at four-year universities around the country.

“There are a lot of things about this particular sub-sector of multifamily” that are attractive, says Ted W. Rollins, CEO of REIT Campus Crest Communities Inc. In February, Campus Crest began a staged acquisition of its competitor Copper Beech Townhome Communities LLC, paying $230 million in cash and taking on a $31.8 million loan in exchange for a 48 percent interest in 35 student housing properties. “It’s recession resistant and it’s a very stable asset class that grows consistently. Even through 2008 and 2009, these assets continued to perform well. And it’s a growing industry—the percentage of students graduating from college is increasing, the average stay at college is increasing and there is a consistent increase in foreign enrollment.”

Meanwhile, the National Investment Center for the Seniors Housing & Care Industry estimates that the number of people 75 and older (those most likely to need seniors housing) will grow at a rate of approximately 2.1 percent annually during the next decade and intensify significantly between 2021 and 2039. Between 2021 and 2025, for example, the population of those aged 75 and older will increase cumulatively by 22.8 percent.

When combined with the Patient Protection and Affordable Care Act taking effect, the aging baby boomers will drive demand not only for seniors housing but also for medical office facilities, according to Robert Bach, national director of market analytics with Newmark Grubb Knight Frank. Recent improvements in biomedical sciences have turned many previously fatal illnesses into manageable chronic conditions, he notes, creating the need for more outpatient medical facilities.

“There is going to be a lot more demand for medical office space,” Carlson says. “Investors are very active in not only buying and selling [available properties], but they are even going to existing hospitals and asking if they are willing to sell.”

In addition to strong underlying fundamentals, medical office properties tend to have less tenant turnover than other types of commercial real estate, minimizing the headaches for owners. Because doctors, dentists and other medical professionals spend a lot of money to outfit their offices with the proper equipment and rely on their locations for customer traffic, they tend to stay where they are for the long haul, notes RCA’s Fasulo.

“Once your tenants invest in their own space, it’s very expensive for [them] to move out,” he says. “Medical office was the only sector where properties were transacting throughout the downturn because investors felt it was safe.”

In spite of all the advantages the student housing, seniors housing and medical office sectors offer, they can still be purchased at very attractive cap rates, says Colliers’ Putnam. He notes, for example, that medical office buildings tend to be safer bets than traditional suburban office parks but sell at a cap rate about 25 basis points higher than a well-leased class-A suburban office building.

“I think the reason for that paradox is there is just less liquidity in the medical office sector, because that investment market is still in the early stages of development and you have [fewer] investors,” Putnam says. “So for any given property, there is an increment of lesser liquidity.”

Combined with projections of long-term demand, these kinds of valuations allow investors to achieve very attractive yields. Plus, when it comes to student housing and medical office properties, there is less emphasis on the assets being located in or near major urban centers, meaning it’s possible to find great opportunities in secondary and even tertiary markets, where the cap rates are likely to be lower overall.

Campus Crest’s Rollins notes that when it comes to new developments, the going in unleveraged rate of return for the REIT is roughly 7.5 percent. As the property stabilizes, the returns move into the 8-percent range.

According to a study put together last year by Clarion Partners, investments in student housing properties can deliver unleveraged returns in the 7-percent to 9-percent range.

Meanwhile, the healthcare REITs included in NAREIT’s Investment Performance Index delivered total returns of 20.35 percent for the whole of 2012, compared to returns of 14.15 percent for office REITs and 6.93 percent for apartment REITs.

“The underwriting metrics for a few of these property types, including medical office and student housing, are entirely different than for core property types,” says Clarion Partners’ David Gilbert. “You can find a fantastic student housing opportunity adjacent to a campus that’s very distant from a major metro center. Even in a relatively small, slow-growing area, you can find a fantastic investment because the asset is dominant in its region. It can preclude any competition.”

As with any investment, there are some drawbacks to pursuing alternative real estate assets, as well as some significant advantages. Although most industry insiders dismiss the idea that these specialized properties are more

management-intensive—Gilbert, for one, notes that the most complicated asset in the commercial real estate universe is the regional mall—student housing requires greater capital reserves than do traditional apartment buildings because the tenants are essentially teenagers who are more likely to damage property and are prone to move out on an annual basis.

And with seniors housing, “you are relying, to some extent, on government regulations,” says Dan Fasulo. “I think both seniors housing and student housing have been maybe put on too high of a pedestal, given some of the risks I see.”

The larger issue with student housing, seniors housing and medical office buildings is that there may simply not be enough acquisition opportunities in the market today for diversified investors such as pension funds and private equity firms because the public REITs are dominating these sectors, notes Gilbert. For example, over the past two years, publicly traded American Campus Communities bought a whopping $2 billion worth of student housing properties, while Kayne Anderson, the most active private buyer, invested only $388 million.

Similarly, HCP Inc. and Health Care REIT have dominated the seniors housing sector in the past two years, with a combined $2.6 billion in acquisitions.

“The market is limited,” says Colliers’ Putnam. “When you have only 10 percent of product trading in medical office, student housing and seniors housing compared to traditional properties, there are just [fewer] opportunities in these alternative sectors. Portfolio trades have been dominated by specialists in those businesses who have the economies of scale to take advantage of the smaller opportunities as well. It’s a challenge for a traditional investor to get into these non-traditional product types because they are a little bit on the outside looking in from both an operational standpoint, as well as access to deals.”

Plus, the smaller pool of potential buyers for these properties means they are less liquid than a run-of-the-mill office building, shopping center or warehouse. That’s not necessarily a reason to avoid them, but investors should know how they will dispose of an asset before they put their money on the table, says Robert Bach. “You just have to have your exit strategy in mind—who would you sell it to?”