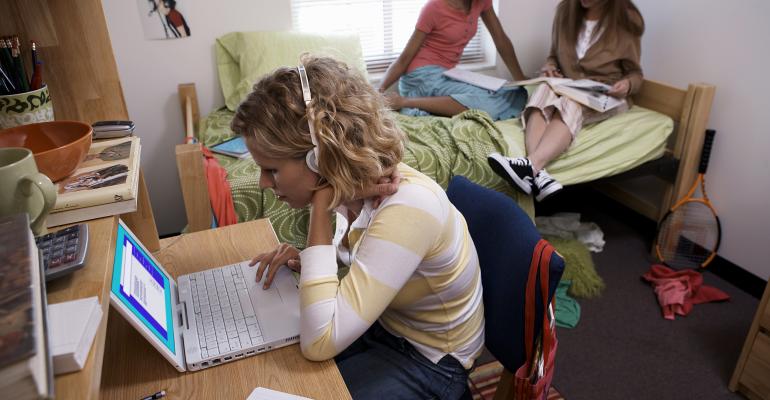 In many cases, new properties close to campus are drawing students away from properties farther out.

Student housing properties are taking a little longer to pre-lease this year.

In many cases, new properties close to campus are drawing students away from properties farther out. However, overall rents continue to rise and most properties are on track to be fully-occupied by the start to the school year.

“Oversaturation is more to blame than demand in most markets, and many will rebound as development activity moderates,” says Taylor Gunn, director of student housing for Axiometrics, a RealPage company based in Richardson, Texas.

All the new student housing beds developers have planned are finally beginning to weigh on the market. The percentage of student housing beds that were pre-leased for the school year beginning in the fall of 2018 was just 74.4 percent in May, according to Axiometrics. That’s nearly a percentage point below the pre-leasing rate at the same time last year, when 75.1 percent of beds had pre-leased for the fall.

The pre-leasing season had started strong but slowed in late spring. “The impact of potential supply and demand imbalances didn’t start to show in the leasing numbers until April, when the pre-lease fell 147 basis points from last year,” says Gunn.

Properties close to campus at still leasing well, even though that’s where most of the new construction has been happening in recent years. On average, properties located less than a half mile away from campus were 77.2 percent leased in May. That’s up 66 basis points from last year. Properties located between a half mile and a mile from campus are leasing more slowly—the percentage of pre-leased bed there was 200 basis points lower than the year before. At properties more than a mile away from campus, the pre-leased percentage was 360 basis points lower, according to Axiometrics.

But rents are still growing at most properties. Only about a quarter (26 percent) of same-store properties have cut their rents, in spite of lower leasing velocity. “Relatively few properties are dropping rents to fill beds,” says Gunn.

Once again, the properties closest to campus are doing better. “These properties are seeing stable rent growth, which has averaged around 1.5 percent throughout this leasing season,” says Gunn. That performance is similar to prior years.

The outlook is strong for 2019 and beyond, as developers plan to build fewer new beds. "Recent reductions of new deliveries to volumes at about half of the bullish years of 2013 and 2014 demonstrate market prudence and portend well," says Pierce.

Developers will finish a total of 47,000 new beds at off-campus student housing projects for the fall of 2018. Construction is also starting on 30,900 beds for the fall of 2019, with 10,000 additional beds identified but not started, according to Axiometrics.

Demand for student housing remains strong, even as the economy approaches full employment, luring some potential students away from school and into the workforce.

"Admissions demand remains incredibly high at America’s top public universities, which translates into strong and often growing demand for students housing," says Pierce. College enrollment grew by an average of 0.7 percent over the fall 2016 semester among the 175 universities studied by Axiometrics. That’s down from an average rate of growth of 1.3 percent in each of the previous three years.