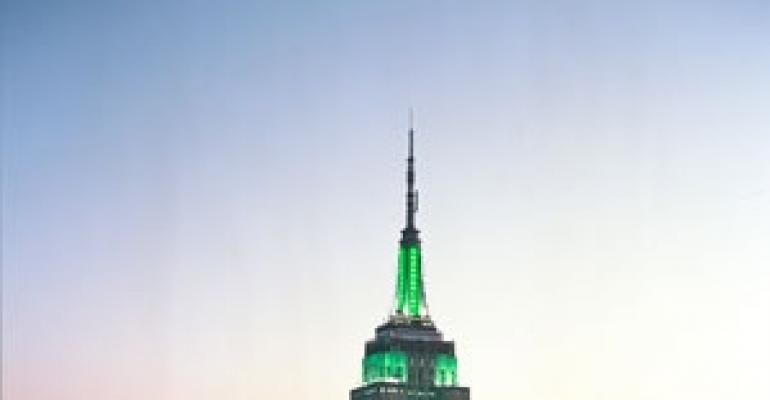 It has been a year since the bulk of a massive energy-efficiency retrofit project was finished at the Empire State Building and owners, planners and experts have had high hopes for a big payoff.

They have not been disappointed.

When the numbers rolled in for 2011, it turned out the building reduced energy usage by better than what everyone hoped: They were 55 percent of the way to their ultimate goal of a 38 percent reduction in energy use. That’s 5 percent closer than they had projected.

Savings rang in at $2.4 million and return on investment for the $20 million project is still on track for just about three years. The world’s most iconic office building is now arguably one the greenest historic buildings in the U.S. It achieved Energy Star status in 2010 and LEED Gold in 2011.

“We have a proven model that shows building owners and operators how to cut costs and improve the value of their buildings by integrating energy efficiency into building upgrades,” Anthony Malkin, owner of the Empire State Building, said in a statement.

Malkin and the Clinton Climate Initiative Cities program created the team that is working on the project, including Johnson Controls Inc., Jones Lang LaSalle and the Rocky Mountain Institute.

It may seem counter-intuitive that a building erected 81 years ago can serve as model for cutting-edge energy efficiency.

“The whole message is that very historic buildings actually have a lot of attributes that make them fantastic candidates for energy performance,” says Dana Robbins Schneider, vice president of energy and sustainability for Jones Lang LaSalle, the project manager.

Because the Empire State Building was built before air conditioning, it is designed for natural ventilation. The building’s steel and limestone allow it to absorb the cool night air and then release it during summer days, Schneider says.

None of the retrofit work involved the building’s façade or the appearance of the lobby, so Schneider says the building’s status as a historic landmark didn’t thwart any possible environmental upgrade.

At Chicago’s Union Station, for instance, a project to upgrade lighting has had great success. The project cost about $1.5 million and is saving about $336,000 annually with ROIs ranging from three to six years.

As part of the retrofit project at the Empire State Building , the building received about $1 million in incentive funds—the maximum allowed—from the New York State Energy Research and Development Authority. Schneider says incentives were welcome, but energy savings were the driving force.

The retrofit project included eight measures, five of which were finished as of May of 2011. They include a project to add insulation behind radiators, a retrofit that gutted existing electric chillers to make them more energy efficient, a Web-based tenant energy management system that allows tenants to see how much energy they use in real time and compare their use to the building’s energy hogs and energy misers and an innovative window project where all 6,514 windows were retrofitted for energy efficiency—a process that reused 96 percent of the material. Each window was removed and then, at an in-building shop, retrofitted by adding energy-saving film and gas between panes. The improvements boosted energy efficiency from a so-called R2 rating (almost near the bottom) to R8 (close to the ceiling of R11.) Schneider notes that new windows would have cost about 70 percent more than the retrofit project.

The final three measures yet to be completed are projects that have to be done within tenant space as lessees roll over.

“By the end of the year we should be close to 20 to 25 percent of the tenant space being done,” says Schneider. “The projections for total completion are between ten and 15 years.”

Those projects in tenant space will be to upgrade lighting and HVAC systems as well as upgrades to what’s known as the plug load systems. It essentially works so a tenant’s equipment—printers, computers, refrigerators—suck up less energy when not actively in use.

“It’s like an occupancy sensor for lights so they go off when you’re not in the room,” Schneider says.

The energy-efficiency measures, along with other improvements, have attracted new tenants, such as LinkedIn, Skanska, Li & Fung, Coty Inc. and the FDIC, who signed on to the Empire State Building in 2010 and 2011.

“Our work at the Empire State Building demonstrates that a major reduction in energy usage can be cost-effective in terms of energy savings and can enhance a building’s appeal to high-quality tenants,” Ray Quartararo, international director at Jones Lang LaSalle said in a statement.

“As we continue to work with new and existing tenants," he added, "we find that the overwhelming majority of people want to do their part to reduce energy usage while delivering economic returns and occupying an environmentally responsible building.”