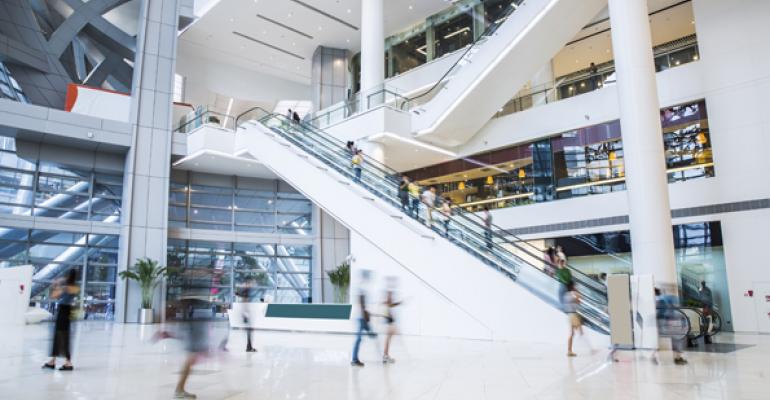 As struggling retailers seek to streamline their brick-and-mortar portfolios, massive store closings continue. But with anchor tenants that open mall owners to the risk of defaulting on their CMBS loans, store closures present even more of a challenge. The current wave of closings in the department store sector, for example, may put lesser quality malls at substantial risk.

We spoke with Edward Dittmer, vice president of CMBS at Morningstar Credit Ratings, to shed more light on the firm’s findings and their significance for mall owners and retail investors.

NREI: Morningstar recently released data reporting that J.C. Penney’s announced store closures are tied to approximately $7.29 billion in CMBS debt, and that, “In total, CMBS exposure to J.C. Penney as an anchor or as a shadow anchor tenant near the actual collateral totals $29.82 billion,” when taking into account locations experiencing below-average tenant sales and facing further closure risks. Which malls are most at risk?

Edward Dittmer: We are most concerned about class-B malls, particularly those in secondary and tertiary markets. When anchors close in these malls, it can be difficult to find tenants to backfill the space. In addition, we highlighted some malls that had low sales per square foot. When a mall has lower sales productivity, that is an indicator of lower traffic. This may be a factor when the mall tries to identify replacement tenants.

NREI: How could these anchor closings affect those malls?

Edward Dittmer: There are several ways an anchor closure can affect a mall. Because anchor tenant leases can have relatively low rents per square foot, the direct revenue impact can be relatively low. However, the longer the anchor box stays vacant, the higher the risk that inline tenants will begin to vacate. In addition, the loss of the anchor can affect the public’s perception of a property. A negative perception of a mall may reduce traffic to the mall as consumers seek out more vibrant malls.

NREI: Are there any expanding retail tenants out there who could potentially pick up some of those spaces?

Edward Dittmer: We have seen a number of retailers take over vacant anchor spaces. There are grocery stores such as Whole Foods that have taken over spaces. Dick’s Sporting Goods has moved into a number of malls, as have entertainment tenants like Round 1 Bowling or Legoland Discovery Center. In addition, we often see non-retail uses by outpatient health clinics and even office tenants that have reconfigured the stores for their use. It has been a very mixed bag.

NREI: What about co-tenancy clauses? How could those come into play in this situation?

Edward Dittmer: Co-tenancy clauses usually require more than one anchor to close. The mall owner also has a “cure period” that allows some time to fill the space with an acceptable tenant. Once a tenant is able to invoke a co-tenancy clause, the terms often allow the tenant to unilaterally reduce its rent or to terminate the lease.

Of course, if a tenant’s lease is expiring in the next year or so, it can simply close the store once the lease ends. Lease terms are usually five to 10 years so tenants may keep a store open as long as it’s not unprofitable, and then close or try to renegotiate the lease terms at the first opportunity. This is often the route that a tenant takes in these cases.

NREI: If the co-tenancy clauses start coming into play, do you think we are more likely to see co-tenants switching to lower rent or leaving altogether?

Edward Dittmer: If co-tenancy clauses come into effect, tenants that have struggling stores certainly may use them to lower their rent or terminate their leases. Most tenants with these clauses are national retailers that will review the store’s performance and decide whether it is in the company’s best interest to exercise it. A tenant that has stable sales may elect to remain in place.

NREI: You’ve also found cases in which J.C Penney stores are located in the same mall properties where there are Sears or Macy’s closings. Please describe this dataset and its significance.

Edward Dittmer: With the closures that have been announced and are likely to be announced in the future, we expect to see some malls that lose multiple anchors. The loss of multiple anchors can certainly accelerate the decline of a mall. You will see more co-tenancy come into effect. However, you also have a more pronounced negative public perception surrounding a mall. That can reduce traffic to the property and, consequently, reduce sales productivity for the inline tenants.

NREI: You’ve said there is a possibility that in some cases, owners may end up returning malls to their lenders. In which situations is that most likely to happen?

Edward Dittmer: It comes down to a mall owner’s determination as to whether it will see a positive return on any additional cash that it must invest to keep a mall afloat. If the cash flow at a particular property drops below the debt service payment, the owner has to decide whether or not to fund the shortfall. In some cases, the owner may believe that cash flow can recover. In that case, it may invest the additional cash. In other cases, it determines that the mall will not recover and will allow the loan to default.

The same analysis takes place at maturity. If the property value has decreased and a new lender requires more cash equity in order to refinance the loan, the mall owner may decide that the additional funds to pay off the existing debt can be better spent elsewhere. At that point the owner will allow the loan to default.

NREI: What might the lenders do once they are in possession of the property?

Edward Dittmer: The special servicer will try and maximize the recovery, either by leasing the property or by selling the note to a distressed debt investor. So the servicer will hire a property manager to run the mall and work on determining what the value of the property is at that time.

Unfortunately, more often than not, we see that servicers are unable to lease the properties up to any significant degree and the malls continue to lose tenants. The longer the mall remains with the servicer, we have observed that losses to the bondholders increase significantly. In fact, most malls will have a loss severity above 50 percent, with many that are over 75 percent. In a few cases, the bondholders have taken more than a 100 percent loss once the property is liquidated.

NREI: Would anyone be interested in acquiring these distressed assets?

Edward Dittmer: There is a very small number of investors buying distressed malls. Sometimes they are local investors that believe they can find some positive use for the space. Other buyers are interested in acquiring the malls at very deep discounts with a long-term plan to try and redevelop the land.

NREI: If there are parties who may be interested in picking up these assets, what kinds of discounts would they expect?

Edward Dittmer: Here are a couple of examples of heavy distress. St. Louis Mills sold this past year for $4.4 million. In 2007, the property was appraised for $142 million. Pittsburgh Mills, which has not yet been liquidated, recently appraised for $11 million. This is down from an appraisal of $190 million at issuance.

NREI: What’s your outlook for those of these malls that will go back to the lenders—are they salvageable as retail properties or will they need to be redeveloped into something else?

Edward Dittmer: Some might be salvageable. In a few cases, we see malls that have 80 percent occupancy get transitioned back to the lender. These may be situations where the malls can continue to function, just at a lower level of cash flow. Some have been repurposed as retail power centers, where the enclosed mall concept is abandoned but the property can continue as an open-air center.

Other properties may have to be redeveloped for mixed-use, as a pure retail play may no longer be viable.

NREI: What would be an example of the amount of turnaround costs needed to be spent by an investor who might be interested in acquiring one of these spaces?

Edward Dittmer: It would depend on what they plan to do with the property. With St. Louis Mills, the [property] may have to be demolished and the area completely redeveloped. Other malls may require less work in order to repurpose the asset.