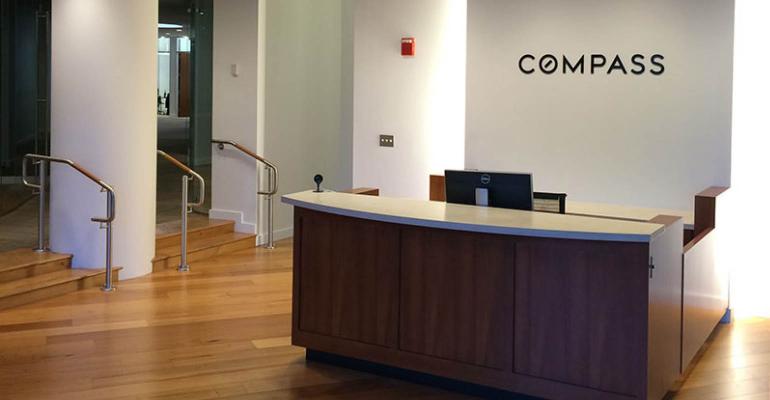 Ori Allon, co-founder and executive chairman of Compass, said the company will use part of the $100 million from its new funding round to invest more in research and development.

(Bloomberg)—A New York startup called Compass is persuading investors that it can reshape the home-buying process through the use of technology. A dashboard showing neighborhood data and a Pinterest-like app for organizing home listings would make real-estate agents more productive and therefore, more profitable, the company says. The pitch caught the attention of Fidelity Investments, which made a rare bet on a private company, valuing the business at $1.8 billion, Compass said on Wednesday.

To others, though, Compass looks more like a traditional realty broker. It employs more than 2,000 agents, who take a percentage of the selling price and gives 15 percent to 30 percent to Compass. It lures the industry’s top talent with lavish signing bonuses and specializes in high-margin, luxury homes in upscale, coastal markets. The much-touted technology is, according to several agents, not that different from what other brokers provide.

Vera Nelson, a California real-estate agent of 17 years who joined Compass in 2015 from Coldwell Banker, said Compass recruiters enticed her with the promise of transformative technology and generous commissions. Compass has said agents see a 25 percent increase in earnings during their first year. But Nelson left dissatisfied less than a year later and returned to Coldwell. “The technology was mostly marketing tools,” she said. “It was sleek, but I can’t say it was different from anything else out there.”

Ori Allon, co-founder and executive chairman of Compass, said the company will use part of the $100 million from the new funding round to invest more in research and development. About a quarter of the company’s 500 employees work in software development and design, he said. Allon brushed off criticism about Compass’s technology and questions about the lofty valuation. “I don’t listen to that,” he said.

Allon left a gig at Twitter Inc. to start Compass in 2012. His co-founder, Robert Reffkin, was a Goldman Sachs Group Inc. chief of staff to Gary Cohn, now the chief economic adviser to President Donald Trump. By 2016, venture capitalists declared Compass a tech unicorn, with a valuation of $1 billion. The company has taken a total of $325 million in funding. Investors include Wellington Management, IVP, Peter Thiel’s Founders Fund and Joshua Kushner’s Thrive Capital.

Compass generated $188 million in revenue last year, and Allon estimated it will hit $400 million this year. The company is almost certainly unprofitable, but Allon declined to say. Redfin Corp., a real-estate broker that went public in July, is expected to generate $365 million in sales this year, according to analyst estimates compiled by Bloomberg. Redfin’s market value is $1.87 billion, and it has yet to turn a profit. “Real-estate brokerages have been in a profitability crisis for 20 years, and it’s become more acute over time,” said Brian Boero, chief executive officer of real-estate consulting firm 1000watt.

The vote of confidence from Fidelity is noteworthy. Like other mutual fund managers, Fidelity has been reducing the number of investments in late-stage startups. Compass was the 11th for Fidelity this year, half the amount from 2015, according to data from research firm CB Insights.

Allon said Compass had $100 million in the bank before the latest investment but took the cash to pursue more aggressive growth. Compass plans to double the number of agents to 4,000 in the next 18 months and expand to 40 offices from 30, he said.

Todd Chaffee, a general partner at IVP and Compass board member, said he evaluated competing real-estate platforms when his VC firm first invested in 2015 and found they fell short of what Compass had developed. He said the caliber of developers at Compass was more like a tech company’s than a realty firm. “The simple reality is that Compass agents can perform key tasks (like generating comps for their clients) in a few seconds when it used to take them a couple of days,” he wrote in an email.

Compass software allows agents to see property assessments, school quality and other public data inside the Compass system. Agents can also use the company’s tools to assemble collections of properties to discuss with clients and book appointments with sellers. There are also market analysis and data tools for evaluating home prices. Maëlle Gavet, the chief operating officer, said Compass’s primary focus is “to glue all these tools together” in a Salesforce.com Inc.-type system. She said the first results of this effort will roll out by the end of the year but that it’ll take several years to deliver on the full vision.

Questions linger about Compass’s technology. Alex Venditti, a Washington area realtor, left Sotheby’s to join Compass as a senior vice president in 2015. But once he got inside, he said the data Compass showed him was misleading. The company demonstrated that its system was able to locate dozens more homes in Manhattan than the leading real-estate service, called MLS. In practice, he found that Compass was no better in Washington than MLS, he said. Venditti left last year to join another broker.