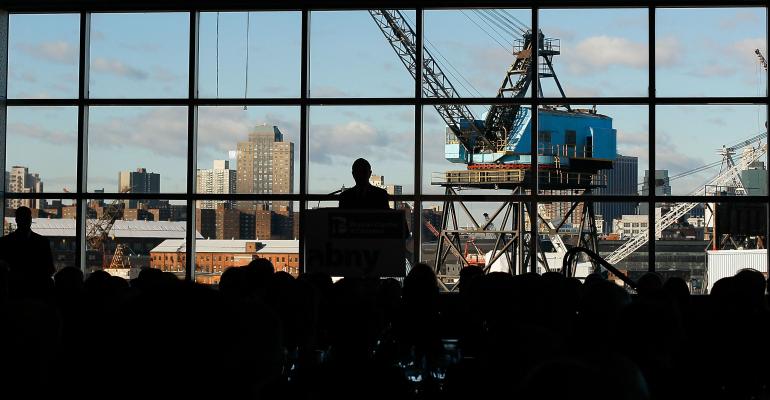 The new building plan is for 5.1 million more sq. ft. A little more than half of it will be in a single complex with about the total square footage of the Empire State Building.

(Bloomberg)—America may never recover its glory as a manufacturing powerhouse, but the Brooklyn Navy Yard is doing what it can, transforming itself from a 20th-century warship builder to a 21st-century high-tech hub.

Now it’s about to unveil a $2.5 billion building plan that would more than quadruple its current workforce.

The navy yard’s ongoing expansion -- which includes the reconstruction of Admiral’s Row, where naval officers once lived, and the creation of a waterfront office building that the co-working startup WeWork Cos. helped design -- should raise the job count to about 20,000, from the current 7,000, according to the Brooklyn Navy Yard Development Corp.

The new building plan is for 5.1 million more square feet (474,000 square meters). A little more than half of it will be in a single, vast complex with about the total square footage of the Empire State Building, bringing the yard’s total workforce to about 30,000.

The expansion would allow for startups to design and test products while giving them space to grow when they go to full production. The city has had trouble holding on to creative manufacturers once they become successful, said David Ehrenberg, president and chief executive officer of the development corporation, a not-for-profit that manages and develops the property on behalf of the yard’s owner, New York City.

It’s a far cry from the yard’s shipbuilding peak during World War II, when about 70,000 people worked at the site -- and a long way from the blue-collar culture of the borough’s wartime years. Nearby Williamsburg and Dumbo have become magnets for affluent millennials in tech and media.

The navy yard has sought a balance of creative types and traditional working-class Americans at the site where the U.S.S. Arizona was launched. A representative employer there is Steiner Studios, a Hollywood-style film lot where about 60 percent of the jobs are for carpenters, woodworkers and other people who work with their hands. And the yard has thrived.

“When we started here, it was a bombed-out mess,” Douglas Steiner, chairman, said of the studio’s birth in 2004, when the surrounding neighborhoods were just starting to be gentrified. Steiner is celebrating Academy Award nominations for “The Post” and “The Greatest Showman,” parts of which were shot at the studio, along with TV shows such as “The Deuce” and “Girls.”

“Now everybody wants to be here,” he said.

Clare Newman, chief of staff and executive vice president of the development corporation, pointed to the yard’s track record.

“We’ve reached a point where we have really finished rehabbing all of the existing buildings at the yard, and we’ve been over 99 percent leased for the past decade,” Newman said. “So there’s clearly demand out there, and we want to make sure we’re continuing to add space to support these manufacturing businesses and, most importantly, to support the kinds of jobs they create.”

Rather than bring in private developers -- as was done with the waterfront office project known as Dock 72 being built by Rudin Management Co. and Boston Properties Inc. -- the plan is to self-fund the development from the revenue the corporation raises from tenants. It will also seek government and philanthropic subsidies and tax credits, based on “quality projects that will create good social policy outcomes,” Ehrenberg said.

The plan focuses on three sites encompassing 24.5 acres (10 hectares) of the 300-acre complex. The one likeliest to come first is a 2.7 million-square-foot complex to be built around what is now a barge basin with oyster traps, Ehrenberg said. It would be about three parts manufacturing space to one part creative offices, designed to appeal to the sort of tech companies that have flocked to Brooklyn. The area is now mostly truck and car parking.

A second site, with about the same mix of manufacturing and creative space, is at present mostly a tow pound used by the New York Police Department. A third is home to what Ehrenberg called the yard’s last federal occupant, a Bureau of Prisons supply depot.

There have been other changes since the Navy Yard launched the Arizona, when Brooklyn had taken in waves of poor immigrants. More recently, the yard’s development corporation has turned to the federal EB-5 program. The program ties permission to enter the country to a requirement that immigrants provide at least $500,000 for projects that create jobs in the U.S.