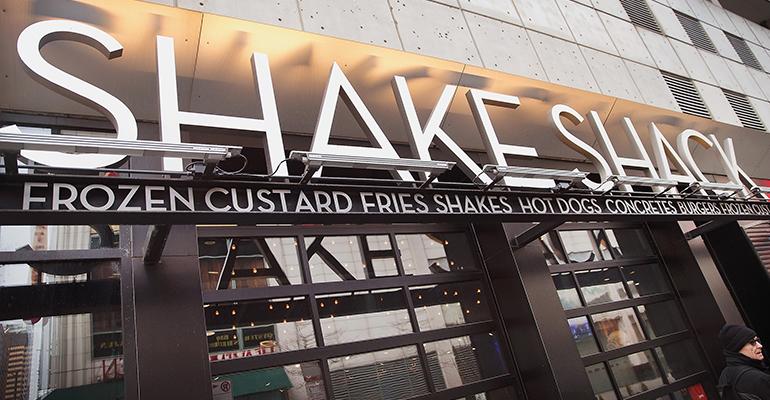 The new design is not necessarily a model for the future. It’s a singular, “experimental Shack” to work out ideas and to respond to customer demands.

(Bloomberg)—Beloved burger chain Shake Shack recently announced plans to use automated kiosks in lieu of employees to take orders at its new Astor Place location. The news rather awkwardly coincided with the announcement that founder Danny Meyer has raised $200 million in private equity to invest in companies with a strong focus on employees and communities.

It’s a critical time for the burger chain. The stock has dipped recently due to the overcrowded market for upscale burgers, and a new $15 minimum wage for businesses with 11 or more employees will go into effect by the end of December 2018 in New York, drastically altering the economics of the fast-food industry. It’s been tough in general for restaurants in New York as astronomical rents threaten spots in packed areas such as Union Square (Meyer relocated his flagship Union Square Cafe in large part because of real estate costs). Even employee-first chains need to survive.

“We need to answer how we take care of our team with that federally mandated wage,” said Chief Executive Officer Randy Garutti during a phone interview. “Our labor costs are skyrocketing.” The new location is “our way of seeing how we are going to do that.”

The company will be paying Astor Place employees $15, Garutti said. Other Shake Shack employees around New York are paid $12.50, but will receive a 20 percent raise in the next 20 months. “All of the higher wage environments are getting somewhere between a 10 and 30 percent increase in starting hourly wage that will affect our company in next few years," he said.

The new design is not necessarily a model for the future. It’s a singular, “experimental Shack” to work out ideas and to respond to customer demands, Garutti said. Besides the kiosks—their in-house designation is “in-Shack apps”—the new Shake Shack will also have a more tech savvy kitchen to expedite orders, will actively experiment with facilitating orders via the app and the company’s burgeoning delivery service, and will no longer accept cash payments. Staff, also known as “hospitality champs,” will greet customers and help them with the new ordering process.

Garutti notes that the company is training 60-plus people to work at the Astor Place location. Shake Shacks average between 50 and 75 employees depending on the time of year and location.

Still, in response to questions about how employee-friendly this model is, Garutti and Meyer invariably bring the conversation back to their customers. “We need to keep developing the tools to provide hospitality in the modern era if our fans are going to stay loyal,” Garutti responded.

“People are making the assumption that this is not employee focused,” said Meyer. “It’s true that the ordering process is automated, which we’ve already done with our Shake Shack app. But we need to figure out how to pay our people with current and future economic demands.” He notes that he doesn’t talk to a human when he checks in for flights, makes a restaurant reservation, or does his banking.

Still, there are times when Meyer himself eschews the automation of the Shake Shack app. (His standard order: cheeseburger, no shake sauce; French fries; coffee milk shake.) “Sometimes I want to stand in line. It’s a fantastic place for me to hear what our customers are saying.”