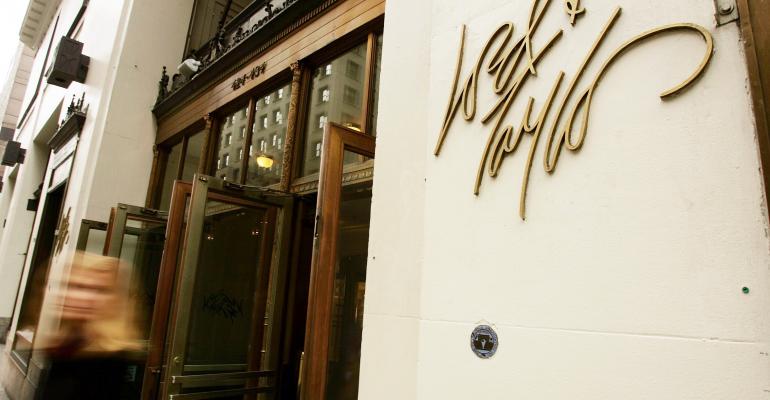 The price tag attests to the demand from a new type of companies for urban space currently occupied by old world department stores.

Few retail experts were surprised to learn last week that Hudson’s Bay sold the flagship location of its Lord & Taylor chain on New York’s Fifth Avenue, or that Hudson’s Bay would scale back its square footage at the location. The march of department store closures has these kinds of effects on the business.

What came as a surprise was the $850 million that co-working space provider WeWork paid for the 676,000-sq.-ft. building. The price tag attests to the value of New York City real estate and demand from a new type of companies for urban space currently occupied by old world department stores. WeWork will move its corporate headquarters into the Lord & Taylor Fifth Avenue building, and Hudson’s Bay will reduce its store space to 150,000 sq. ft., according to a statement from the retailer.

“It is tech, it is millennial, it is new, it is all the things we think are happening,” says Jan Kniffen, CEO of J. Rogers Kniffen Worldwide Enterprises, a New York City-based equity research and financial management consulting firm specializing in retail. “What is it replacing? A department store that has been around since 1826.”

The Hudson’s Bay and WeWork’s agreement will not stop at the Fifth Avenue location. The transaction is expected to be the first of many similar agreements, in which WeWork will gain access to Hudson’s Bay’s 61 million-sq.-ft. global real estate portfolio. In turn, it will lease co-working office space to entrepreneurs, extending its reach in the office market.

Kniffen says he found the price tag on the deal shocking. Based on a previous J. Rogers Kniffen assessment of the property, he expected Hudson’s Bay to monetize it for between $600 million and $650 million. In 2016, a lender independently appraised the property at $655 million, according to a Hudson’s Bay spring 2017 investor presentation.

Urban flagship department stores are increasingly scarce. The remaining ones tend to occupy valuable real estate in prime city locations, say industry experts. Companies that are dominating the new digital economy are likely to be the new crop of buyers and tenants, since they often have vast amounts of cash and are expanding more rapidly than old-economy companies.

“It is not just New York City,” said Howard Davidowitz, chairman of Davidowitz & Associates Inc., a national retail consulting and investment banking firm headquartered in New York City. “It is Macy’s in Minneapolis; it is Macy’s in Chicago. This is going on and it is going to go on in many places.”

The deal between Hudson’s Bay and WeWork follows Amazon leasing the top six floors of space in Macy’s downtown Seattle building. That was not a direct deal between the two retail rivals, however. Macy’s had already sold the top six floors of that building to Starwood Capital Group for at least $65 million. In September, the market learned that Neiman Marcus, which is building a three-story store in Hudson Yards in Manhattan, might scale back the non-sales space of its 190,000-sq.-ft. store. The store's opening has been delayed by about one year due to the development's shifted timeline, according to the company.

Department stores located in the heart of gateway cities could command attractive prices, notes Kniffen. The lofty price of the Lord & Taylor store is likely to remain rare, but other department store locations might also offer tempting prospects for sellers.

Macy’s famed flagship store at Herald Square, its Union Square store in San Francisco and its State Street store in Chicago were among three stores that investment advisor Starboard Value assessed at $7 billion.

Those prospects are tempting for stores in central city locations. Stores located in mid- to lower-tier cities like St. Louis, Pittsburgh or Akron, Ohio, however, are not likely to ignite the same level of excitement as crown jewels in major cities.

Davidowitz notes that landlords have a lot of flexibility to reconfigure palatial old retail buildings to include multiple uses beyond office, and have done so to include condos and hotels.

“Department stores have got a jillion things to do, and they are trying to do it,” he says. “They are including more entertainment, more restaurants. At the same time trying to buy time and monetize their good real estate.”