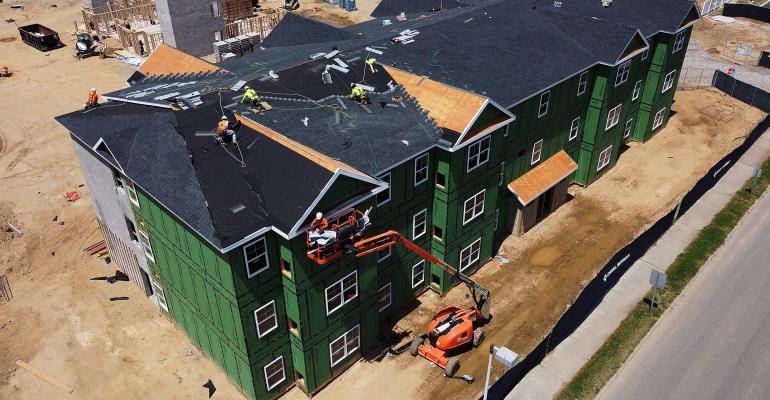 Some lucky multifamily developers will start work on new apartment projects at the perfect time, as the U.S. begins to recover from the economic crisis caused by the COVID pandemic.

They will likely pay far below last year’s prices for development sites. They should have an easy time negotiating with construction contractors. Their apartment units will open just as rents begin to rise again. That time—the right time to start new multifamily projects—is still months or even years in the future, according to many developers and economists.

“If I’m a developer, I am probably waiting untill the first part of next year to make a commitment,” says John Sebree, senior vice president and national director of the multi housing division with brokerage firm Marcus & Millichap. “Multifamily will come out of this in much better shape than the rest of the economy… But we’re going to be going through this for a while.”

The number of new apartments that developers will begin to build over the next few years might be less than half that of the years immediately prior to the pandemic, according Greg Willett, chief economist for RealPage Inc. a provider of property management software and services. “There’s certainly an interruption in development right in front of us,” he says.

According to the third edition of the National Multifamily Housing Council (NMHC) COVID-19 Construction Survey (conducted between May 11 and May 20), 53 percent of surveyed developers reported delays in their construction projects, though delays tied to construction moratoriums began to ease as states have relaxed shelter-in-place restrictions. Seventy-eight percent of those experiencing construction delays also reported a pause in project starts, an 8-percentage-point increase compared to the survey conducted in April.

In addition, the number of respondents seeing materials price increases rose to 17 percent from 5 percent in April. On the positive side, seventy percent of survey respondents reported that they were not impacted by labor shortages.

Developers struggle to finish and lease thousands of new apartments

A project that started construction today probably would not open its doors for a least a year. But a year will probably not be long enough to avoid impact from the damage to the U.S. economy caused by the coronavirus.

“In the best case scenario, a project that begins construction today would open into a recovering economy,” says Andrew Rybczynski, managing consultant with research firm CoStar Group. “They would likely still face elevated vacancy rates due to the supply overhang expected to [be delivered] through the remainder of this year and much of the next.”

Many apartment developers are having a hard time completing projects they started building before the crisis caused by the coronavirus—much less starting new ones. These developers are likely to complete a total of 170,000 to 240,000 units in 2020. “Back in January 2020, we thought they would complete 300,000 units,” says Sebree. “A lot of the construction process slowed as the result of the pandemic.”

Many developers reduced the number of construction workers they hired, for example, to avoid crowding workers together on sites and potentially spreading the virus.

In addition, nearly one third of developers (32.1 percent) report that they had to halt construction because of state and local government mandates, according to a survey of 461 members of NAIOP, the Commercial Real Estate Development Association, conducted between May 18 and 20. (NAIOP used to stand for the National Association for Industrial and Office Parks, though it long ago expanded to include apartment developers.) In addition, one-in-five developers (19.1 percent) suffered through delays or shortages of construction supplies in May, according to the NAIOP survey. The figure was down from nearly a third (31.1 percent) in April.

However, all of the new apartment projects now underway are likely to open eventually, expanding the country’s available number of units by 4 percent of the existing inventory, according to CoStar. “If you broke ground, you can’t stop construction halfway,” says Sebree.

When they finally open, the new apartments begun before the crash will have to deal with a shaky economy. “We do not anticipate a fast clip back to full employment,” says Rybczynski. “History suggests that the U.S. will experience elevated unemployment for some time.”

Many developers will probably hesitate to start to work on new projects while so many of their peers still struggle to finish or lease up new buildings. In the first quarter of 2020, many new apartment properties struggled to find tenants willing to sign leases. “Further struggles would slow construction starts of new apartments more,” notes Rybczynski.

Even among developers willing to plunge into new projects in May 2020, nearly two-thirds (62.3 percent) reported delays in securing permitting or entitlements, according to the NAIOP survey.

The last time the U.S. economy collapsed into recession, developers also started construction on fewer apartment units. “Back in the Great Financial Crisis, multifamily building dropped about 60 percent, sliding from roughly 190,000 market-rate units delivered in 2008 to a low point of 78,000 units finished in 2011,” says Willett.

Once apartments that started construction before the pandemic are completed and rented, the apartment sector should once again benefit from the need for housing that has been consistently strong in prior cycles. “Prior to this pandemic, we were dealing with a housing crisis,” says Sebree. “The underlying fundamentals will remain very, very strong.”

As developers place their bets on when to resume building, they are likely to focus on the monthly employment numbers.

“While we’ve lost more jobs in the past few months than we did back in 2008-2009, this recession could be shorter in duration,” says Willett. “A quick return of economic growth could get building started again. On the other hand, if spread of COVID-19 intensifies later in the year and the economy continues to downsize, a 60 percent pullback in construction is probably the minimum.”

The hot markets of the future

Developers and economists are already trying to guess where the best apartment development markets of the future might be. “There’s good reason to think that some of the key Sun Belt markets that led the country’s apartment construction pace during the past decade will be the first places to get back to some form of business as usual,” says Rybczynski.

“If where we live isn’t tied to where we work to the degree seen historically, the most expensive areas of the country could lose some of their appeal, especially in the zones where density is the highest,” says Willett. “Further development could be deterred if bans on evictions of those not paying rent are extended over and over again, and if there’s more movement to put in place rent growth restrictions.”