Ascena Retailer Group, the parent company of the women’s apparel retailer, filed for chapter 11 bankruptcy in July, and will also be closing one of its Central Ohio offices as it continues to navigate bankruptcy. Ann Taylor stores have failed to pay any of their rent over the last three months. Meanwhile, landlords who rent space to Ascena Retail Group are objecting to its request for a two-month deferral on rent payments, reports Bloomberg. The landlords said in court papers the rent deferral request isn’t reasonable because most of the company’s stores are operating despite the pandemic. The landlords argued the request implies Ascena doesn’t intend to pay rent and will use the deferral period to seek lease concessions.

Another retailer from under the Ascena Retailer Group umbrella, Justice has also not paid rent over the last three months. Spokespeople for the company said the pandemic had forced it to temporarily close all its stores and created ongoing business uncertainty.

A third retailer under the Ascena Retail Group holdings, the women’s clothing store chain has not paid any of its rent over the last three months either.

The apparel and accessories retailer recently reported a 50 percent plunge in revenues to $43.8 million for the three months ended May 2. The retailer paid none of its rent in August, after paying 80.09 percent in July and 26.33 percent in June. In its earnings release, Francesca’s said it had "substantially completed" negotiations with landlords on rent abatements and deferments, which it said would have a "positive impact on the company's cash flow" for fiscal 2020. Sales are expected in the range of $67 million to $71 million, assuming a comparable sales decrease of 16 percent to 11 percent.

Century 21, the discount designer department store, plans to close all 13 of its stores across New York, New Jersey, Pennsylvania, and Florida. The chain has filed for bankruptcy, stating that the pandemic, plus the failure of its insurance companies to pay any of the claims related to it, pushed it over the edge, according to a statement released by the company. Century 21 paid none of its rent in August, after paying 100 percent of its rent in July and none of its rent in June.

J. C. Penney's last profitable year was in 2010, and its net losses have totaled nearly $5 billion since then. Nevertheless, the department store chain paid all of its rent for the past two months, after paying 3.52 percent of its rent in June. The 118-year old retailer, which filed for bankruptcy protection in May, announced an agreement last week to sell its retail operations to Brookfield Property Group and Simon Property Group, two major mall operators that were among its biggest creditors. The company's real estate holdings will be folded into a separate REIT which is to be owned by its lenders, reports CNN. The agreement will allow the company to keep 690 stores open, while it sets about closing another 149 stores by the end of the year.

Sportsman’s Warehouse’s earnings jumped in the second quarter as sales rose 79 percent, reaching $381.0 million, compared to $211.8 million in the second quarter of 2019. Same-store sales jumped 61 percent in the quarter, led by firearms and ammunition purchases, which increased by 123 percent and 75 percent, respectively. Sportsman’s paid all of its rent in August, 99.78 percent of its rent in July and 100 percent of its rent in June. The retailer’s performance benefited from market share gains, a surge in outdoor activities participation and civil disorder.

The supermarket chain is continuing with plans to open 20 new stores this year, filling in key markets such as California, Texas and Georgia and building out in new areas including the Mid-Atlantic and Florida. Sprouts Farmers market paid all of its rent in August, after paying 99.70 percent of its rent in July and 100 percent of its rent in June. Sprouts' CFO Denise Paulonis said the company was able to expand curbside pickup from just 55 stores to the entire chain, while also increasing e-commerce sales from 4 percent of all sales in the first quarter to 13 percent in April and 12 percent in May. 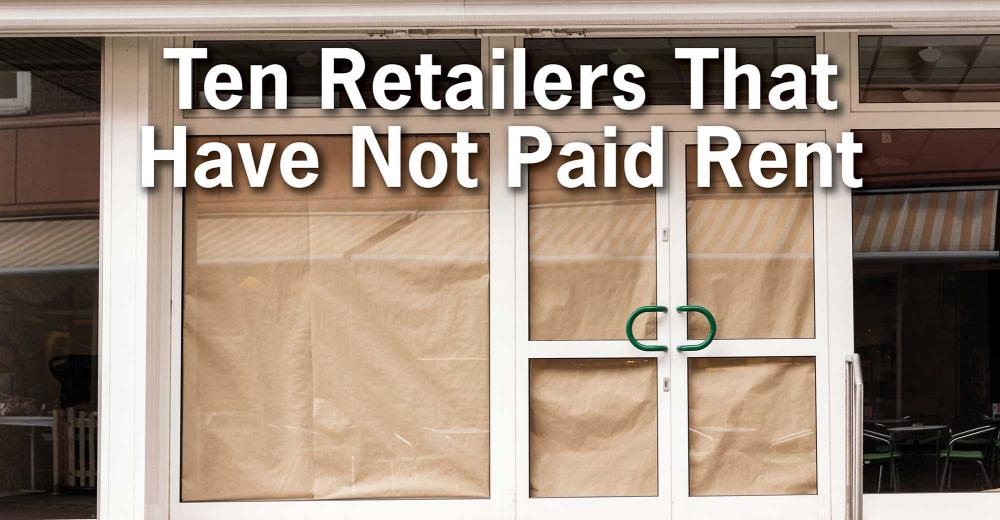