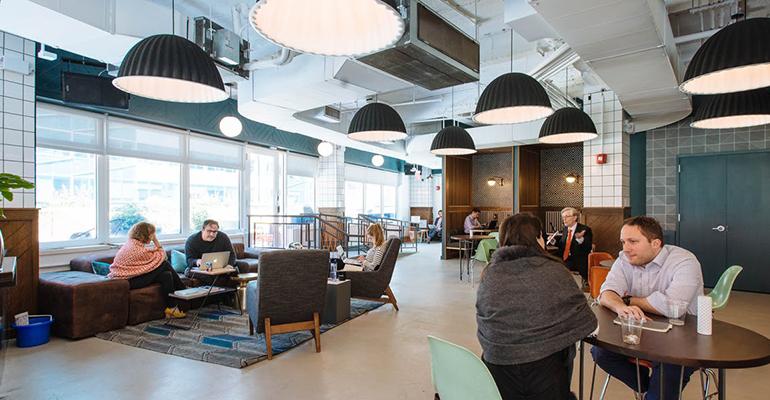 Is WeWork Here to Stay, and Will It Turn Profitable? NREI Readers Weigh In with Their Prognosis.

The co-working space provider has been expanding rapidly. But CRE professionals wonder how sustainable its long-term business model is.

NREI readers think the co-working trend will expand over the next 12 months, bolstering the long-term viability of sector leader WeWork, according to the results of a recent online poll we administered. But many survey respondents also say they expect the co-working space provider to experience significant challenges in the event of a downturn and don’t foresee the company becoming profitable any time soon. WeWork has been on a tear lately, expanding both its fleet of locations and its service offerings. The firm’s flurry of activity, however, has not set well with some market observers when viewed in the context of its financials, with ratings agency Moody’s discontinuing its coverage of the firm in August, saying it did not have enough information to judge its credit-worthiness. To gauge the views on the company’s business model and expansion pace in the wider commercial real estate industry, NREI asked its readers to weigh in on their forecast for co-working space demand in the U.S. over the next year and WeWork’s positioning in the market.

A majority of the 571 respondents that don’t currently have WeWork in their buildings—59.8 percent—also indicated they would consider leasing space to the company as a tenant. At the moment, only 6.5 percent of survey respondents have WeWork as a tenant in their buildings. Of those, comprising only 54 responses, a majority would rate the company at a 4 or above on a 1 to 10 scale indicating 10 as the most favorable view of a tenant.

“They will pay above-market rent to get the space they want, which is great for landlords,” wrote one reader, adding, however, that WeWork can “bring a lot of in-and-out traffic to the building that can be disruptive to other tenants.” Several others noted that the relationship between traditional landlords and WeWork is still in the testing stage.

Respondents were somewhat positive on the viability of WeWork’s core business model, rating the company with an average of 6.18 on a scale of 1 to 10.

In open-ended comments, respondents mentioned the high level of competition in the co-working sector and lack of a strong balance sheet as some of the major reasons they question WeWork’s ability to survive in the long-term. “There are little to no barriers to entry for competitors; WeWork does not have a ‘moat,’” one reader wrote. “The model is easily copied by others. WeWork is only surviving for two reasons: they are able to continually raise equity from gullible investors and they are living off 12 months free rent in new leases.”

Multiple respondents noted the mismatch between WeWork’s liabilities in signing long-term leases when compared to the short-term nature of their “subleases,” indicating that the company would need strong financials to deal in the event of a significant drop in demand for office space. The specter of “Regus”—a global workplace provider that launched in the late 1980s, expanded rapidly and was forced to file for Chapter 11 bankruptcy in 2003 after the dot.com bubble burst—came up again and again.

“I see the need for the space and what they offer,” a reader wrote. “The worry is that when there is a downturn, anything that is classified as ‘not required’ would be cut. An office space is not required for much of what I do. I can use the many free access locations where so many of the clients do not mind meeting.”

“Overall good business idea, but under-capitalized and, I would think, vulnerable,” echoed another respondent.

A plurality of respondents (39.6 percent) also felt WeWork’s viability will be challenged in the event of a downturn in the U.S. office sector, with another 12.3 percent indicating it will not survive a downturn. A significant portion of respondents (32.9 percent) think WeWork will face business challenges in the event of a downturn, but will be able to survive. Only 8.1 percent said the company would face no challenges at all and only 12.3 percent felt it would not survive a downturn. The remaining 7.0 percent said they were not sure about its chances.

A spokesperson for WeWork noted that the company expects significant growth in demand for co-working space, partly driven by changes in lease accounting rules, as well as by changes in the way companies run businesses. “We expect more companies to turn towards flexible spaces, and away from long-term leases, in the event of a downturn,” he wrote in an email. “Furthermore, our business has evolved considerably since we were founded in 2010. At the time, we primarily served start-ups and freelancers. Today, over 30 percent of our members come from the enterprise segment (companies with over 1,000 employees), which are much more resilient to an economic downturn. We have also established Powered by We, which allows us to serve companies in their own locations, without WeWork having to commit to a lease. Furthermore, we are increasingly entering into management agreements with landlords, which sees us share the upside with them while reducing our risks. All of this should help mitigate any risks our business would face in the event of a downturn.”

WeWork’s pace of new locations openings appeared to be among the core concerns cited by many respondents. A majority of respondents (59.3 percent) indicated they believe WeWork is expanding too quickly. Only 4.1 percent felt the company is not expanding enough, while 16.4 percent said it is opening new locations at just the right pace. Another 20.2 percent said they were uncertain about the pace of expansion.

When asked about WeWork’s foray into new business lines, including real estate services, 44.8 percent of respondents said the company was drifting too far away from its core business, while 38.5 percent felt the moves made sense. The remaining 16.7 percent said they were not sure about these strategies.

In the open-ended comments section, many readers expressed understanding of WeWork’s need to diversify, but were surprised the company would try to enter a space as competitive as office brokerage.

According to one respondent, “It makes sense to use their name to enter new, more stable businesses to offset risk in their primary business.” “Smart to diversify their revenue base,” wrote another.

For other respondents, however, “It does not seem sensible to try to compete in the mature market of real estate services.” “I don't know what their competitive advantage would be” and “The foray into brokerage was most probably a mistake. It creates a competitor from what could have been a symbiotic relationship with brokers.”

Another lingering question surrounding WeWork has been its profitability—or so far, lack thereof. According to ratings agency Fitch, at year-end 2017, WeWork had $18.2 billion in lease obligations. In 2017, its losses totaled $933 million, while its revenue came to $866 million.

Moody’s, before discontinuing its coverage, gave WeWork’s $702 million in unsecured debt a B3 rating—six notches into the junk tier. According to Fitch Ratings, which currently rates WeWork at “BB,” while WeWork has yet to turn a profit, the company “does have sufficient financial flexibility to substantially reduce growth capex and operating expenses,” in the event of a downturn.

S&P Global has given WeWork a “B” corporate credit rating, with a stable outlook. In an April 2018 note, the company’s researchers wrote that they view WeWork as having “adequate liquidity,” with its sources of liquidity totaling at least 1.2x its uses during the period between April 2018 and April 2019. The researchers also noted that to absorb a black swan event, “WeWork would require some refinancing given its growth investment plans.”

“They must be careful about overpaying for [their] spaces, especially as they expand in global capitals,” wrote one respondent. “If they can control that, they have a great chance of becoming profitable in the medium term.” According to another, “The valuation is probably way too high. But there is a viable business there.”

However, NREI readers also voiced substantial notes of caution in their open-ended responses. “The fact that they justify their valuation on ‘culture’ is, in essence, the same thing as putting all of your eggs in the ‘goodwill’ basket,” one wrote. “It will never have staying power. Amazon was backed by something tangible—goods and services moving through the marketplace. WeWork is backed by a here today gone tomorrow workplace trend. When it leaves, they have no substantive assets or intermediary function in the marketplace.” Another noted that WeWork executives “think they are creating relationships with smaller users that may turn [into] larger users needing their own space. Been there, done that. Maybe it will be different this time, but the CRE tenant rep business will ferociously compete.”

“All depends on how well/poorly they are managing their current balance sheet, cash flow and pace of growth,” wrote a third reader. “And whether their capital sources will stick with them through profitability.”

That being said, at least one respondent noted that WeWork is now in a “too big to fail” category. “Despite overarching concerns about where we are in the cycle and how that might affect WeWork, I think the company has done well to structure its lease obligations in a manner that would provide them with plenty of flexibility in the case of a downturn,” this reader wrote. “Moreover, the rate of expansion to date has essentially positioned the company in the ‘too big to fail’ category of tenants. If a downturn does happen and WeWork occupancy rates decline, landlords will be forced to renegotiate lease terms and provide major concessions or face a tsunami of vacant space that would effectively reset rental rates in those markets altogether.”

According to the WeWork spokesperson, the company is “in a stronger financial position than we have ever been, with approximately $4 billion of pro forma cash and cash commitments at the end of H2’18. Our management team is driven by the objective of building a sustainable business that is successful over the long-term. To that end, and in response to the tremendous global demand we are seeing, we are making substantial investments in our business and its continued growth. It’s almost important to note that our core business, excluding growth investments, is performing well, with accelerating profitability and margin improvements.”

NREI administered the survey between Sept. 19 and Sept. 27. It received a total of 834 responses.