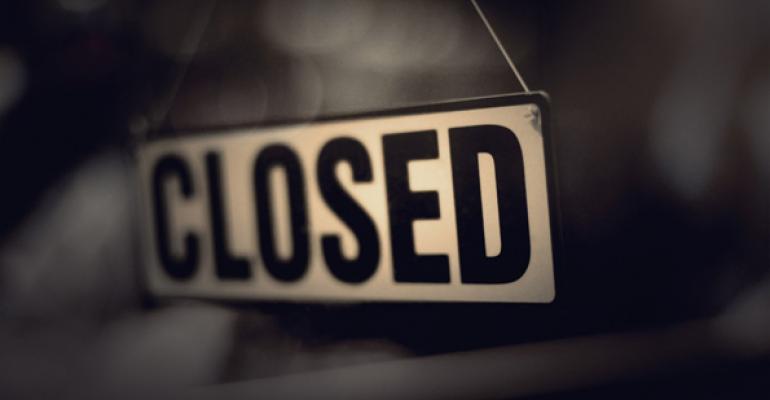 From the Gap to Family Dollar, retailers are announcing hundreds of store closures, with no end in sight.

It’s only mid-March and already a slew of prominent retailers have announced thousands of store closures around the U.S. And the pace of closings isn’t expected to slow anytime soon.

So far this year, 10 national retail chains have filed bankruptcy.

“This phenomenon definitely hasn’t abated since last year in terms of retailers that are struggling,” says Ana Lai, senior director and analytical manager at S&P Global Ratings. “They’re either filing for bankruptcy or even the ones that are still operating are looking to reduce their store footprint to be more efficient, to invest in their online channel.”

“It’s a secular shift that continues to happen, and I guess we don’t see this trend turning around anytime soon,” Lai adds.

The number of store closure announcements so far in 2019 is up 23 percent vs. this time last year, according to a February Coresight report.

CoreSight researchers say there’s “no light at the end of the tunnel,” with potentially many more closures on the way due to companies currently in the bankruptcy process and more on the horizon. Coresight cites accelerated e-commerce growth, rising interesting rates and flat and falling store-based sales as factors impacting the sector.

Gap Inc. said it would shutter 230 stores over two years, following a 7 percent drop in same-store sales in the fourth quarter of 2018.

The company also announced it will split into two publicly-traded companies by spinning off its Old Navy brand and create a yet-to-be-named new company to house its other brands: the Gap brand, Athleta, Banana Republic, Intermix and Hill City. Following the announcement, Gap stock shot up 25 percent.

Retail experts say the split is a smart strategy

“Old Navy has always been the star performer,” says Gabriella Santaniello, president and founder of retail consulting firm A Line Partners in Los Angeles. “They saw the shift in fashion trends and people want more of the fast fashion. Gap has just been weighing on the stock. Investors didn’t see a return. This move for them to separate [resulted] in stock going up 25 percent. That’s when investors were like ‘OK. We’re finally going to get some value out of this.’”

“I think for the Old Navy brand they’re celebrating,” adds David Weiss, a partner at Chicago-based consulting firm McMillan Doolittle. “They have been the profit-driver for years now, and their profits have been siphoned off into financing the turnaround efforts of the rest of the company or the growth efforts of a brand like Athleta. Now their profits are going to get reinvested in them.”

For other Gap brands, however, Weiss warns there’s an increased pressure to find the right space in the marketplace. “The crutch isn’t there anymore,” he notes.

Gap Inc. executives say there will be a “healthier channel mix after the restructuring with nearly 40 percent of sales coming from online and the remainder split fairly evenly between the specialty and value channels.”

Following a tough holiday season, J.C. Penney Co. announced it will close another 18 department stores, including the three locations previously announced in January, and nine home and furniture stores. The retailer also got out of the major appliances business.

Same-store sales for the fourth quarter fell 6 percent from a year earlier.

“J.C. Penney continues to struggle,” Lai says. “They have a B- minus rating with a negative outlook, so it’s a challenging situation. It’s a highly risky type of rating.”

The retailer’s stock dropped below $1 for the first time ever in late December. It was trading at $1.82 per share as of mid-week.

J.C. Penney was trying to go after the Sears customer following that retailer’s many store closures, however, that strategy wasn’t working, says Santaniello. Now the retailer is going back to its core competencies.

“They have a strong women’s business,” Santaniello says. “It’s the low hanging fruit. What’s going to give us the most return in the shortest period of time where we can just say, ‘We’ve made some positive changes and people get excited.’ It doesn’t mean you’re going to neglect everything else. It just means everything else is going to take a little bit longer.”

“Everybody’s looking for little nuggets of information that’s positive that will keep them invested in the stock or create some interest,” she adds. “That seems to me what J.C. Penney’s strategy is.”

L Brands Inc. announced it will close 53 Victoria’s Secret locations in North America this year following a 3 percent decline in same-store sales over the holidays.

Also, an activist investor with a small stake in L Brands is pushing for the company to split off its profitable and growing Bath & Body Works brand from the flailing Victoria’s Secret chain.

“It’s hard when you have five different brands and one is amazing and the rest aren’t performing, and it just weighs on the stock,” Santaniello says. “Nobody gets value out of it and they lose money. It’s just a disaster. I think it’s a great idea [to separate the companies].”

Despite major growth, Foot Locker announced it will close roughly 165 stores across the country. Same-store sales for stores that have been open for more than a year jumped 9.7 percent in the fourth quarter.

The retailer also plans to spend about $175 million to improve its store fleet, including adding 80 new stores, further expanding into Asia and undertaking 190 remodels of existing stores.

Payless ShoeSource will close all remaining 2,100 stores and liquidate after its second Chapter 11 filing in two years.

Discount chain Shopko filed for bankruptcy and will close 251 stores—about two thirds of its retail locations.

Charlotte Russe filed for bankruptcy and will shutter 94 of its more than 500 locations.

Gymboree filed for bankruptcy—for the second time in two years–-and will close its 540 Gymboree stores and outlets in the U.S. and Canada and 265 Crazy 8 stores in the U.S. (The company is selling its Janie and Jack brand to Gap Inc. and its online platform for Gymboree to Children’s Place).

Dollar Tree Inc. plans to close as many as 390 Family Dollar stores this year and renovate another 1,000 stores as part of a resurgence of that banner, which has struggled since being acquired in 2015.

“The story is still unfolding, but the longer-term viability of Sears remains in question,” Lai says. “Even if they restructure, it’s a concept that has struggled, and I’m not sure what the ultimate fate of the stores [will be]. I wouldn’t be surprised if they continue to sell off stores and close stores, but not at an accelerated pace or under a liquidation scenario.”

“When people say retail is dead, it’s not dead at all,” says Amanda Nicholson, professor of retail practice at Syracuse University in New York. She points to a 4.6 percent increase in retail sales in the U.S. in 2018, which totaled $3.68 trillion.

“Now, how people are buying things has changed, but retail hasn’t changed,” Nicholson adds. “Retail is the business of delivering goods and services to the ultimate consumer. It’s not dying at all. It’s reinventing itself.”

“In one sense, everybody is really upset. Stores are closing, and yes, it’s a shock to the system,” Santaniello notes. “But in the long run, it’s going to be healthier. America was over-stored. Every retailer was over-stored… Ten or 15 years ago, the only way to grow your business was really through opening stores...  I think where it’s moving is a much healthier place.”

Historically, many retailers were signing 10-year-plus leases, Santaniello says. Within the past 10 years, the massive change in the way people shop occurred. There’s a new generation of consumers who are buying a lot of products online or in-app.

“It caught on and that’s the way everybody shops now,” she says. “The minute these leases came up, a lot of retailers were like, ‘OK, we’re going to reevaluate, renegotiate.”

In some cases, Santaniello says the malls made it so enticing to renegotiate terms that it didn’t pay for the retailer to move out. They signed sweet deals with much shorter-term leases.

“Now those leases are coming up, and retailers are like, ‘We don’t need it. Let’s get out. Our business is moving online. We need to focus on the low-hanging fruit, which is our most profitable stores. And we need to focus on our digital business and closing the loop where we’re going to do buy online, pick up in store, in-app shopping, etc.’”

Many retailers could continue to struggle, and more will face difficulty if economic growth slows.

David Simon, CEO of Simon Property Group—the largest mall owner in the U.S.—said on a conference call with investors in February that there are retail chains that Simon is nervous about, and more bankruptcies will occur for retailers with high debt loads, according to CNBC.

However, Simon also said he’s confident in plans to bring non-traditional uses to malls, including housing, gyms and hotels to backfill vacancies left behind by J.C. Penney, Sears and other retailers.

S&P Global Ratings reports that 2019 will likely be another challenging year for apparel retailers, some department stores and specialty merchandise retailers, as the sector works to address e-commerce competitors and shifting consumer behavior.

“The evolution will continue,” Lai says. “The specialty apparel guys will need to be nimble and continue to shrink their store base, while investing in their e-commerce channel and try to operate them as one.”

As for the department stores, Lai says, “We’ll see what will happen to Macy’s, but I think they’re also dealing with issues on how to make their stores more productive. It’s possible that J.C Penney and Macy’s continue to shrink their store base over time, and there’s more space for mall owners to redevelop.”

S&P Global Ratings reports that while poorly positioned landlords will struggle, the well-positioned retail REITs—when faced with the prospect of taking back space from weak tenants—will be able to reposition properties successfully, partly because they have the financial resources to do so.