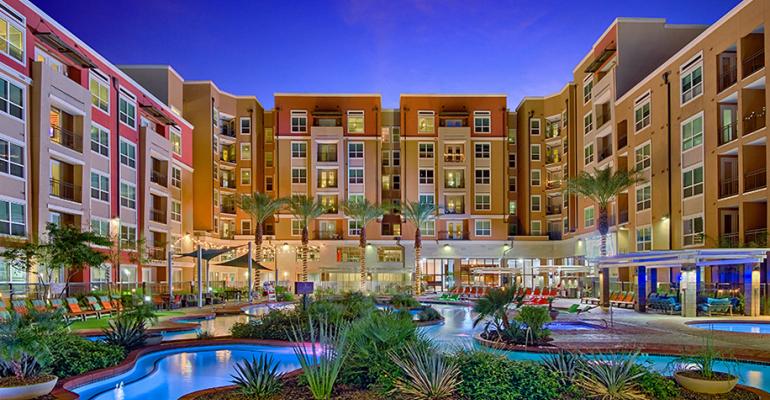 Once again, student housing developers will open more beds near Tier Two schools than near Tier One universities when the academic year begins for 2020.

“These are state schools that aren’t those flagship campuses, but are still large, state-funded institutions such as Utah Valley, Towson, Alabama-Birmingham, and Florida International,” says Carl Whitaker, manager of market analytics with RealPage Inc., a provider of property management software and services.

Developers still prefer to build new student housing communities within walking distance of a short list of Tier One universities that are growing quickly. But development sites near these schools are difficult to find. The majority of new beds planned to open a year from now will be close to Tier Two schools.

Student housing developers are likely to build just as many new student housing beds next year as they did in 2019, even after several years of delivering more than 40,000 new beds a year.

“Essentially, the same total volume of new deliveries are expected in [the] fall 2020 as were completed in [the] fall 2019,” says Frederick W. Pierce, president and CEO of Pierce Education Properties, a developer and manager of student housing properties.

Developers are already working on projects to build 41,168 new beds at 64 different schools for the start of the 2020 academic year, according to RealPage. Less than half (40 percent) of these new beds will open at school’s that are technically Tier One universities (near schools in the Power Five football conference).

“The majority of this new supply in 2020 will open at Tier Two universities,” says Pierce. Developers are building on a trend that was already apparent in the projects that opened this fall. Just 47 percent of the beds that opened for 2019 are at Tier One universities. The majority of new student housing beds once again opened at Tier Two schools.

“Some of these smaller schools are beginning to get their first real bulk deliveries in 2020,” says Whitaker. For example, developers now plan to open more than a thousand new beds of student housing at the University of Nevada in Reno (1,270 beds) in 2020, according to RealPage. That’s more than developers have opened at the school over the last several years combined.

Developers also plan to open more than 1,000 new student housing beds at California State University at Sacramento, another Tier Two school. In comparison, that’s much more than the few hundred beds of student housing currently planned to open in 2020 at Virginia Tech in Blacksburg, Va., which is technically a Tier One school.

Developers are having to look at a broader set of schools to find the most desirable sites that are within easy walking distance of university classrooms. “The location of purpose-built student housing projects has progressively moved closer to campus over the last two decades,” says Pierce.

“The base rental rates are little higher… and they are getting better rent growth and they have better occupancies,” says Whitaker. However, these sites are smaller and more expensive. “It is getting more challenging to find the best available land.”