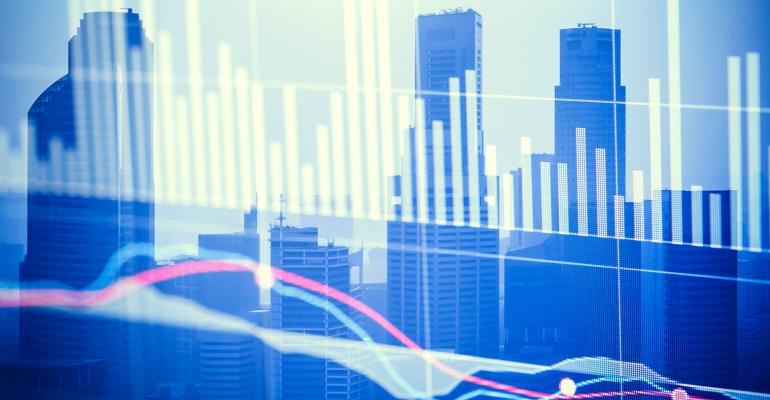 CMBS issuance in 2018 might be below last year’s level.

CMBS lenders are working harder to retain market share in a highly competitive sector where the overall pie for conduit lending doesn’t appear to be getting any bigger.

CMBS issuance, which started out the first half of the year with a solid increase in activity, has slowed noticeably in the third quarter. According to Commercial Mortgage Alert, an industry newsletter, year-to-date issuance of $64.7 billion through mid-October is now trailing the pace set last year by 3 percent. And with what appears to be a thin pipeline of deals ahead for the fourth quarter, lending volume may fall short of the $87.8 billion in issuance reported last year.

One of the main factors dragging on lending volume is a shrinking pipeline of maturities. The peak years for CMBS loan maturities are now in the rearview mirror. The volume of maturities dropped from highs of $136.0 and $124.6 billion in 2016 and 2017 to $18.6 billion this year, according to Trepp. Although the volume of maturities is set to increase somewhat in 2019 and 2020 with about $40 billion in annual maturities, the decline is having a big impact on the market, notes Joe McBride, director of research and applied data at Trepp.

At the same time, CMBS lenders are battling more competitive pressure from other capital sources. CMBS has traditionally been the dominant capital source for higher leverage loans, which typically equates to LTVs of 70 to 75 percent these days. However, in recent years there has been more capital moving into that higher leverage space in search of higher yields.

Traditional lenders are pushing leverage higher and equity investors are also allocating more money to private equity debt funds that provide bridge or mezzanine loans on top of senior debt, notes Keith Largay, managing director and head of the Midwest capital markets group for real estate services firm JLL in Chicago. In addition, bridge lenders are emphasizing the added flexibility of those loan products, he says. “So, the bridge loan market is absolutely taking market share from CMBS,” he adds.

CMBS lenders are also adapting to a shift by senior CMBS investors that are applying their own pressure on lenders to create loan pools with a lower weighted average leverage—oftentimes at 60 percent or below. That means that the CMBS market has had to go out and source low leverage loans to balance out some of the higher leverage deals with a range on individual loans that might be from 55 to 75 percent.

CMBS lenders are finding an edge by offering more interest-only loans. What ratings agencies and research groups have pointed out in some of their statistics is that concentration of interest-only loans in CMBS has steadily increased over the last three years, says DeRoy. “I think that is partly due to the fact that lenders are being asked to originate pools that have a weighted LTV of sub-60 percent,” he says.

Over the past decade there has also been a bigger shift for CMBS to finance large single-borrower transactions—mega-deals for large trophy assets or portfolios of half a billion dollars and up that can be too big for the regular lending market to execute. Those single-borrower deals now account for about half of all CMBS transactions, notes McBride.

Some CMBS lenders are also working to grow market share by differentiating themselves with new products or services. For example, KeyBank is projecting that its CMBS issuance will be up about 15 percent this year. KeyBank has been focusing on real estate owners and operators that are using the bank’s balance sheet lending and then taking those loans into the permanent market through Fannie Mae, Freddie Mac, HUD and CMBS. “That direct relationship channel is part and parcel to our real estate strategy, and KeyBank having all of those products and services for our customers has really benefited us in the marketplace this year,” says DeRoy.

KeyBank also launched a streamlined small-balance conduit program last year that is continuing to gain momentum. Local and regional operators have become increasingly fatigued by the CMBS process, including both executing loans on the front-end and servicing existing loans on the back-end, notes DeRoy. In its new streamlined conduit program, KeyBank hopes to eliminate “pain points” by controlling originating and processing and retaining all of the servicing rights after the loan closes to give borrowers a single point of contact. The company is also putting a cap on fees to provide lower fixed loan costs.

Despite the competitive pressures, industry participants are optimistic for a still steady pipeline of issuance in 2019. “I think the CMBS market is healthy and liquid and the industry has reacted well to some of the pre-recession criticisms,” says DeRoy. The industry as a whole has done a good job of making CMBS lending a more transparent process, real estate fundamentals are very strong and the economy is still spurring new business investment, he says. “So, I think there are still brighter days ahead for CMBS and that 2019 should still be a healthy year,” he adds.