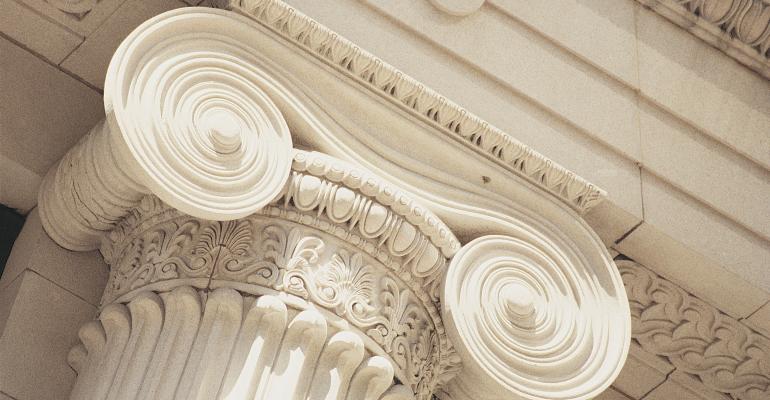 CMBS Issuance Was Higher Than Expected in 2017. Can the Trend Continue?

Sourcing new loans could be a bigger challenge in the coming year as the wall of maturities continues to shrink.

The CMBS market is kicking off 2018 with a lot more confidence than was the case a year ago.

In 2016, everyone was living in fear of risk retention rules and what they were going to do to the CMBS market, notes Tom Fish, executive managing director and co-lead of the real estate investment banking practice at real estate services firm JLL. People were worried that the new rules that went into effect last January would slow issuance, significantly increase pricing and tilt the playing field in favor of bigger players.

Although some CMBS issuers have left the market, there continues to be about two dozen active firms, and fears about higher prices and lower issuance were never realized. “I’m very optimistic about what’s going to happen over the next year,” says Fish. “If rates don’t run away from us, I expect that we will have a good 2018.”

CMBS has regained some of the momentum it lost in 2016. In 2017, U.S. issuance reached $95.3 billion compared to $76 billion in 2016, according to Commercial Mortgage Alert, an industry newsletter. “Most people are thrilled at the issuance level we have achieved,” says Manus Clancy, a senior managing director at data firm Trepp LLC. Going into 2017, there was a lot of uncertainty about how the new deals would be received by investors, what the pipeline would look like, or how much competition would come from insurance companies, he adds.

Issuers are now using three different structures to manage the risk retention rules, carving out a horizontal tranche, a vertical tranche or an “L” shaped that is a combination of the two. So far, there is no single structure that has emerging as the preferred choice. All are being used fairly equally on a case-by-case basis. “That is a good thing, because it gives the issuers and the B-piece buyers all some level of flexibility,” says Clancy.

One reason why higher costs didn’t materialize is because there is a perception that risk retention boosted loan quality and investors are paying higher prices for the non-retained bonds, notes Ory Schwartz, a managing director at capital services provider NorthMarq Capital in Newport Beach, Calif. Issuers are being disciplined in their underwriting. Some shops have also tightened spreads in order to attract the better loans.

The CMBS market has adapted to risk retention rules, but it is not all smooth sailing. Sourcing new loans could be a bigger challenge in the coming year as the wall of maturities continues to shrink. Trepp is predicting that U.S. issuance will decline to about $80 billion in the coming year. “The rightsizing of this market seems to be in that $75 to $125 billion range,” says Clancy.

CMBS remains a competitive financing option, along with banks, life companies and private equity sources. “Based on what other capital sources are doing, there is always going to be a need for CMBS in the niche it plays, which is higher leverage and secondary and tertiary markets,” says Schwartz. For many borrowers who want fixed-rate, non-recourse loans, CMBS is still the best option, he adds.

Yet the industry is bracing for a thinning deal pipeline from loan maturities. Although there was a fair amount of five-year loans written in 2013 that will be coming due, there is going to be a sharp drop in 10-year maturities that will impact issuance volume this year, notes Schwartz. CMBS lending peaked in 2007 with issuance that topped nearly $230 billion before plummeting to $12 billion in 2008, according to Commercial Mortgage Alert.

And despite improving delinquency rates, retail properties continue to be a concern. The industry is keeping close tabs on its exposure to retail in terms of centers losing major anchors and potential loan defaults. Capital may be less available for new retail loans. Retail loans are generally going to class-A properties with a good tenant base and long-term leases. Older malls in secondary and tertiary markets that are anchored by Sears, Macy’s and J.C. Penney are going to be harder to finance across all lending sources, notes Clancy.

Another question for the CMBS market is whether the banks that are originating and retaining a piece of that issuance will reach capacity at some point, and if so, how might that impact the CMBS sector. “Will they find a way of selling off some of that and keeping that power dry, or will they have a problem? I think that’s unclear at this point,” says Fish.