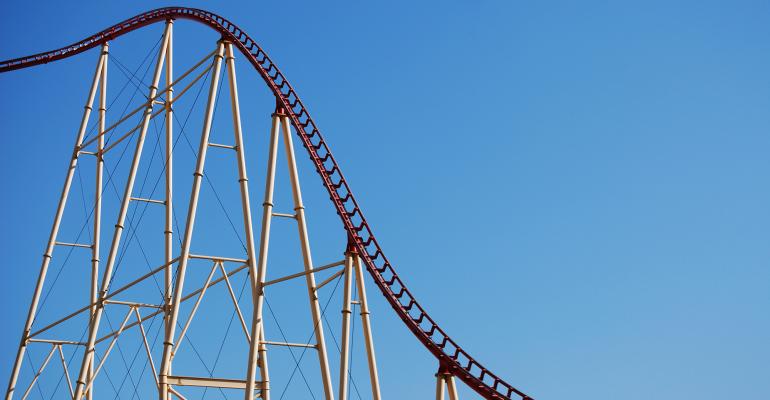 Capital markets have priced in a 25-basis point increase ahead of Fed meeting.

This week’s scheduled meeting of the Federal Reserve Board on Sept. 25th and 26th is once again shining a spotlight on rising interest rates and what has remained a stubbornly flat yield curve.

People love to talk about the flat yield curve and the potential move to an inverted yield curve when short-term benchmark lending rates would be higher than long-term rates. The “yield curve” typically refers to the difference in yield between the 2-year and 10-year Treasuries, and it has been hovering at a slim margin of between 24 and 26 basis points this month.

One reason that flat yield curve gets so much attention is that, in the past, it has been a leading indicator of a recession. “That’s what drives a lot of this talk. When the yield curve has inverted, it’s not that far after that we have seen recessionary environments,” says Rob Mangrelli, director of global real estate hedging and capital markets at Chatham Financial, a risk management advisory firm.

“Where you certainly might hear an argument that this time is different is driven by the backdrop in terms of the monetary policy,” says Mangrelli. Globally, central banks have been ballooning their balance sheets through quantitative easing. In the U.S., the Federal Reserve was active in buying Treasuries and mortgage-backed securities. So, one could argue that this current cycle is different because yields on the long end of the curve have been artificially depressed by monetary policy, he says.

The question for commercial real estate investors is how an inverted yield curve might impact borrowing and capital markets. Even though the 10-year Treasury remains slightly higher than short-term benchmark rates, some borrowers are already finding that the rates on short-term fixed and floating rate debt are the same or even slightly higher than the rate on longer term fixed-rate loans.

Floating rate commercial real estate debt is priced off of LIBOR or prime, while fixed-rate loans are priced off the corresponding Treasury, such as the 5-year or 10-year Treasuries. The current flat yield curve means that there is not a lot of pricing difference between doing a 5- and a 10-year mortgage (currently about 50 basis points). In fact, in the CMBS space, 5-year money might be more expensive than 10-year money, says Dan Rosenberg, managing director of capital markets at Cohen Financial, a division of SunTrust Bank, in Chicago. “That is counter-intuitive, but it’s a less liquid market so the credit spreads are higher,” he says.

Likewise, a flat or inverted yield curve means that many floating rate loans are going to exceed the coupon rate of what a fixed-rate loan would be, says Matthew Rocco, president of Grandbridge Real Estate Capital. The 30-day LIBOR at 2.2 percent (as of Sept. 21st) plus a spread of 250 basis points puts the cost of floating rate debt at about 4.70-4.75 percent. There are some lenders, including life companies and GSEs, that can get under that with fixed-rate loans.

“It is going to be very interesting when we see the floating rate and the 5-, 7- and 10-year rates intersect, and I think we’re one to two Fed hikes away from that happening,” says Rocco.

Borrowers who demand maximum flexibility for strategic reasons, such as property repositioning or a sale, will stay with short-term floating rate debt. However, for those more focused on permanent loans, the inflection point between the floating rate and the fixed rate means that lenders need to be prepared to take those floating rate loans and be able to refinance them into a fixed-rate alternative—likely at a lower coupon rate than what they had with floating, notes Rocco.

“Fed moves often mean that all rates go up. But right now, we don’t see that steepening in the yield curve, certainly in the balance of 2018, and I think we are going to watch very closely in the first half of 2019,” says Rocco. “So, right now we see a favorable transition of product moving from floating to fixed for, at a minimum, at least the next 12 months.”

The widely anticipated rate hike of 25 basis points at the September meeting has already been baked into short-term rates, such as 1-month and 3-month LIBOR. So that rate increase won’t necessarily flatten the yield curve further. However, if the Fed surprises the market with a higher 50 basis point hike, it would create a further change and possibly an inversion.

In general, the market is pricing in roughly two to three rate hikes over the next 12 months. But the market doesn’t price in any additional rate hikes beyond that, which is why there are very flat expectations for where rates will be towards 2020 and 2021, notes Mangrelli.

“There is certainly a chance that the Fed surprises markets, maybe not in its decision to hike rates by 25 basis points, but possibly in the statement itself or in the press conference and their use of forward guidance,” he says.