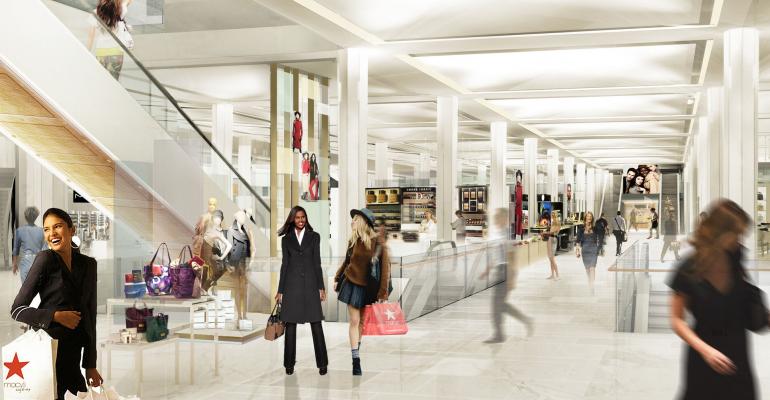 Though smaller than a traditional Macy’s, the new stores could drive more foot traffic to lifestyle centers.

The drumbeat of store closures continues, with well over 1,000 already on the books this year. No doubt, these shutdowns will harm landlords, including retail REITs.

But although it wouldn’t make up for the loss of hundreds of larger stores, Macy Inc.’s new smaller-store concept stands to benefit retail REITs and other landlords that own robust portfolios of lifestyle centers—centers that one retail expert says “are picking up where traditional malls left off.”

On Feb. 6, department store giant Macy’s debuted its Market by Macy’s format at a lifestyle center in Southlake, Texas, a Dallas-Fort Worth suburb. The boutique-style store, measuring 20,000 sq. ft., features a curated, ever-evolving collection of merchandise, a beauty shop, a café and bar, and community-oriented events. By comparison, a typical Macy’s department store encompasses 150,000 sq. ft. and offers a more static selection of merchandise.

The introduction of the smaller-footprint Market by Macy’s brand aligns with the overall shrinkage of Macy’s stores, both in number and in size. Two days before it introduced Market by Macy’s, the New York City-based retailer announced it plans to close 125 stores over the next three years. Simultaneously, Macy’s continues to reduce its total square footage, and to embrace smaller-format, off-mall offerings like the Backstage and Bloomingdale’s The Outlet off-price chains and the Bluemercury beauty chain.

So, which retail REITs might gain the most from Macy’s “smaller is better” strategy, particularly the rollout of Market by Macy’s?

“REITs that will benefit from the new format will have the best-located centers in densely populated areas with high per-capita income. The centers are also likely to have other upscale stores and dining options—Macy’s will not want their new concepts located next to mom-and-pop nail salons or the local pizza parlor,” says Chris Wimmer, head of the REIT sector at Morningstar Credit Ratings LLC.

A lot of retail landlords might be interested in the concept, as it would represent a sizeable footprint for operators of lifestyle centers and similar properties, according to James Shanahan, senior equity research analyst at St. Louis-based financial services provider Edward Jones. Plus, the smaller concept that still carries the Macy’s name could help drive more foot traffic.

“Our brick-and-mortar strategy won’t be constrained by our mall presence. We have options to expand off the mall,” Jeff Gennette, CEO of Macy’s, told the Wall Street Journal.

“Lifestyle centers offer an opportunity for brands to take a more targeted approach to customer engagement,” Spieckerman notes. “This is particularly true for Macy’s, which has traditionally had to carry the anchor burden within malls, which requires a generalist approach that can diminish brand impact. By taking its brand spin-off to lifestyle centers, Macy’s can credibly take an upscale position without investing in massive amounts of inventory.”

While Market by Macy’s won’t be a “magic bullet” for a turnaround at Macy’s, it’s a “compelling concept” that enables frequent rotation of brands and merchandise, thereby prompting repeat visits by shoppers, according to Spieckerman.

“The Market by Macy’s concept isn’t just smaller—it’s radically different from a typical Macy’s store, and that’s a good thing,” she says. “Going forward, the goal isn’t to make stores more like websites, but rather to leverage store environments to create a unique experience that can’t be found online. Market by Macy’s embodies this sensibility.”

Amid the shifting landscape for bricks-and-mortar retail, Harding views this new concept as “very positive” for Macy’s.

“Retail is not an industry that stands still, and what is happening today reflects an ongoing evolution,” Harding says. “We’ve seen the industry adapt and change to survive—and thrive—for decades. What’s different in this current cycle is that shifts are happening more rapidly and with a greater sense of urgency.”