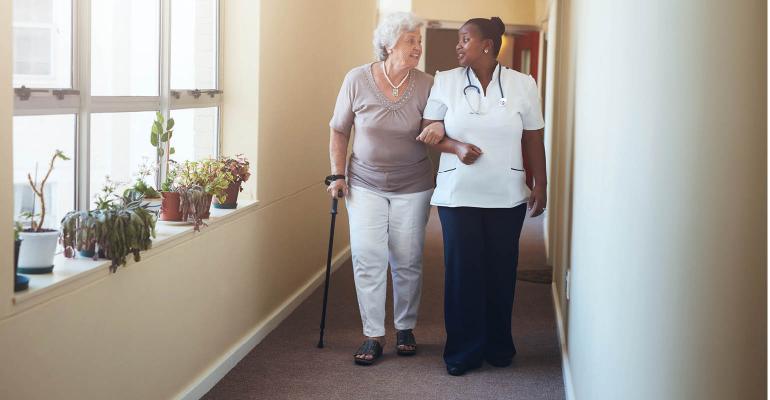 “The sector is still extremely fragmented, with the 10 largest nursing care operators comprising only 14 percent of total supply,” says Bowyer. “We see considerable opportunity in this sector, but only under a very advanced lens.”

Around 32 percent of U.S. nursing homes is operated by single-property owners. An additional 31 percent is operated by a chain with two to nine properties, according to NIC data.

Acquisition volume by private equity buyers in the nursing care space reached $3.07 billion in 2018, an increase from $417 million in 2009, according to data from research firm Real Capital Analytics (RCA).

“We are seeing more and more capital chasing the space. Yields continue to be very attractive,” says Ben Firestone, senior managing director at Blueprint, an advisory firm focused on seniors housing and healthcare real estate. “The private equity market continues to roar like I’ve never seen it in my career.”

But different data sets show different stories. While sales volume increased from 2014 to 2018, NIC data does not show the steady upward trajectory year-over-year like Reonomy research. Still, sales volume reached around $5.568 billion at the end of 2018, compared to around $4.830 billion in 2014, NIC found.

State regulations place a major constraint on the development of new nursing homes, as developers cannot build new properties from scratch without state permission. Legislators require a certificate of need (CON) in order to greenlight the development. The state also manages licensures (CON process), so requirements can differ from state to state. Traditionally, most states have maintained a moratorium on CONs. Very recently, states have started to lift these moratoriums and, in some cases, are removing their CON requirements altogether. This is what is allowing new nursing home development to proceed.

“I think there are certainly buyers for [nursing homes]. We’ve heard a lot about the challenges with the skilled nursing sector over the last few years,” says Bill Kauffman, senior principal with NIC. “That said, there have been properties that have been sold… Now, we have seen over the last couple of years, we’ve seen the price per bed, which is one of the measurements when you’re talking about the actual price of these properties, price-per-bed did decrease. So, the market was adjusting, according to our data, but you did have buyers, depends on the pricing point."

The rolling four-quarter average price per nursing bed was $77,250 in the first quarter of 209, a 3.9 percent decrease from the previous quarter and down 7.9 percent from a year ago, according to the CBRE Seniors Housing & Care survey.

Nursing care construction starts are also at the lowest levels since NIC began tracking the data.

Along with private equity players allocating more capital to the space, public and institutional funds are also increasing investments in the nursing care sector.

For this reason, opportunity zone legislation “may exacerbate sales even further” in the nursing home sector, according to Sam Viskovich, vice president of marketing at Reonomy.