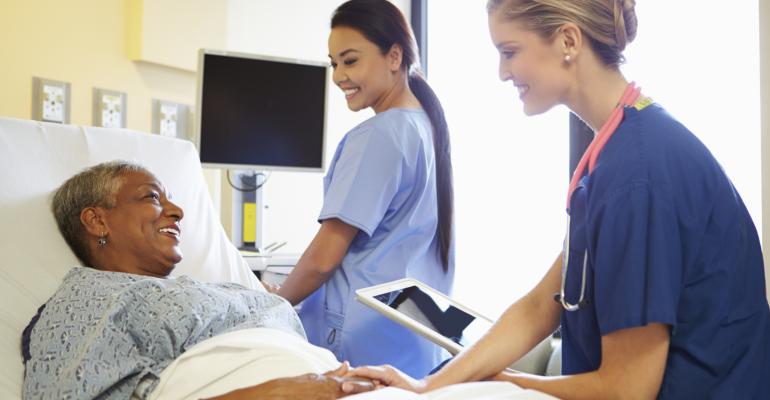 Skilled nursing investors competing in today’s frothy market have new goals to shoot for: High-end quality and short-term stays, to both better serve the patients as well as attract profitable Medicare recipients.

Per-bed sales hit a record for the second year in a row for skilled nursing, at $76,500 per bed in 2014, according to Irving Levin Associates. Historically high cap rates have lowered as well, averaging about 12 percent but going as low as 10 percent, says Betsy Vartanian, head of health-care lending at New York City-based Greystone.

“For the first time in many years, it’s definitely a seller’s market,” she says. “There’s a huge demand for skilled nursing right now. Sellers are getting aggressive prices, so they want to sell. Part of the reason is the attractive interest rates. You’re locking in 3.25 percent debt for a 30-year FHA fixed and, with 85 percent leverage, that’s a once-in-a-lifetime opportunity.”

Another reason is the transition by many owners to servicing short-term patients, those who will qualify for Medicare for most of their stay. According to a white paper released earlier this year by Standard & Poor’s, certain nursing facilities will struggle with contractual escalations in rents, because the nursing home industry will face headwinds from the ongoing shift of patients. Managed-care Medicaid payers typically negotiate reimbursement rates that are lower than Medicare's average day rate of $500, and are also more focused on reducing the length of patient stays.

Hospitals are also incentivized in the patient-shift process. Under new Affordable Care Act rules, if a patient is discharged and comes back for the same problem, the hospital will be penalized. Thus, a hospital will be careful where to refer patients who are going into short-term nursing facilities for recovery. “There’s this huge incentive to try to be the best facility to keep hospitals happy,” she says.

All this has led to a competitive investment field for skilled nursing, says Imran Javaid, managing director of Capital One’s Healthcare Real Estate Group. The high transaction volume is different than the previous seller’s markets in years past, he says, as there are more new players entering the sector today. “Where before there might have been just the REITs buying up everything, now it’s being spread more around to private equity or institutional,” Javaid says. “Folks that had been sitting on the sidelines during the recession are now joining in. We’ll see if they stick around if interest rates go back up.”

The REITs see the opportunity, and are positioning to take part as much as possible. Ventas Inc. is refocusing with its spin-off trust Care Capital Properties, which will take over most of Ventas’ skilled-nursing properties, about 353 assets operated by 43 private regional and local care providers.  The new trust will take advantage of a lack of REIT competition in the pure-play sector, says Lori Wittman, a Ventas senior vice president who will become CFO at Care Capital.

“Values are good, there’s a lot of opportunity to consolidate the market,” she says. “There will be basically two pure-play REITs: us and Omega Healthcare Investors Inc. It’s already a very fragmented market. A very high percentage of private owners only have 25 or fewer properties.”

More competition is expected by all buyers across the investment spectrum, but Vartanian says she hopes newbies are more careful than in years past. Whereas REITs have unleveraged money to throw around, there are also newcomers who might not understand how to borrow in the skilled nursing industry.

“These green operators scare me a little, as acquisition financing can go south really fast if you’re over-leveraged,” she says. “They’ve been encouraged by brokers, who are also finding the sellers who may not have even realized their property now has value, and the buyers are looking to fund more than the property is worth. When money is plentiful and debt is cheap, you have to look at how experienced is the operator, how old are the facilities. You have to be careful who you’re lending to.”

Gary Smith, vice president of health solutions for Mainstreet Investment, says there are still deals to be had. That includes undervalued nursing facilities in many markets where both a fair purchase price for the real estate, and an effective repositioning of the underlying business per the discussions above, will result in significant upside for investors, he says.

“High-quality, well-operated skilled nursing properties remain the most cost-effective, post-acute setting, which must be more utilized to restrain/control rising health-care costs in this country,” Smith says. “We believe the bifurcation will continue to grow with new, consumer-oriented short-stay properties, such as those transitional care centers we currently develop and operate, dominating the post-acute market, but there will always be the need for longer-term care on a residential basis although more on the assisted-living side than in current long-term care, skilled properties.